Imagine diving yourself in a dark, gloomy environment, perhaps enlightened only by some pale ray of moonlight… light with your torch and suddenly there appears a curious animal with unusual appearance… think of the dismay and restlessness that it might assail you if you did not know that the cluster of snake-shaped ramifications that evokes the mythological Medusa, others is but a splendid Gorgon Star (Astrospartus mediterraneus), an echinoderm ophiuroid of the family of the Gorgonocephalidae. 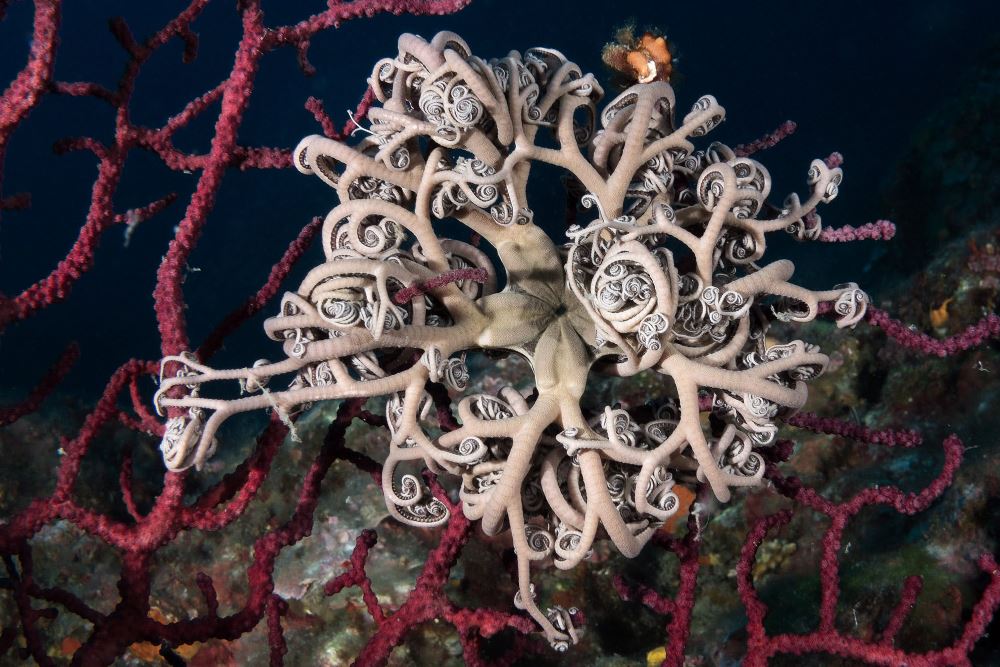 Detail of the Anchorage mode to Paramuricea Clavata.

Echinoderms are benthic organisms characterized by the presence of a calcareous skeleton formed by plates, welded or articulated, placed under the epidermis (dermal-skeleton), often covered with tubercles or thorns. Another feature of all the organisms of the philum is the so-called pentamerale symmetry: the body is divided into five sectors arranged around a central axis, which is why there are so many different animals in appearance as starfish, hedgehogs and Cucumbers (which are actually bilateral-symmetric animals but retain a reminder of the penta-radial symmetry at the level of the ambulacral tube feet, arranged in five longitudinal rows).

Among the echinoderms, the Ophiuroids (Brittlestars) are easily distinguished by the clear distinction between the central disc and the arms. Their size is variable: you reach values of 20-25 cm for the only disc in the Euriale (the largest ophiuroids), in which the arms – generally five – can be branched. The Astrospartus mediterraneus, better known as the Gorgon Star, is an ophiuroids of large proportions with a fascinating appearance and unique morphological and adaptive characteristics.

The scientific name comes from aster (latin for: star) and spartos (latin for: shrub); the english name (basketball star) comes from the habit of curl to basket during the day with branched arms. The italian name of Stella gorgone instead takes inspiration from the myth of the Gorgons (Medusa, Steno and Euriale), figures of greek mythology that had snakes in place of hair, metaphorically associated with the serpentine ramifications of the Astrospartus itself. 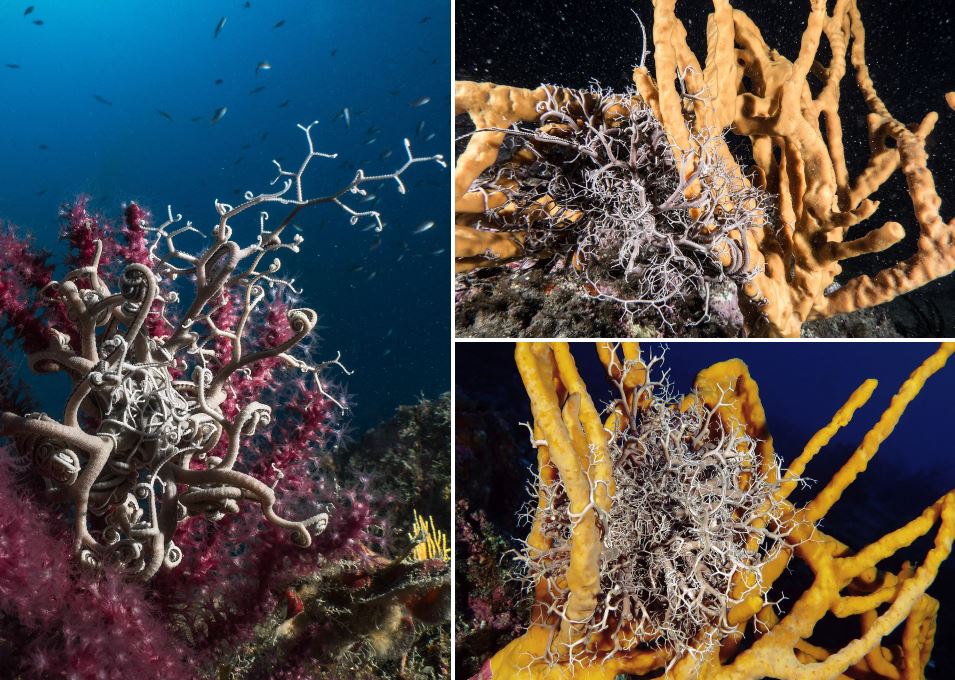 LEFT: Using Paramuricea clavata as a support
RIGHT-TOP: The use of the Axinella Polypoides sponge as support: The photo was taken in the sandy part of the St. Stephen’s Shoal, where the current game allows the Astrospartus to feed easily
RIGHT-BOTTOM : The arms are curled to allow a more stable anchorage on Axinella polypoides

Very rare, photophobic and typically nocturnal, it is located in the western Mediterranean sea, on the coasts of the Atlantic Ocean and Spain. It is common in Algeria and Morocco; in Italy it has been reported in various locations (from south to north: Scilla, Maddalena Archipelago, Tor Paterno, Livorno, Santo Stefano, Portofino and surrounding areas). Because of its photophobia, it can be observed at significant depths, from 30-40 meters (rather rare) up to more than 100 depth; typical inhabitant of the biocoenosis coralline and of debris and rocky territories, it is generally placed on branches of coelenterates such as Paramuricea clavata, Eunicella singularis and Eunicella cavolinii or on sponges like Axinella polypoides, which are used as support for hunting, which takes place mainly in the night hours.

The morphological features include a pentagonal central body similar to that of the most common brittle from which a series of ribs are departed, which are divided over and over in roughly dichotomy mode, ultimately forming a plot tangled with arms, very thin and curled ends: it may seem at first sight a curious cluster of branches of plant origin! The coloration is greyish or beige, with lighter hues at the ramifications; the apical parts are able to envelop themselves: very long compared to the body and snake-shaped, they are deprived of ambulacral tube feet and are opened only at night or in presence of strong currents able to carry plankton in abundance. Posteriorly, small appendices prehensile allow the animal a perfect anchorage on the sea fans. The body has a diameter of approx 4/8 cm, while with arms explained, the maximum width of the entire animal can reach even to 80 centimeters. 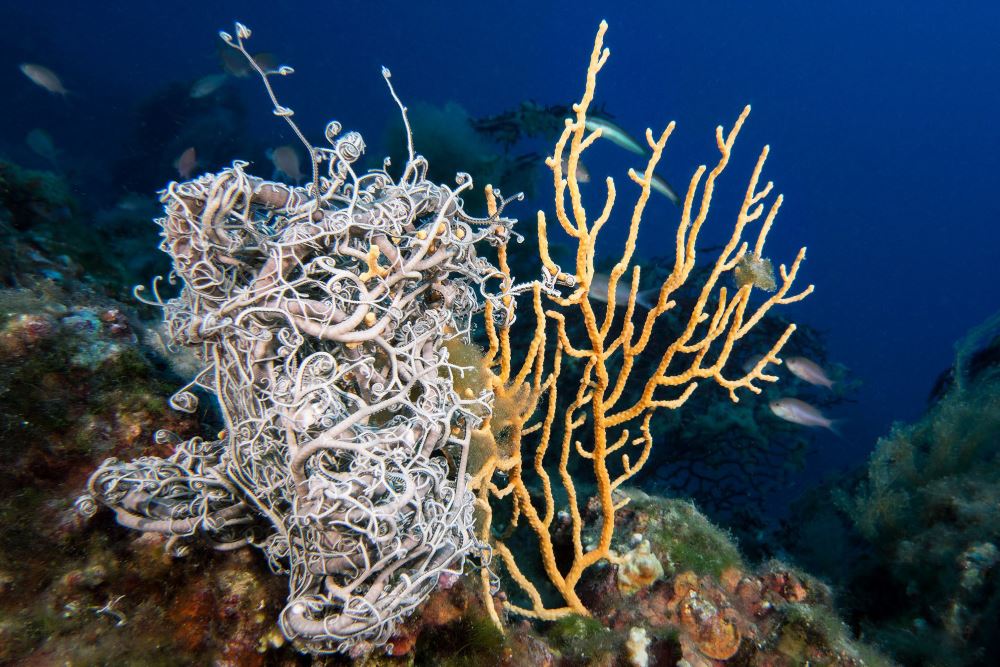 Unlike other serpentine stars, which like to hide in ravines or under the stones, the Astrospartus assumes a typical form during the daytime hours (or in situations of poor passage of planktonic elements), with the arms contracted towards the side of the body from which the mouth opens, made so little visible and protected thus by the light; physical characteristics, camouflage abilities and the usual depths of its habitat make Astrospartus a meeting so beautiful and special as difficult and exciting.

Host – not parasitic – of the sea fans and sponges, the Gorgon star at night captures planktonic organisms by moving the intricate arms, with which it tries to capture what the marine currents carry. The presence of a small and ineffective mouth – it does not bite or inoculate poison – makes in fact the Gorgon star a passive animal filter that feeds, through the open tentacles, of microparticles planktonic (copepods, larvae of fish and crustaceans, annelids…): the filtration is carried out through targeted movements of the arms, to select the preys.

The thin ends of the same hold the plankton through small hooks present on the joints and block it with a layer of mucus that makes it impossible to escape; the preys are then transported to the mouth by contractions of the arm responsible for the capture, while the other arms continue unperturbed the chase, reaching to filter even thousands of gallons of water in a single night. 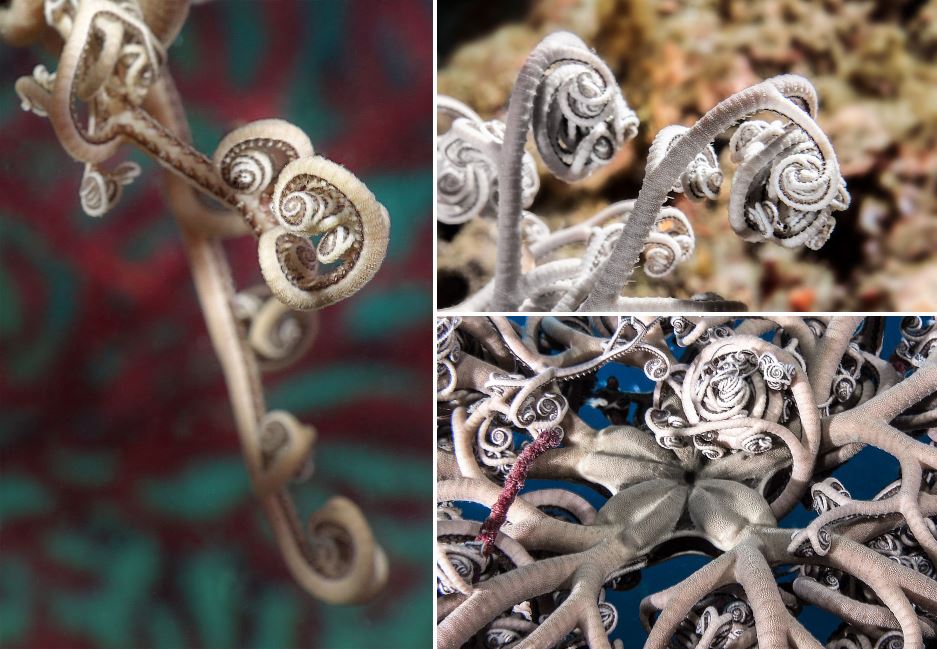 LEFT:Detail of the arms in which it is possible to observe the continuous development of dichotomy of branches, which here appear partly stretched and partly curled
RIGHT-TOP: Highlight the structure of the arms with the typical curled conformation of the species
RIGHT-BOTTOM: that in the central section, five sectors are developed, highlighting the pentaraggiata symmetry typical of echinoderms

In order to be able to nourish itself effectively, the Astrospartus must seek the best currents (in terms of the richness of plankton) by moving from one gorgonia to another until it finds an habitat in which to be placed permanently: in the absence of external agents (nets with demersion, rising temperatures, pollution) will tend to stabilize for even rather long periods.

Its reproduction is little known: certainly it is known that the sexes are separated and that there is no sexual dimorphism; fertilization occurs in clear water and the larva, called Ofiopluteo (like all those belonging to the Ophiuroids), leads a short planktonic life and then fixated on the substrate where the metamorphosis will take place.

I met several times this animal in the marine protected Area Portofino, especially in points of diving characterized by a constant flow of plankton that can serve as nourishment for both the Astrospartus and the sea fans on which it leans; the depth to be met was always between 30 and 50 meters.

On the shoal of Santo Stefano (Imperia) instead we have been meeting in the last years very few specimens that remain slightly higher (the meetings took place in depths between 24 and 33 meters): the peculiarity of the habitat, characterized by a dense network of Sea fans and constant currents, seems to give the Astrospartus a great niche to be occupied to live without too many problems, trawling nets permitting.

The night – or an hunting situation due to strong currents, which encourages access to food – is an excellent time to observe and photograph the Gorgon star in all its wonderful splendor, with arms stretched out to possible prey…Photophobia of the animal makes the artificial light provoke its closure, which is why it is necessary to have a certain speed in the evaluation of the scene and the shot.

LEFT: Here a situation quite rare: in a late twilight dive in Portofino I came across a Astrospartus in motion, ready to stop shortly after on an eyelash to ensure the necessary nourishment
CENTER: The presence of particularly rich currents can lead to a concentration of several individuals very close: here one observes two specimens on two contiguous branches of Paramuricea clavata, in the marine protected Area Portofino
RIGHT: Star Gorgona deployed in an attempt to capture plankton

Always a place of excellence for the development of myths and legends, the Sea with its bottomless abysses well lends itself to stories of women with snakes instead of hair that turns stone to those who look at them, to elusive meetings and to exciting tales… abuse a good so precious with destructive fishing techniques and in general with attitudes that do not reflect love, respect and protection against him is likely to remove even that function of myth – creation without which we would risk to lose even our essence…