After an underwater digital camera and a lens, the third most important piece of equipment in underwater photography is the underwater housing- the essential seating of your camera and lens inside the water and their protective casing so crucial to their survival underwater.

Remember, it is best to consider both the camera and the housing together for your choices would be comparatively narrower if you purchase a camera first and then find it an appropriate housing.

We have researched extensively to list the best 5 underwater camera housings for you based on multiple parameters:

Based on the above criteria, the following are the best 5 underwater camera housings of 2017: 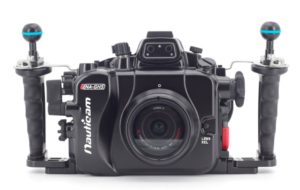 Nauticam offers some of the most incredible underwater housings today. Their housings also feature high depth ratings, making these ideal for use in scuba diving. The Nauticam NA G7X11 for the Canon G7X II, Nauticam NA-D810 for the Nikon D810, and the Nauticam NA-EM5II for the Olympus EM5 MKII, for instance, have a depth rating of as much as 330 feet!

The company also manufactures Nauticam underwater viewfinders. A leak alarm system is an added advantage that warns the diver in case the system detects a leakage in the housing. A fiber-optic connection to the strobes is also provided with many of their housings.

Nauticam housings are also known to feature a highly ergonomic design, which makes it very convenient to operate all controls underwater for a long time. All controls on their housings are clearly labelled, making them much more accessible. 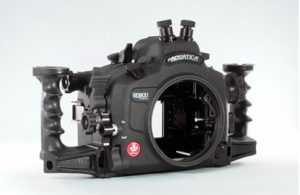 Aquatica housings are built solid and many allow fiber-optic connections to strobes as well. The company has a reputation of listening keenly to customer feedback and that is reflected in their newer designs.

Aquatica housings have high depth ratings, which makes them a popular choice amongst underwater photographers. The Aquatica AD7200 for Nikon D7200 features a depth rating of 330 feet!

Aquatica housings feature excellent ergonomics and provide access to several camera functions. Their housings are often small, operating like the very camera they encase within, making them great options for underwater photographers. Aquatica also manufactures viewfinders and their housings are also known for their comfortable handgrips that make navigating with your camera underwater a breeze.

Some of their housings, such as the Aquatica Digital A6500 feature the use of solid aluminium alloy in their design, which makes these housings extremely robust and tough for use underwater. 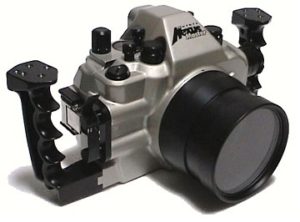 Nexus camera housings are engineered to last a lifetime. Many of their housings have been in continuous use by photographers for as long as 20 years without any sign of damage. The company manufactures lightweight housings, which are considerably compact when compared to their counterparts.

Their recent underwater housings also feature fiber-optic connections to external strobes. Nexus camera housings are preferred by professionals thanks to their high machining standards and design. As an alternative to Nexus housings, you can also consider the Subal housings, which are highly praised for their superior build quality. 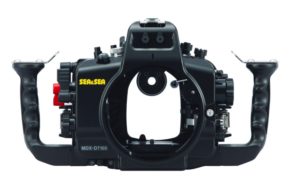 Sea & Sea housings offer ergonomic controls, many of which are also luminescent. Many buttons and levers are made to glow in dark environments underwater- a useful feature to have when shooting in dark conditions. Another useful feature Sea & Sea housings provide is that they convert the TTL (Through The Lens) strobe signal into a light indication.

The housings support External Port Lock and quick Lens Release features, which are very handy to change lenses between the dives. Many of their housings have a high depth rating of up to 330 feet. Optional leak detectors are also a part of their housings depending on the specific camera make and model.

One of the most significant advantages of Ikelite housings is that many of them support TTL (Through The Lens) function with their strobes. TTL is a handy feature that allows automatic control of strobe light output when you are shooting underwater.

Another important feature of Ikelite housings is that they employ clear materials in their construction, which means you can quickly detect leakage if any, should you see any water droplets inside the housing.

Ikelite housings also have great depth ratings and can be carried deep inside the waters; some, such as Ikelite D7200 for the Nikon D7200 being rated safe up to about 200 feet. The brand also maintains consistently good consumer service and is known for the wide availability of parts. Ikelite housings have great user reviews on Amazon, featuring a rating upwards of 4.5 on most housings for different camera models.

Ikelite is generally the best and the most affordable choice when you’re starting out. Remember, underwater camera housings can be exorbitantly priced, many of them costing as much as the camera they encase itself! Go with the best housing you can purchase in your budget without compromising on the build quality.

Another great brand to consider is Subal, which manufactures high-end underwater camera housings. They are known for using all glass ports in their design and are highly praised for their exceptionally great ergonomics. If you wish to get the best in build quality, you can choose housings such as Nexus or Subal, which offer the best in terms of engineering and design.

Ewa-Marine is another manufacturer that specialises in making zip-lock bag-like casings for cameras. While they are somewhat expensive, they are widely used during snorkelling, kayaking, and surfing.

What about the Cheaper Options?

If you own a GoPro HERO5 Black, you can also consider getting a SuperSuit instead, a fine underwater housing specifically built for the action cam. With the GoPro armed with its SuperSuit, you could take it to depths up to 60 meters underwater!

To summarise, an underwater housing plays an extremely crucial role in protecting your camera underwater. It is best to choose a housing and camera together when you plan to upgrade your equipment. This way, you will have the most options to choose from rather than being confined to a few choices of housing makes for your specific camera model.

Another thing to lookout for when purchasing an underwater housing is the access to all important controls underwater. Make sure the housing you choose provides you controls over all important controls you use underwater. Ensure that the dials and buttons for aperture and shutter speed are ergonomically designed. Fiber-optic connections to external strobes are new features that are being implemented in many new housings and are a useful function.

Whichever housing you choose, make sure you maintain your equipment well, attending to it after every dive. This way, your housing would serve you as a faithful companion, lasting a lifetime!