The 16th CMAS World Championship in Underwater Photography was held in La Paz, Mexico from 22nd to 27th November.  35 photographers from nineteen countries and models competed for the medals in five categories – fish, close up seals, macro, wide angle without model and wide angle with model.  The image files were JPEG with no adjustments after exposure. In the categories wide angle and wide angle with model it was acceptable to make in-camera double exposures.  The CMAS World Championship system only gives points to the ten best photos in each category, which makes some kind of extra excitement for the competitors and normally causes some discussions regarding the jury’s work after the final results have been presented.

The members of the jury were: 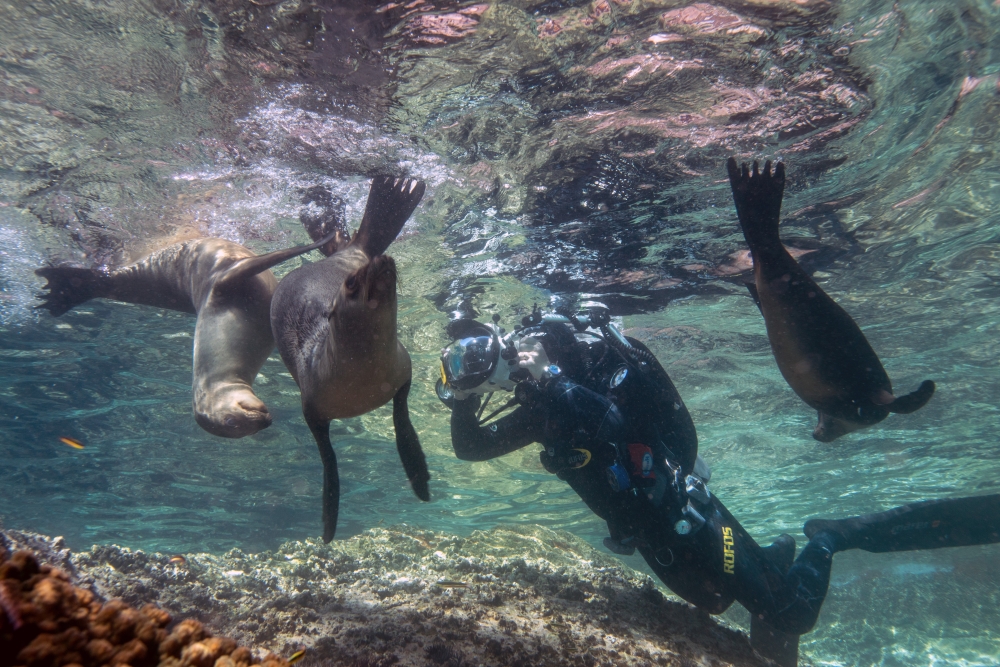 The sea lion colony on Los Islotes is the main reason for many tourists to go diving in La Paz. The colony is quite crowded with divers, snorkelers and sea lions, but it also offers a great variety of fish and macro life. A new rule tells snorkelers to wear life jackets, which give scuba divers more space under the surface.  On this site there are quite strict rules for interaction between humans and seals. It is important to listen to the advices from your guide to avoid accidents. The topography contains caves and rocks. Diving is normally downto 12 meters. The sea lion puppies are really playful and will give you a great show. 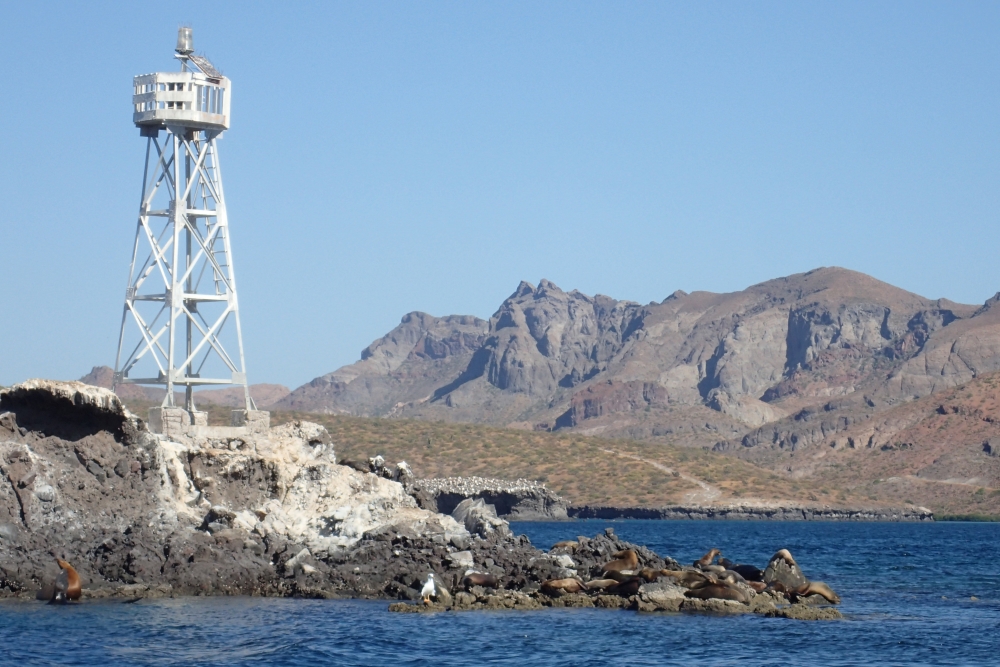 At San Rafaelito the diver has both macro life at the coral reef and sea lions. The sea lions here are larger males without a family, so they are not as easy photo subjects as the sea lions at Los Islotes. The place would be really nice for photos with “Snell’s window” where you can have both the light house and sea lions above surface and corals below.  It is also a very good spot for macro photography. 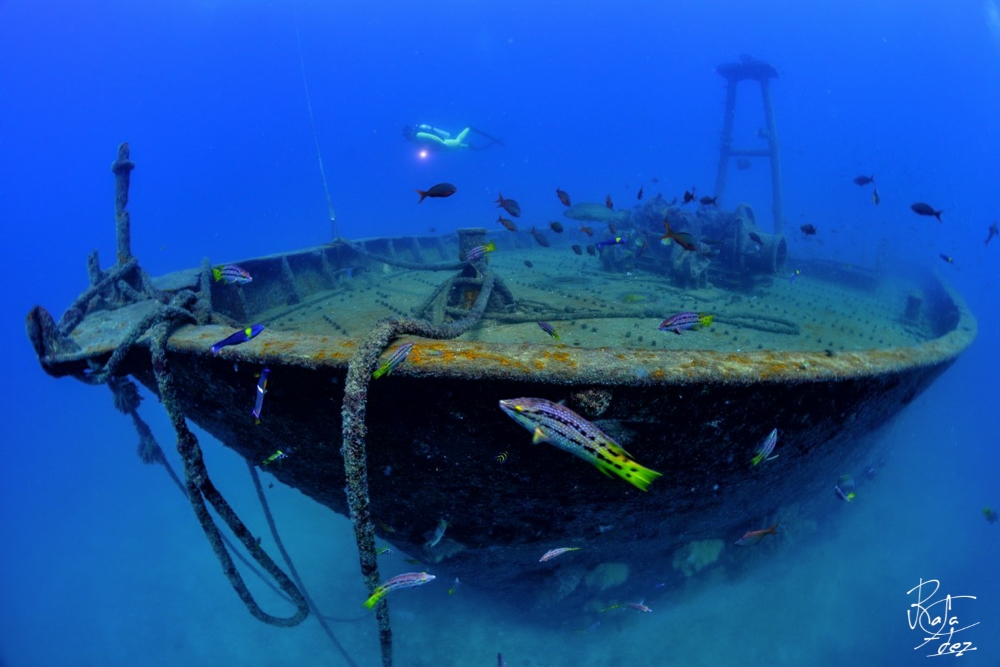 Fan Ming is a Chinese ship that originally served in transporting illegal immigrants. It was confiscated by Mexican authorities and scuttled in 1999 to become an artificial reef. At this spot the diver will find schools of fish, nudibranchs, turtles, occasional seals and, of course, the wreck. The diving is easy and the maximum depth is about 22 m. 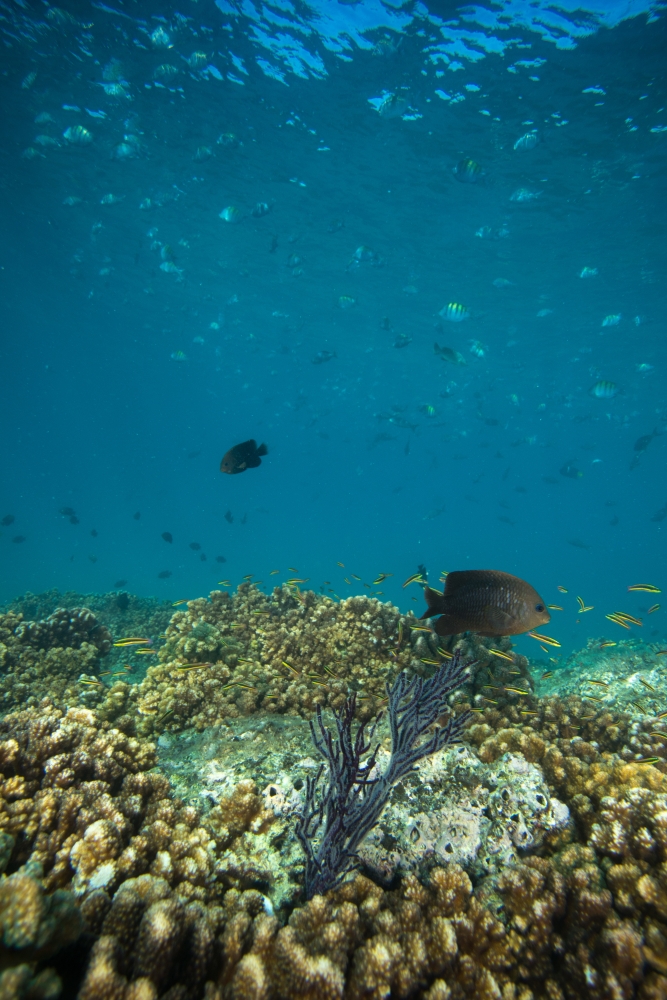 This is a natural coral reef where you could find large schools of fish, diving sea birds, lobsters, turtles and beautiful corals. The reef make both a perfect place for photos.

All over winner – Rafael Fernandez Caballero 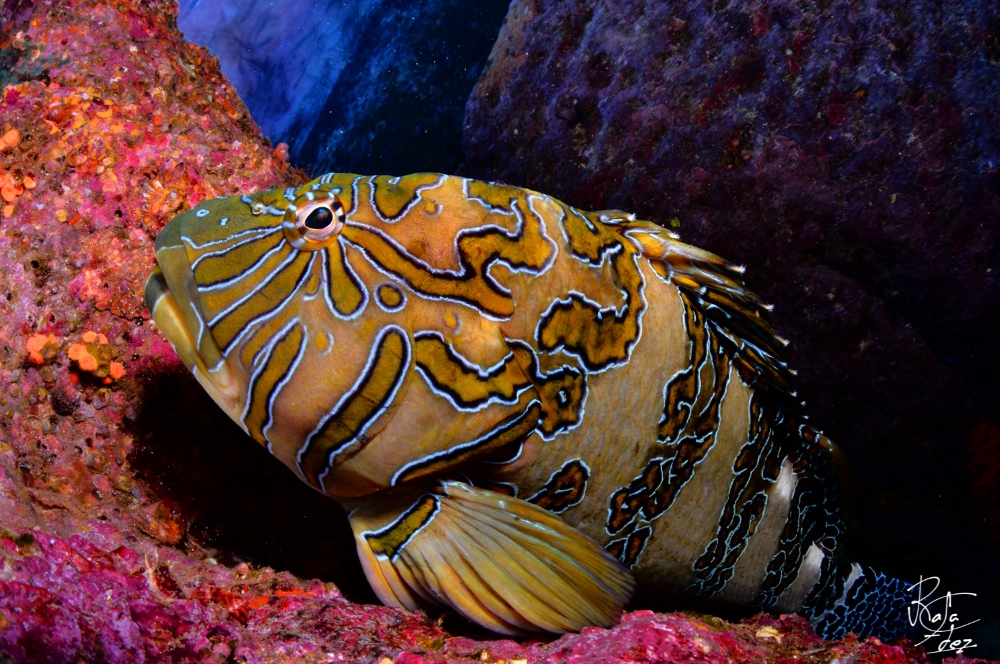 Rafael Fernandez Cabrello won the fish category with this image of a giant hawkfish (Cirrhitusrivulatus), something none of the other competitors had seen during the competition. The image is quite out of the tradition for winning fish in CMAS World Championship competitions, but the odd fish, combined with a classical diagonal had a good effect on the jury. 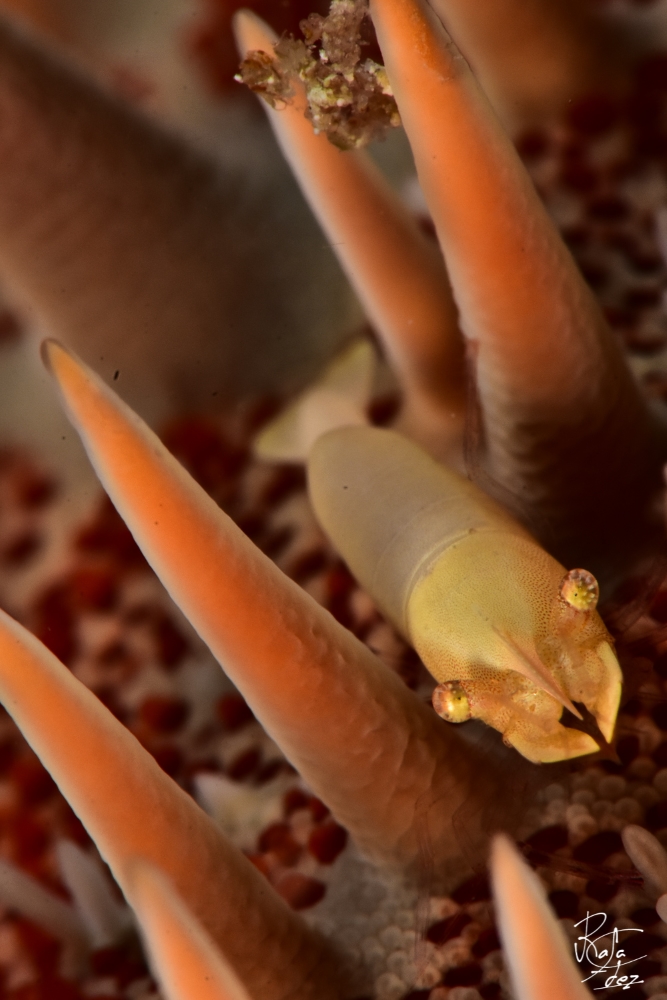 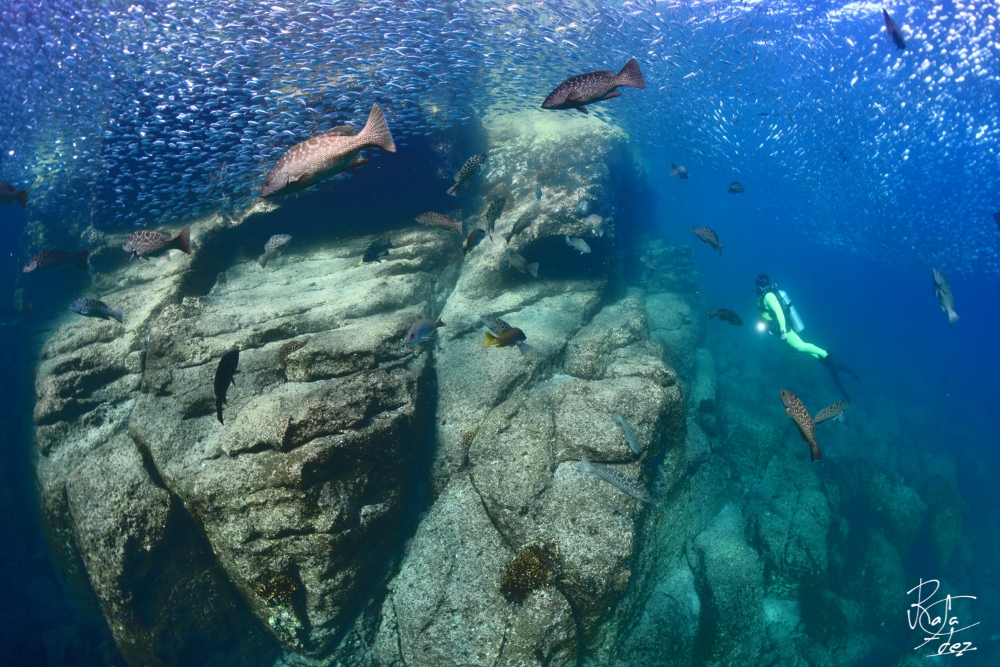 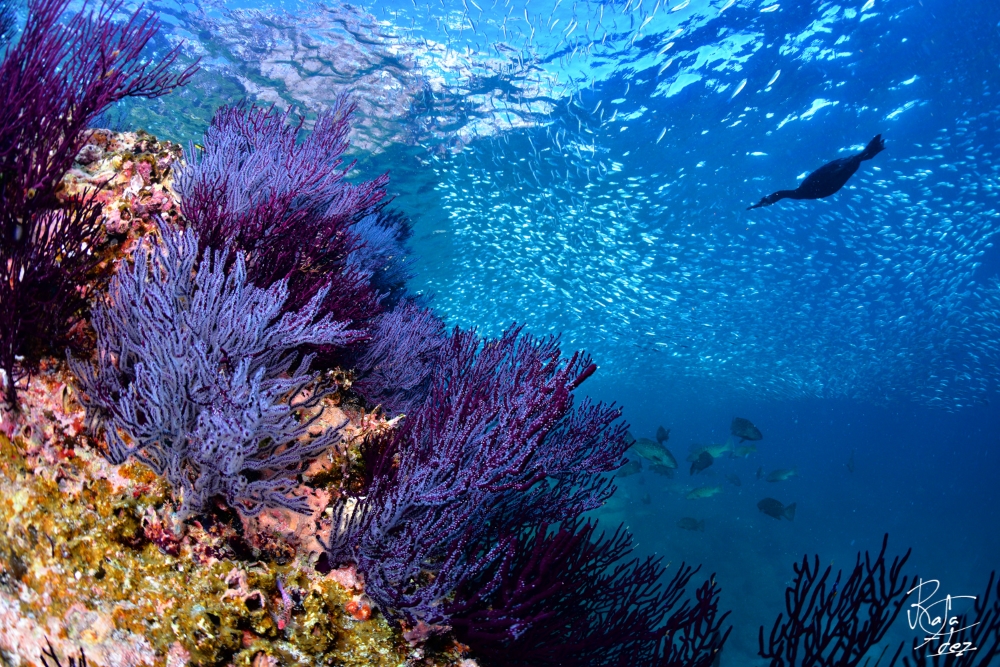 Rafael Fernandez Caballero won the wide-angle category by being both observant and patient. The hunting cormorant up right must have been a great challenge to add into the motive. At this place, most of the competitors chose to do their macro shots, but he stayed with wide angle and succeeded. Gold medal. 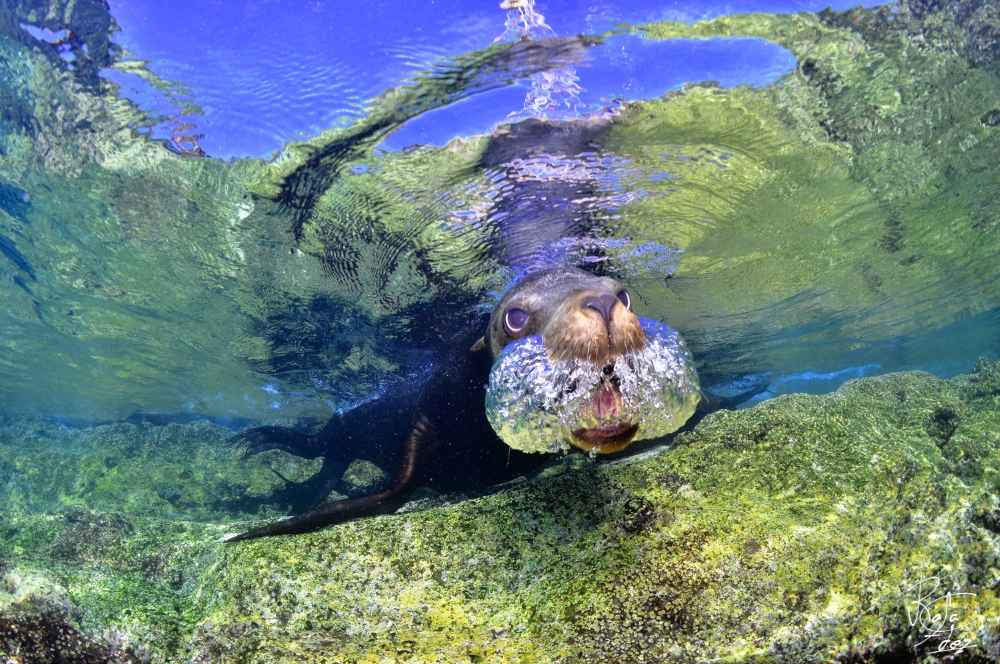 With two gold medals  in “fish” and ”wide angle” and one silver medal in “close up with a theme”, Rafael Fernandez Caballero with his assistant Oskar Luna were the clear winner of the 16th CMAS underwater photography world championship. He told the following story about his work and experience in the competition:

“Since I was a child I have always dreamt of winning a world championship. Honestly it has always seem an unachievable dream for me, but today as a 22 year old I can say I achieved one of my dreams! Thanks to my father, who is underwater photographer as well, my life has always been linked with the sea and photography. Since I was 17 years old I have participated in underwater photo contests.

To get a winning picture in a world championship is obviously a really hard job. Not only because of the best underwater photographers all over the world will do their best, but because there is just two competition days and everything can be different to what you had planned.In this world championship I got two golden medals and a silver medal. An excellent result which made me the actual world champion. Along with the others from Spain (Jesús Yeray and Abigail Martín), weachieved second place so as a nation in the world championship as well.The work behind those pictures is bigger that it can seem. In order to achieve a good result the training days before the competition are an essential part in order to prepare a plan A, a plan B and even C for every category, picture and dive.

This championship wasn’t easy at all. We had to prepare as many dive sites as possible; and preparing 12 dive sites in just 2 weeks is not an easy job. Moreover the things that we had trained for such as multiple imaging and other effects were prohibited at the very last moment. For that reason we had to improvise, try to do our best taking into account the things that we could find on every dive and all the possible problems that we could have.

Close-up with a theme: Seal Winner 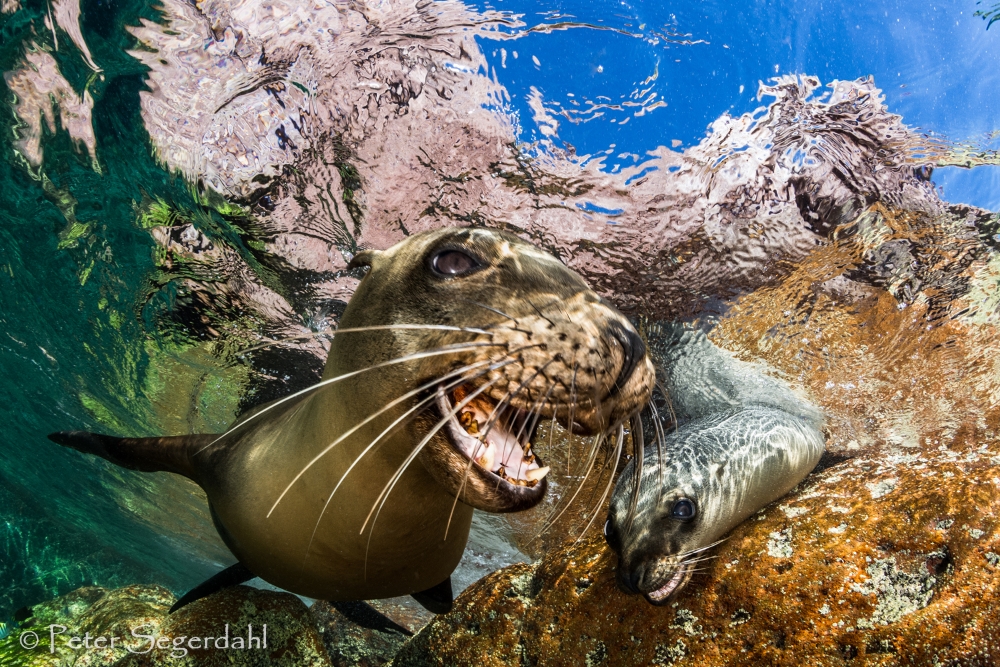 It is just to praise winner Peter Segerdal’s comment before the competition, “It’s no problem – just wait and they will come to you”. On the competition day he changed tactics and used his assistant, Ulf Gringsjö, as a shepherd. That seemed like a good tactical choice. His wide angle with a sea lion was least controversial image to be ranked.

His own words about shooting this image:

“After some dives at Los Islotes, I realized that the puppies would produce the winning images. They were just so chaming and cute.Before entering the competition zone, we had optimized the setting in the camera according to shutter time, aperture and settings of colors / contrasts to get the ultimate image in shallow waters with lots of light. If we kept shallow and near land where the puppies were, some of them would now and then pose in front of the camera.Our plan on the competiton dive was therefore to stay shallow and and wait for the puppies to pose.After a while, we saw a juvenile seal resting in the sun. To get its attention, I started swimming up and down in the water. I got its attention, but the seal didn’t seem eo want to enter the water. Suddenly the seal came out to me, but it was too quick, so I didn’t manage to take a photo. After a while, another seal came by, trying to claim his place on land, still wondering what Ulf and I were doing. At that moment, Ulf realized that if he worked as a seal shepherd, using his hands as eyecatchers for the seal, the seal could enter the water in the right direction. I prepared for the shot and in one of the first two tries, the image was taken. I already had some good seal images, but this was just what I wanted. At that moment we went to the surface. After inspecting the camera display for a while, we agreed we would not get a better seal photo and started working on other subjects.” 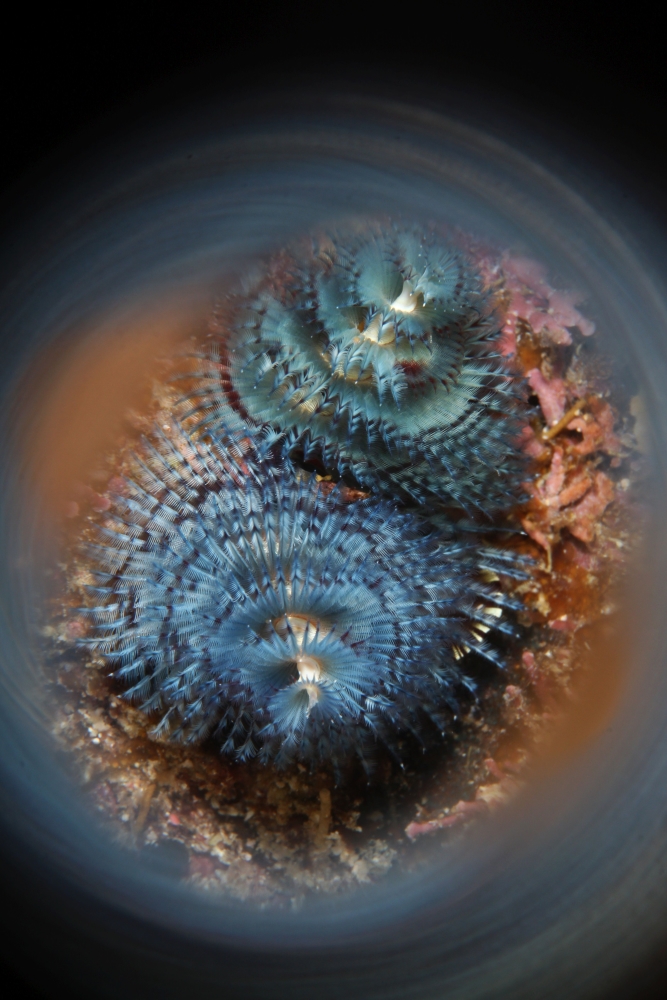 Winner Dalibor Andres with assistant Borna Andres from Croatia won the gold medal in macro photography section for this Christmas tree worm. To make the spinning look, he used a popular technique, using a tube in front of the lens. This technique makes a soft frame around the subject, and has produced lots of winning pictures the last two years. 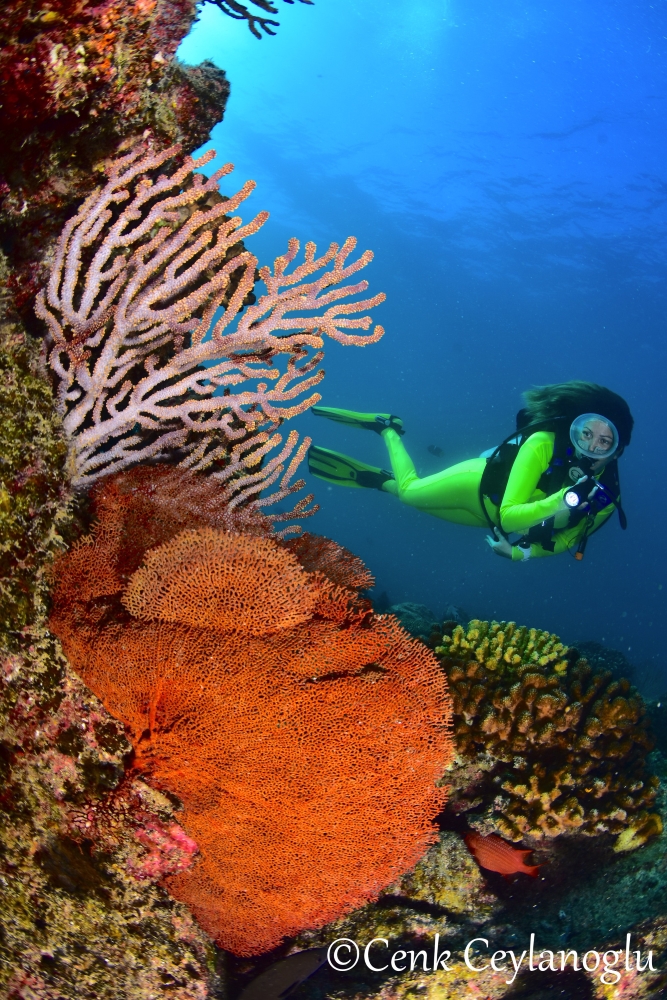 Cenk Ceylanoglu from Turkey got a gold medal with this photo. He chose a quite traditional composition and theme with a model using a torch, but in contrast to the traditional CMAS World Championship winner, he chose to have his model in a normal diving situation and not posing in front of the sun. The usage of the yellow suit gave him enough contrast with the model to make her a natural point of focus.

As Cenk tells about the planning and shooting of this image himself:

“I have been participating in national and international underwater photography competitions for more than 10 years. My assistant/model who is also my wife, always wants to have good results in wide angle with model category since she is a part of the photo herself, and so do I. In recent yearswe usually took photos with a silhouette model on the background and a close focused subject in front. I really thought that this was the best way to take a wide angle with a model photo. But my silhouette photos did not make top 10 in last 2 championships. So I changed my mind and decided to make something different. I bought pink and yellow suits for my model and I planned to take a photo in which the model is the main subject. We had many training dives in Turkey and in La Paz and we were very much ready to take our prize photo. All we needed was a nice colorful reef and the lovely gorgonians in Swanne reef of La Paz made this photo possible. I preferred my model to swim along the gorgonians instead of standing still. We are very happy that all our plans and trainingthat took us to the gold medal.”