The Cuckoo Wrasse (Labrus mixtus, whose Latin name refers to two essential characteristics: pronounced lips and stunning mixture of colors) is a marine fish belonging to the order of Perciformes, the family of Labridae and the subfamily of wrasses.
The Labridae family is extremely common in the Mediterranean: all the representatives show full and protruding lips, a long dorsal fin with littlestiff spines and swim moving the pectoral fins. Wrasses, curious and colorful inhabitants of our sea, represent a sparkling example of biodiversity. 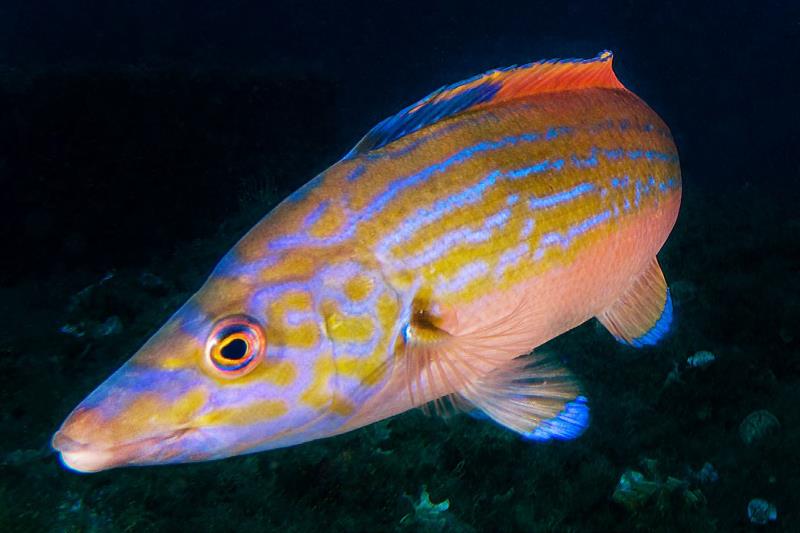 The Cuckoo Wrasse distribution area goes from Norway to Senegal and includes the Mediterranean Sea, especially the western one, where however it is not common.
It is not a migratory fish: according to the IUCN lists, demographic trends of the populations are stable.
It frequents rocky bottoms deeper than its congeners: it rarely rises above 15/20 meters and goes down up to 200 meters.
Their usual depth changes according to sex and season: if juveniles live in shallow water, adults prefer colder and poorly lit waters. In spring / summer, they can be met also at 15/20 meters, while in autumn / winter they tend to live deeper. 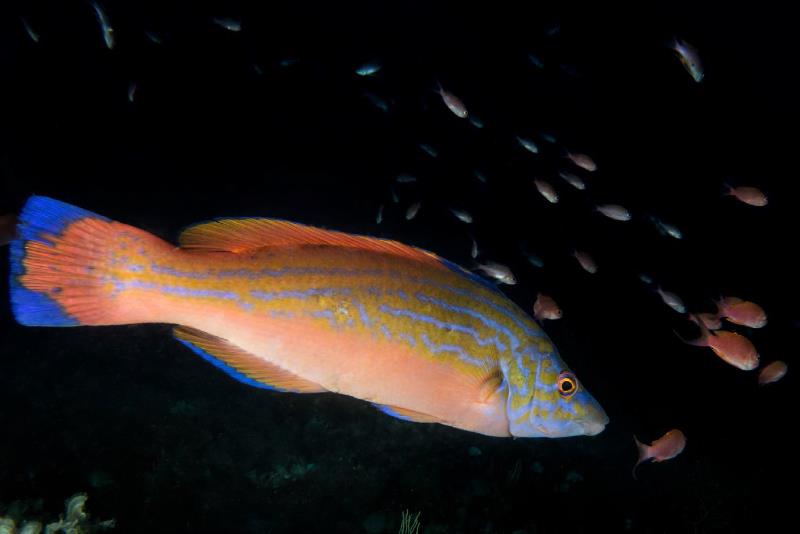 The presence of Anthias anthias around the male gives us an indication of the depth where it is possible to find it: the photo was taken at about 36 meters deep.

Cuckoo Wrasse usually live among the Posidonia oceanica leaves and close to rocky bottoms among which, females in particular, love to camouflage; often they are also found in the dimly lit coralligenous, where they dart between cracks and crevices in which they can quickly hide. 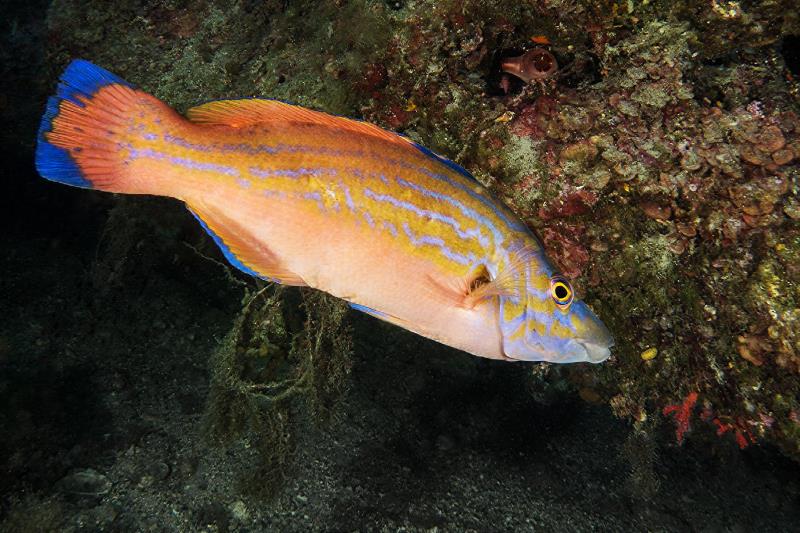 Colors and physiognomy of the dominant male: note in particular the full and protruded lips, as well as the colorful patterns on the lateral line.

The coloring changes according to age, sex (transition) and reproductive period, when the male shows spectacular nuptial coating. 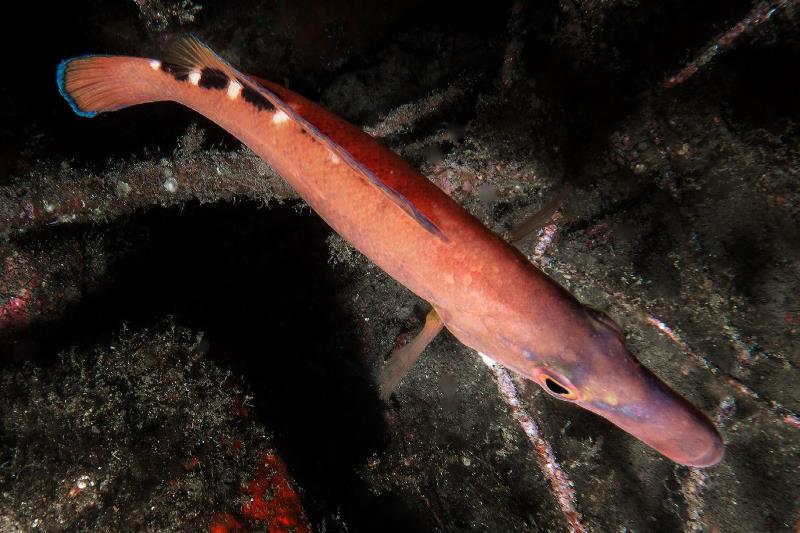 This shy female makes us appreciate the streamlined figure, the white and black spots in the final part of the back and the use of pectoral fins to move.

A clear sexual dimorphism is in fact evident by examining the differences between primary and secondary coloring.
The primary coating, the female one, distinguishes easily by the less bright colors (salmon pink, sometimes reddish orange), and for the presence of three – rarely four – dark spots in the rear of the back near the tail, interspersed by four smaller white spots. Irregular blue lines surround the eye and are present also in the secondary coating – the male one – in a much more evident way. 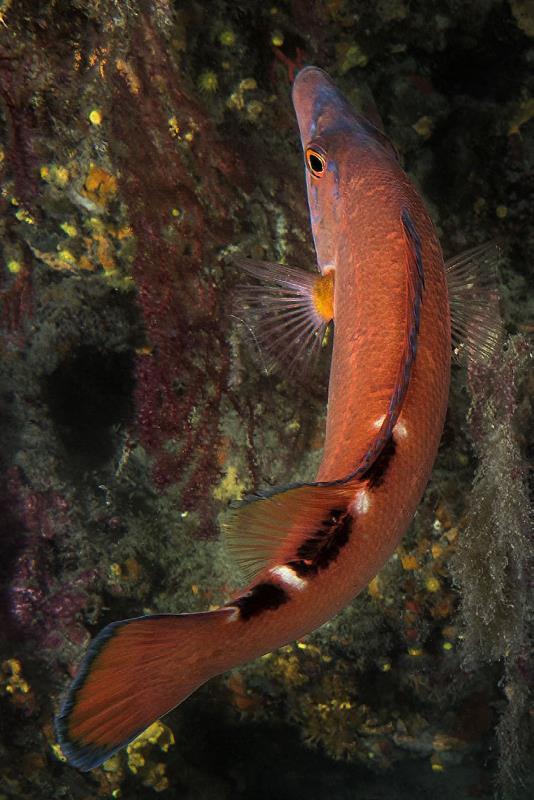 Notice pectoral, dorsal and caudal fins with distinctive shape and color, in addition to the white and black spots at the dorsal end that characterize the primary coloring. 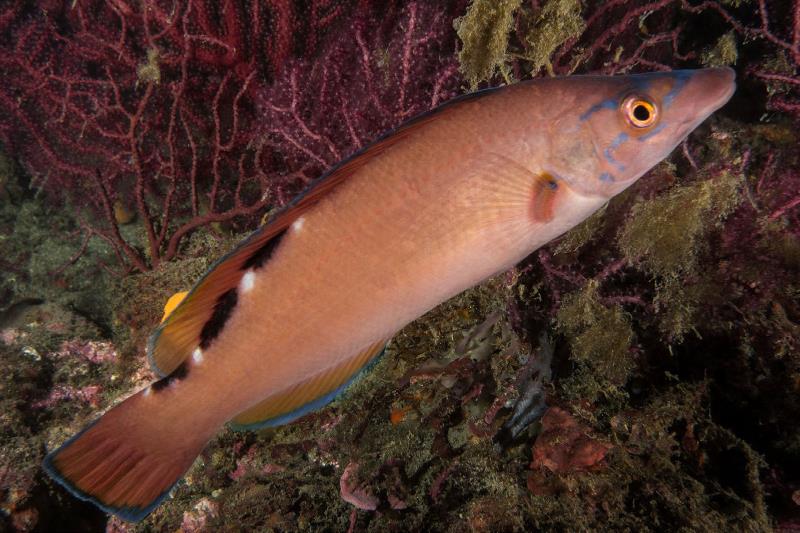 The salmon-pink coloring of the primary coating stands out along with the presence of the blue borders on the fins, which will then become much more evident and vibrant when the sexual inversion is completed.

The head (sometimes also a large part of the body) is yellow while the rest of the body maintains an orange base. In the reproductive period, a large white area appears on the neck and forehead.
They are quite large fish (35-40 cm in length), females slightly smaller (up to 30 cm), slow growing; the maximum reported age is around 20 years. 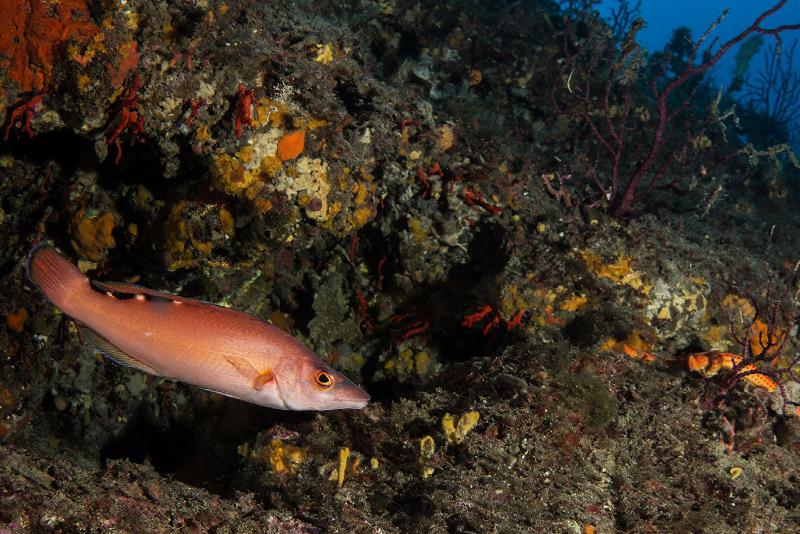 A distrustful female in its typical habitat: crevices where to hide and higher depths than its congeners, as suggested by the presence of red coral (Corallium rubrum) and red sea fans (Paramuricea clavata).

Cuckoo Wrasse feed on invertebrates, especially hard-shelled shellfish, but their diet also consists of small fish, mollusks and worms, crushed by their pharyngeal teeth.
The species is protogynous hermaphrodite, whereby the females, because of hormonal changes, turn into males as they age.
Sexual inversion usually become complete over a period of about seven months when the wrasse is about four or five years old.
Sometimes it can happen earlier, in case of sudden death of the dominant male who usually has a harem of a dozen females.
At that moment, one of the biggest females becomes the dominant male in turn: the perpetuation of the species is thus seamless guaranteed. Juveniles are divided into primary males and primary females (usually in fairly balanced proportions). Once grown, the primary males maintain the orange color, but can-not reproduce unless in the area there are no dominant males. Primary females remain the same color until they mature, turning into dominant males. 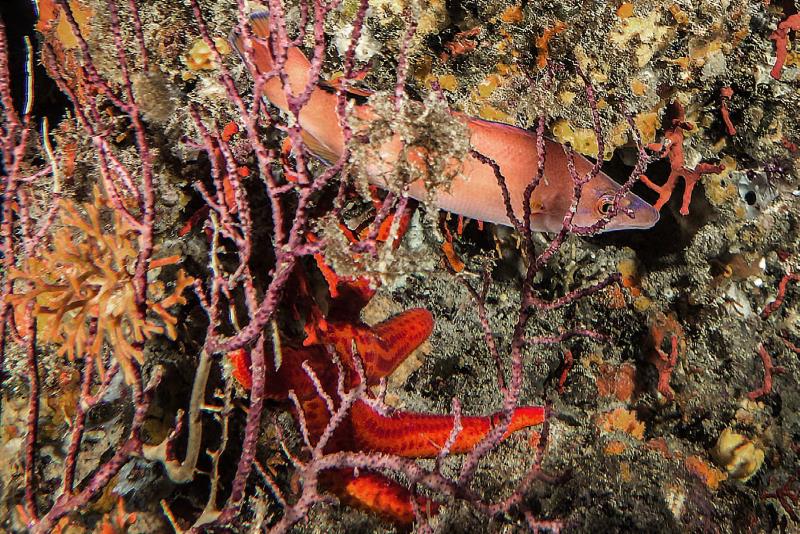 Hardly approachable unless using extreme patience, females never leave the elements of the coralligenous where they can easily camouflage to escape predators.

Reproduction takes place in spring or summer, depending on the locations, and the adult males’ behavior become decidedly territorial and aggressive towards rivals who dare to approach the nest, previously prepared by interweaving meticulously seaweed gathered here and there and placed on gravel or rocky bottoms.
The female lays there up to 1000 eggs of a size ranging between 0.5 and 1.1 mm.
The male who succeeds in the furious fighting will fertilize them and will remain attentively on guard for the next 24 hours.
At that point, the larvae, transparent and wrapped by a bubble that protects them as long as the mouth and eyes have not formed, begin their pelagic phase that will last several days (sometimes even a month, depending on temperature and currents) until they reach again the bottom. From the beginning of the pigmentation to the adult size, it can take around 24 months. The species is extremely suspicious and difficult to approach underwater as well as quite rare to meet. 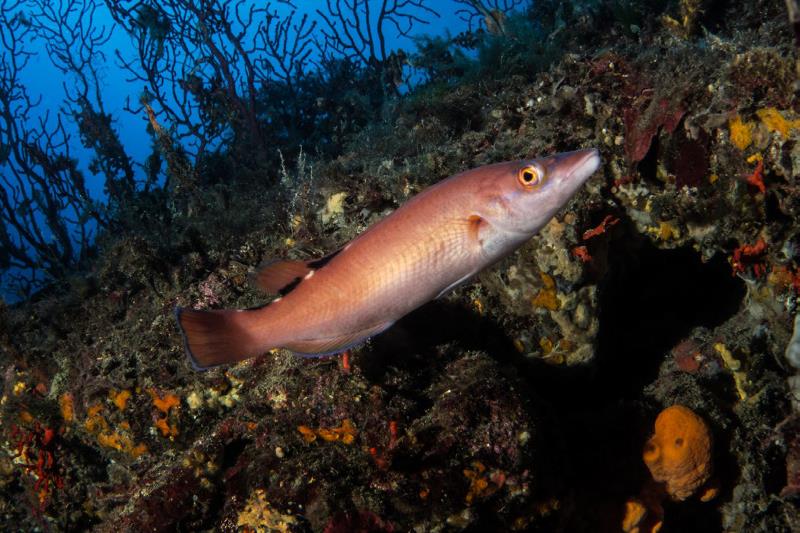 We can seize sexual dimorphism – besides observing the coating’s coloring – also evaluating the differences in shape between females and males: the former have a more streamlined body and elongated but less fleshy lips of the latter, which have instead a more rounded body.

However, a calm and detached behavior sometimes allows a fairly close approach. If the females remain shy and watchful, the territorial males sometimes prove to be very confident and incredibly curious. Very active during daytime, at night they sleep propped on one side. The photos in this article were shot in the Ligurian Sea, mainly in the Marine Protected Area of Portofino (province of Genoa), although in a deep dive point at the Santo Stefano shoal (province of Imperia) sometimes happens to meet this colorful inhabitant of our Sea. In relation to the habits of the species, encounters become more frequent during the summer and almost impossible in winter. The flamboyant shades of the cuckoo wrasse could ideally reflect its name, acting as a decoy towards those who consider the Mediterranean Sea devoid of encounters and colors, which are more frequently associated to tropical seas. Although clearly less simple to enjoy, ours is a Sea plenty of surprises with a strongly reflective character. Knowing it more deeply may help us appreciating it more, living it, respecting it and, ultimately, perhaps to appreciate even more ourselves and our relationship with that Blue that calls us, attracts us and welcomes us, but towards which we are not always capable of love gestures.