Dhivehi Raajie Get bored is a pity

…I watch the world from a porthole, and I am slightly bored…

Recited Gianni Togni in one of his songs in the early eighties, when I was a child.
My mom used to listen to this song quite often, and as soon as the record started playing, I started dreaming of faraway seas.

The boat keel cuts the long waves like butter. The gray sky promises nothing good. Scuba gear has been securely tied astern. The cushions have been collected.
We are sailing through the channel dividing Malé South from Felidhoo atoll.
A stiff wind sweeps the sea surface. Water splashes rise up and lash the bulwark. The captain has been bossy: “everybody remains in the lower deck!” I splatter my nose against one of the many portholes of my bright cabin at the second deck. More a window than a porthole and watching the world through its glasses, I am not getting bored at all! I am in Maldives, the “Dhivehi Raajie”: meaning the Islands Realm, where getting bored is a sin!
I visited this country many times, diving along its coral reefs, but this is my first LIVE ABOARD. According to many, this is the best way to enjoy one of the most extraordinary underwater landscapes in the world.
During 2006, under the sole atoll of Male North, 958 divers dove simultaneously. Who knows how many they are to date: no one counts divers anymore. For sure, it would be a record figure, enough to suppose that divers oversaturated Maldives. Yet, no other boat takes shape on the horizon.

We are enjoying an absolute exclusive on the coral reefs and along the many white sands stripes, offering the chance to stretch our legs on dry land.
I keep on watching through my porthole: this long sailing leaves me time for thinking.Waves are chasing each other, as well as my thoughts. I question and answer myself. I realize that little is known about this country, considered as a mere tourist product.
Besides, how to blame those who do?
Talking about Maldives, we all have the same visions: white sands, clear blue waters, colorful fishes, sun, relax, luxury… what a sadness!
As though a foreigner was thinking of Italy exclusively as the country of pizza and mafia… and it could even be, except that our history is well known and documented internationally.
But the Maldivian history is not! The President of the Republic of Maldives is asking loudly, and since long time, not to consider these 1120 islands just as a “holiday industry”, although tourism is what they live on.

People like us: workers who scrape out a living, others who do not give up the cell phone or status symbol lovers.
The most of them live in the smallest capital of the world: Malé.
It may be small, but suffers from the great problems of all western cities: shabby and congested roads (there are more cars than souls), juvenile delinquency linked to drugs, lack of work.
However, that’s another story: to the Maldives, you go on holiday!
Sailing across the atolls helps opening your eyes: there are penitentiary islands, dump islands, manufacture islands, even a coca-cola island! In Maldives they prey Mohammed, eat tuna and dance “bodubero”, but only men do.
Where are the women? I’d like to find it out and feel like finding an answer to my many questions.
I’ve been told to go to FELIDHOO, the “virgin” atoll, where you still can breathe Maldives air: and there’s where I’m going.
Compared to other atolls touristically more open, Felidhoo (a.k.a. Vaavu) is less developed. Unusually shaped like a boot, it is the primary destination for diving safaris, thanks to the wonders guarded under its waters and the presence of remote and uninhabited islands.
Out of the 15 islands composing the atoll, 2 host tourists resorts and locals, kind and welcoming people, inhabit 5.
I like the proud calmness of Maldivians.
Women, of a disarming beauty, cook and take care of the children. In the streets, you can still feel the smell of “bonito”, smoked fish, considered a delicacy.
How beautiful is seafarers’ simplicity!

I discover that the world is the same wherever you go: sitting in the middle of the village, with the fishermen and their families, I listen to stories of fishing and sea tales telling of a magical place: the underwater cave of Fotteyo.
Laying down on an exotic coconut fiber swing, rocking and watching all the shades of blue painting the lagoons, I feel suspended in time and space and try to imagine the hidden life beneath the surface at “Fotteyo caves”.
Horizon line is barely perceptible. I start feeling like a siren in a fishbowl: I need to return to the sea. I need to dive and see through my own eyes if the tales I listened to are real or just fishermen’s overstatements.
There the dhoni, a traditional Maldivian boat, takes us close to the external angle of DHIGGARU FALHU: that’s the name of the reef guarding Fotteyo paradise.
As soon as my guide checks the current direction, I make my giant’s step and jump into the water.
Keeping the colorful wall on my right, I immediately sink to 20 meters deep. Many surgeon fishes, close enough to be touched by hand, accompany us. In the deep blue of the open waters, small tunas patrol the area searching for food and a first white tip shark makes a sudden foray towards us, but goes away just as quickly.
Going deeper, the wall becomes even more colored. Fragile soft corals, made turgid by the current, swing like flowers in the wind. 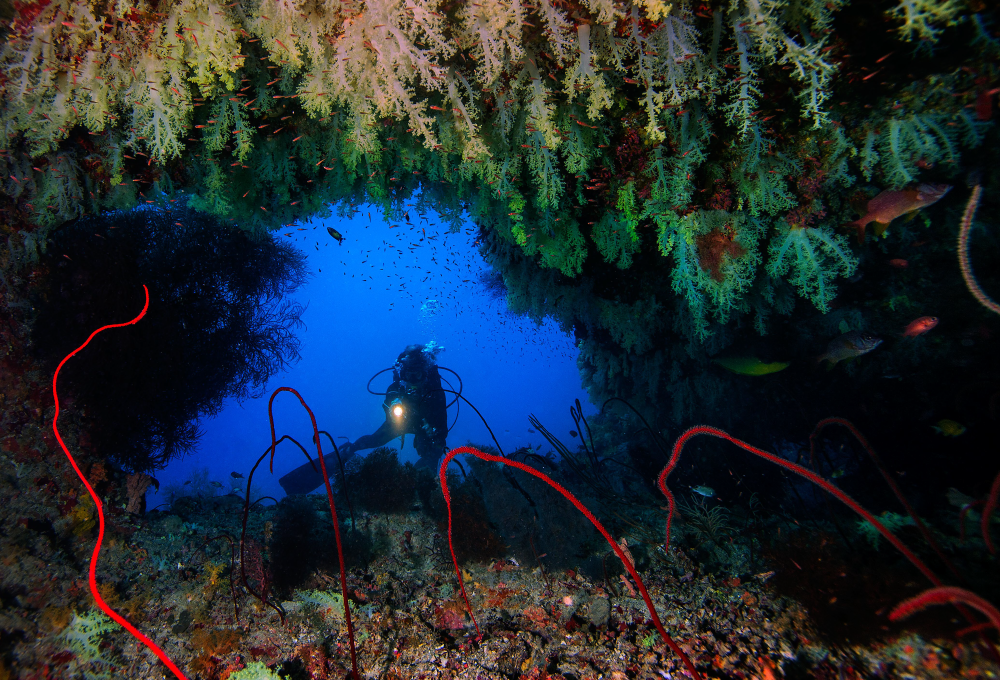 At about 30 meters deep, the beauty apotheosis awaits us, just around a ledge of the reef. A wide cave, or rather a through tunnel, opens inside the barrier. Hundreds of soft corals hang from the ceiling as juicy cherries from a tree: a yellow, orange, pink, phosphorescent green rainbow. From the bottom, lush branches of carmine red whip corals try reaching the vault. At the tunnel entrance, black coral bushes provide shelter to an indefinite quantity of barrier fishes.
I swim cautiously inside the cave: I don’t want to lift any sand, thin as baby powder. Outside the tunnel, the show goes on: soft corals continue covering arches and balconies. A school of jacks surprises me from behind and swims inside the “cherry tunnel”: I follow.
I spend my last minutes diving among hard corals covering a plateau only 14 meters deep.
Clouds of fusiliers enliven the surroundings while oriental sweet lips, moving together with the current, keep us under control. A shy green turtle grazes here and there: I try to get closer, but she disappears in the rising daylight.
My first day diving at Felidhoo atoll is almost over.
I give myself a walk along a sand strip. My feet softly sink and caressing weak waves temper the heat rising from the shoreline.
I watch the sunset lights in the sky: I never observed it that intensely.
A smile enlightens my face: tomorrow is another day in Felidhoo!

WORDS and PICTURES by Isabella Maffei 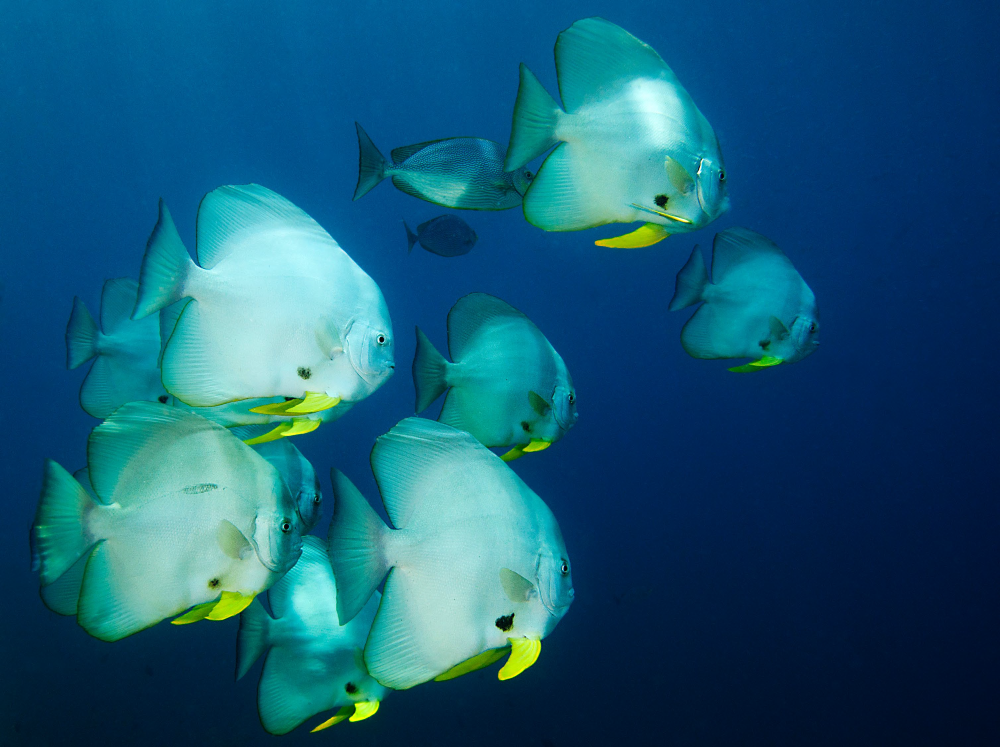