As underwater photographers, we have the privilege of telling stories through our images. I became an underwater photographer with the hope of using my images to change the public’s misconceptions about sharks, and to show the world that sharks are not the vicious monsters so often portrayed by the media. But then I realized that I also had the potential to change other misconceptions through my images, namely about what those with disabilities are capable of. You see, my 19-year old son Richard has autism. And he is a certified Open Water scuba diver.
Richard was diagnosed with autism when he was 4-years old. At first the doctors thought he had a speech delay, but after subsequent testing the doctors told his dad, Sean, and I that Richard did indeed have autism. All of the hopes and dreams I had for my little boy suddenly seemed to fade away. I didn’t know what the future held for him. I didn’t know what kind of life he would have. And that terrified me.
But there were positives. Richard was smart, kind, and most importantly, he was happy. He had great teachers and therapists. So his dad and I started to focus on what Richard could do instead of what he couldn’t. And one of the things Richard loved to do was swim. 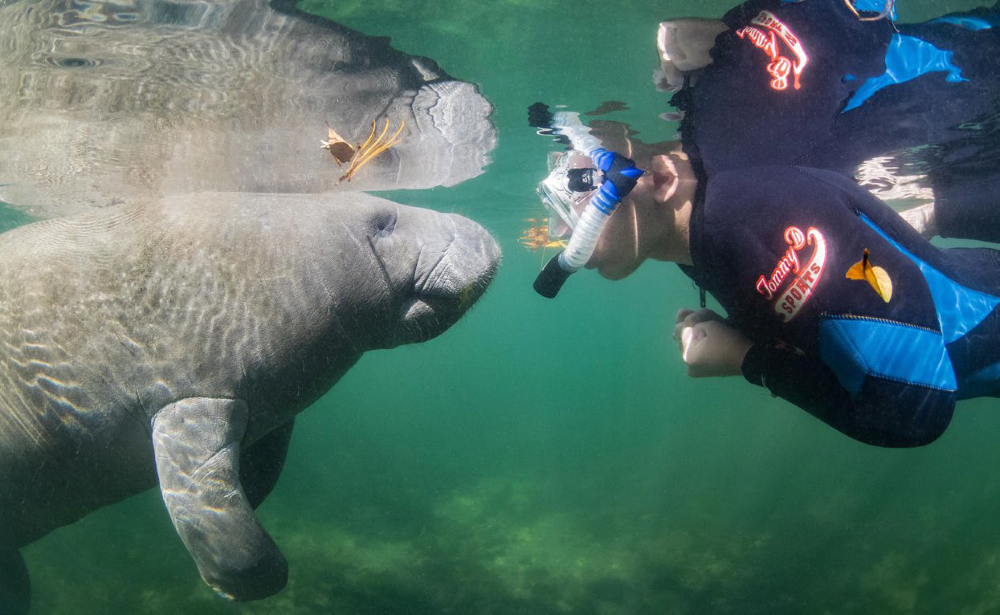 As the years went on, Richard’s love of the water continued. He took lessons to be able to swim properly, and to learn how to be safe in and around the water. He loved to read about animals that live in the water, and had a growing collection of plush fish, sharks, manatees, and dolphins. Sean and I divorced when Richard was 12, but Sean continued to take Richard to the swimming pool several times a week and he encouraged Richard’s love of marine animals. I later married my husband Scott, who is a scuba diver. I became a diver, and Scott and I often wished it were possible for Richard to come diving with us. But we didn’t think that would be a possibility due to Richard having autism. We knew that he was capable of snorkeling though, so during their trips to the pool Sean taught Richard how to use a mask and snorkel. In no time, Richard was snorkeling all around the pool, enjoying being able to see underwater.
Still, I hoped for Richard to experience scuba diving, even if it was just in the swimming pool. The owner of our local dive shop took a chance and allowed Richard to take a Discover Scuba Diving class. Within an hour of first breathing through a regulator, Richard was swimming all over the deep end of the pool in full scuba gear, completely relaxed and happy. He was in his element.
At this time, we met scuba instructor Pete Davis, who had also recently become an adaptive diving instructor through the Handicapped Scuba Association (HSA). Pete explained that it just might be possible for Richard to become an Open Water diver with a certification through HSA. Richard would have to demonstrate basic scuba skills (mask clearing, regulator retrieval and purge, inflating/deflating BCD, etc.), and be able to react appropriately in the event of an emergency. He would also need to dive with two other certified scuba divers at all times. Sean, Scott, and I discussed it, and we came to a unanimous decision – we would all help Richard become a scuba diver.
Richard was a model scuba student and was very eager to learn. Like many people with autism, Richard is very visual; he learns best by seeing something rather than being told about it. He quickly caught on to how to perform his scuba skills by watching Pete, and also easily adapted to using hand signals. Richard has trouble with verbal communication, and finds it difficult to speak in full sentences. This was not a hindrance to him in the water though, where none of us use verbal communication. With Pete, Scott, and I in the water with Richard, and Sean cheering him on from the side of the pool (and later the quarry when Richard did his Open Water checkout dives), Richard mastered his skills and was able to graduate to become an Open Water scuba diver.

On the left Tanya Houppermans and her son Richard waiting for whale sharks in the waters off of Isla Mujeres, Mexico
On the right Richard honing his scuba skills in the Rappahannock Quarry in Fredericksburg, Virginia

Before taking Richard to dive in the ocean, Scott and I took him diving a few more times in our local quarry. At that point, I couldn’t wait to introduce him to my beloved sharks, so I took Richard to the North Carolina Aquarium at Roanoke Island where they allowed Richard to dive with the sand tiger, sandbar, and nurse sharks. Richard loved being in the water with sharks that he had only previously read about in books. By now, we felt that Richard was experienced enough to make his first ocean dives, so Scott and I took him diving at Bonaire’s beautiful coral reefs. Richard performed flawlessly, and was most excited about seeing a sea turtle and a spotted eagle ray. He would even verbalize what he was seeing! After a dive, I would ask him, “What did you see?” He would reply with, “I saw a sea turtle!” or “I saw a ray!” Hearing him express himself so effortlessly was tremendously rewarding.
After our trip to Bonaire I decided to concentrate seriously on underwater photography. I realized that photography was one of the most powerful tools I had to not only help with shark conservation efforts, but to also share my son’s story. Perhaps we could help others by showing the opportunities available to those who may have never thought it was possible to become a scuba diver. So I invested in my underwater photography kit, and began developing my skills as a photographer.
While vacationing in Florida a few months later, we took Richard to snorkel with manatees. Richard was taught early on not to touch the animals, and to also not do anything that might scare them. Because Richard was so unintimidating, the manatees came right up to him, with one even gently nudging Richard on the nose. Richard was exuberant about being “kissed” by a manatee. The image I took of the manatee approaching Richard shows what can happen when we interact with animals on their terms. It was truly a magical moment, and Richard had a smile on his face for the rest of the day.
Our biggest adventure yet came last July when Scott, Richard, and I traveled to Isla Mujeres, Mexico to snorkel with whale sharks. When our boat arrived to the site, Scott and Richard slid into the water together. Although Richard is quite competent in the water, Scott and I always make sure at least one of us is within arm’s reach. I followed with my camera, and a few minutes later the first whale shark swam by. Richard was thrilled to see a whale shark so close, and after the shark swam by, Richard poked his head out of the water and said, “I saw a whale shark!” He had no fear, and excitedly put his face back in the water to look for more whale sharks.
The next day, we went back out to the site and were privileged to see not only whale sharks, but also several manta rays! Again, Richard readily got into the water and watched as three manta rays swam by. When he lifted his head out of the water, he said, “I saw three manta rays!” Not only was he snorkeling in the open ocean with large animals, but he was also using sentences to tell me what he was experiencing. I was incredibly proud of what Richard was accomplishing.
One the third day of our trip, high winds prevented us from going back out to see the whale sharks, so we took Richard diving in one Mexico’s beautiful caverns. I ensured that this was a suitable environment for him, with shallow depths and plenty of areas with access to the surface. After a couple days of snorkeling, Richard was eager to scuba dive again. With Scott close by, Richard used his flashlight to follow our guide through the caverns, while looking around at the incredible formations. When we surfaced from the dive, I told Richard what a great job he did. He didn’t say anything, but he didn’t need to. He had a grin from ear to ear, and that said it all.

Whale shark (on the left) and manta ray (on the right) in Isla Mujeres, Mexico. 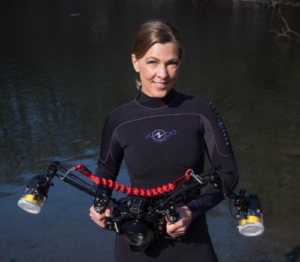 Sharing diving adventures with my son, and recording them with my camera, are some of the most fulfilling moments of my life. They would never have happened without the support of everyone involved in helping Richard become a diver. This was truly a team effort, from Sean first teaching Richard how to snorkel, to the wonderful staff of The Scuba Shack willing to take the time to teach Richard to dive, and Scott ensuring Richard’s safety every time we are in the water. Being a diver has been tremendously rewarding for Richard, and has opened up a world of opportunities for him. My hope is that when people see the images of Richard diving, they will realize that those with disabilities are capable of doing incredible things with the love and support of those around them.