Lights, Camera, Action! The importance of light in underwater photography

Of course there is no substitute for adequate working knowledge of the camera system, and a good eye for composition is a bonus, but the key factor in creating dynamic, creative and impactful underwater images is understanding the light.
Learning and understanding how light falls on the subject and having the ability to control and shape the light is crucial!
The lighting is what creates the mood and atmosphere of any image. 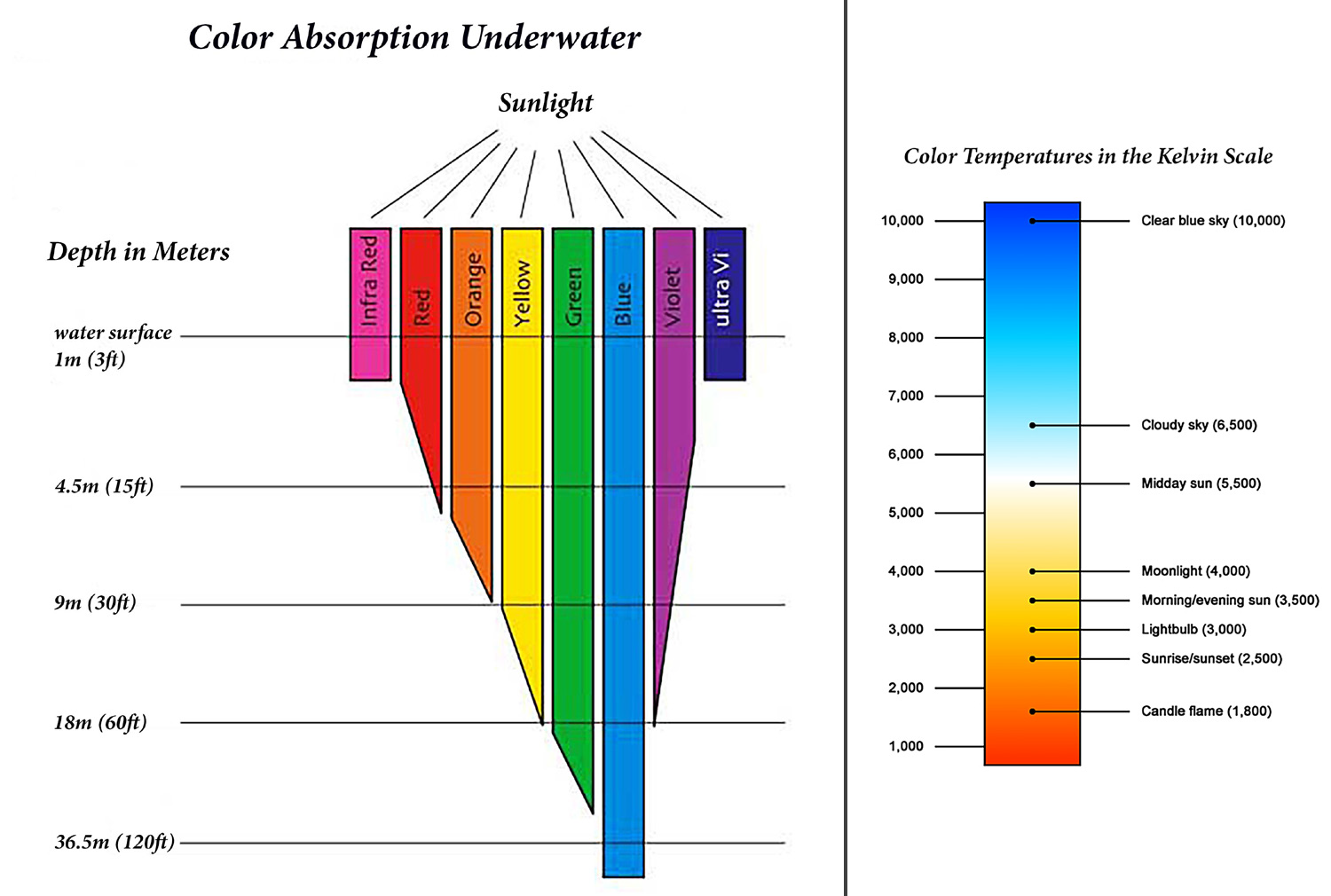 The harshness and softness of the light plays a key role in the shape, appearance, dimension and texture of an image. It is important to know when to add light and when to subtract it.
Direct light will cast harsh shadows while diffused light will create a much softer look. Shadows will be cast on the opposite side of the light source.
A small light source produces hard, directional light with a narrow beam, while a large light source will produce a softer light with a wider beam.
The direction and angle of light will dictate its quality.
Light coming from an angle will produce texture, drama and creates character. Direct light coming from the standard flash camera position will usually be flat and unflattering, revealing minimal shape and texture. Angling the light sources will produce more interesting results.
The color temperature is a characteristic of visible light and refers to the warmth or coolness of an image and affects its mood and feel. A warmer image will have more yellow and red tones while a cooler image leans towards the blue spectrum.
Color temperature is measured using the Kelvin scale, a higher number
reflects a cooler temperature and a lower number reflects a warmer tone.
The white balance setting on the camera, photo editing software and filters will give the shooter control over the color temperature.
Water is denser than air resulting in the loss of visible colors very quickly.
Red is the first color to be absorbed and is no longer seen at 5m (15ft), orange, yellow, green and blue are the next colors to be absorbed. Due to the absorption of light, artificial lighting is needed or images will lack color and contrast.

This technique can be very effective in producing high quality images, especially when using a single strobe. Positioning the strobe to the left or right side of the camera creates shadows, giving the image depth, and accentuating textures.
Back lighting

Place the light source behind the main subject, visualizing how the light is falling upon it. What is the desired outcome? Use of a constant light source often works well in this situation and can provide instant feedback. Double check the exposure of each image, as overexposure presents a problem when too much light spills out from around the subject. Camera angle, distance and height of the subject in relation to the camera, and distance from the subject to the light source are other variables that need to be taken into consideration.

The basic set-up for wide angle underwater photography is to extend both strobes arms bilaterally. Angle each strobe slightly outwards, away from the center of the camera. This will help to minimize backscatter. Extending the strobe arms to their maximum length will most likely be required for a reef or wreck scene, but a smaller subject will require the strobes to be drawn in closer to the camera. Use diffusers when shooting wide-angle scenes, they will allow for increased coverage and soften shadows. Keep in mind that diffusers will decrease the amount of light and contrast in an image, adjust the camera settings accordingly. Position the strobes slightly behind the housing to avoid unwanted light spilling into the image.
Macro lighting

Aiming the light source directly at the subject underwater can be a problem. The light hits particles in the water and is reflected back on to the camera sensor, creating unwanted backscatter. However, this does necessarily apply when shooting macro subjects because of the close proximity of camera to subject. Reducing the amount of water between the camera lens and subject significantly reducing the chance of recording backscatter. A basic strobe position for a macro lighting it to draw the strobes in very close to the camera and direct the light towards the subject.

Super macro photography involves adding a device that adds magnification such as a diopter, tele converter, extension tube. In theory, most strobe positions and lighting techniques can be modified is some form and applied to super macro subjects. To be effective, the strobes should be drawn in close to the camera. Due to the higher magnification, the power output of the light source will need to be reduced to avoid over-exposing the image.
Cross lighting

A method by which both strobes are pointed inward towards the subject. This lighting technique creates a lovely quality of light and gives the image nice balance. Increasing the shutter speed will create a black background, produce vivid colors and provide depth.
Front and side lighting

Position one strobe over the lens port at a 45 degree angle facing the subject and place the other strobe to the left or right side of the camera depending on the desired effect. Position the strobes so the edge of the cone of light gently hits the subject. This technique gives the image a 3-dimensional look.
Diagonal lighting

Diagonal lighting will illuminate the subject nicely providing texture, color and dimension. To achieve this effect, place one strobe top right and the other back left or vice versa. The height and angle of the light depends on the subject and desired effect. Experiment with various strobe power ratios, set the strobes manually and take control of the lighting situation.
Inward lighting

If the subject is hidden in a crack or crevice pull the strobes in very tight and aim them towards the camera lens. This helps to eliminate unwanted shadows. This technique is most effective when shooting super-macro subjects because of the increased magnification and short working distance from lens to subject.
Snooting

Snoots have become very popular in recent years. A snoot is a device placed on a light source used to direct light onto a specific portion a subject. This creates a spotlight effect, highlighting the subject and blocking out distracting backgrounds. Snoot lighting grabs the views attention, produces vivid colors and creates a wow-factor. Learning to use a snoot requires patience and perseverance. Trial and error is part of the process, but when success strikes, and that stunning image is captured, it is very rewarding.
Off – Camera lighting
Using this technique requires thought and preparation. Whether the off-camera light source is placed on a wide-angle wreck or behind a translucent leaf fish, the images will be creative, dynamic and eye-popping. The strobe will be detached from the housing and hand-held or placed on a tripod. Several triggering mechanisms can be used to trigger the off-camera strobe. Using an extended sync cord is a good way to begin experimenting with this technique. For more creativity and flexibility investigate fiber optic triggering systems.

Get creative with multiple light sources

It is the angle of light that ultimately determines the quality of light. Using more than one strobe opens the door for an endless array of lighting possibilities. Experiment with unfamiliar lighting techniques and apply changes to favorite tried and true methods. Visualize how the light will fall on the subject before pressing the shutter, attempt to “see” the image before it is captured. In the words of Ansel Adams, “The concept of the photograph precedes the operation of the camera. The print itself is somewhat of an interpretation, a performance of the photographic idea.” Be creative, explore and observe.

WORDS and PICTURES by Beth Watson