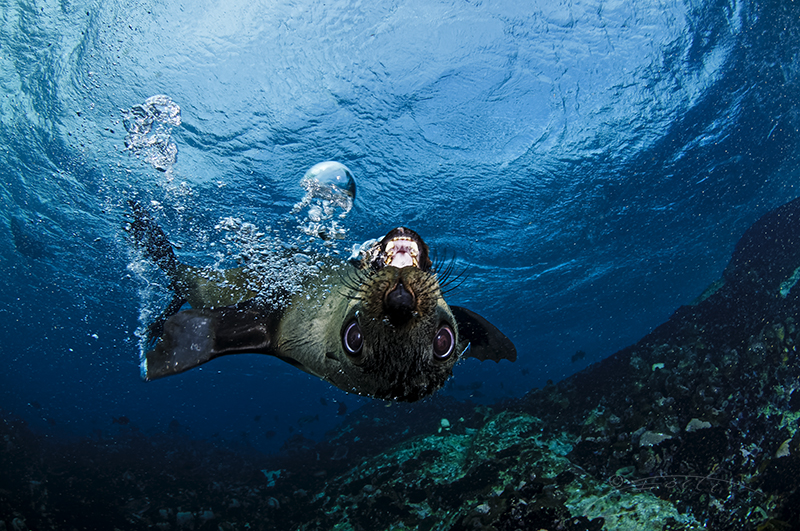 Water is still dripping from my partly undressed wetsuit. With my towel comfortably wrapped around my shoulders I can feel the heat of the African sun warming me up nicely. It’s a stunningly beautiful winter’s day in Cape Town and although there is a crispness to the air, I feel in no rush to leave. As my mind reflects back on the wonders spotted during my two dives, my eyes wander across the almost mirror flat bay to feast on the beauty of the majestic Hottentot Holland mountain range along the Eastern shore of False Bay. The soft shadows of the afternoon sun render the topography of the mountains beautifully. It won’t be long now before the sky starts to turn a gradient of light blue and light pink as the sun dips lower to meet the Atlantic Ocean at sunset. As countless times before, I am firmly in the mesmerizing grip of this beautiful bay and it is easy to see why it’s considered to be one of the great bays on Earth. Indeed, there is no rush to leave its shoreline and head-on home.

Discovered in 1488 by Bartolomeu Dias, the bay was first named “the gulf between the mountains” On either side of the opening to the bay iconic mountainous landmarks are found. Cape Hangklip on the Eastern end and Cape Point on the Western end. It’s these two landmarks which have gave birth to the current name of the bay. In later years, after Bartolomeu’s discovery, sailors returning to Europe from the East confused Cape Hangklip for Cape Point. A mistake not too difficult to make from the ocean. These sailors wrongfully sailed into the bay, thinking they were entering Table Bay. For this reason, early Portugese seafarers named Hangklip, Cabo Falso. From there the name, False Bay. 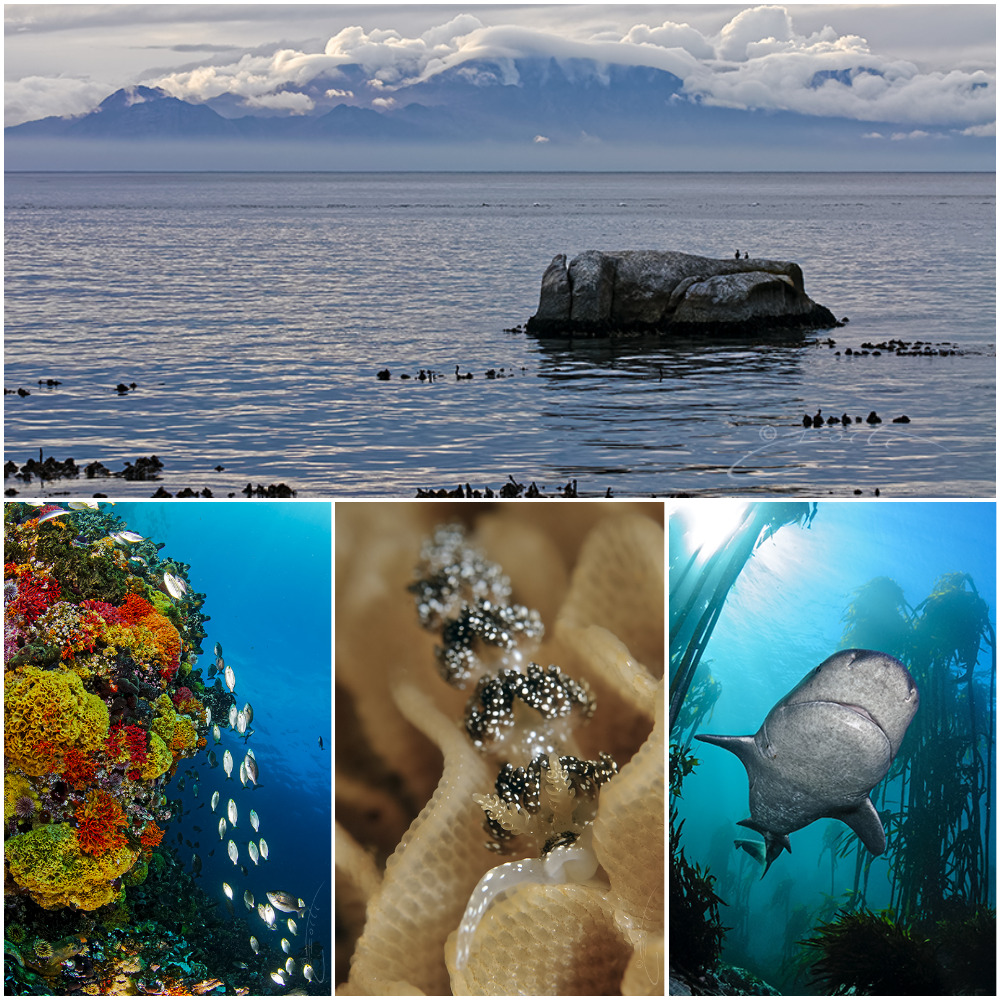 These days the number is steadily climbing, but in the past it’s only been a relatively small number of people who got to explore and witness the beauty hidden below the wide expanse of water filling the bay. Winter is the best season to explore the many dive sites along the Western shore of the Bay. It’s a blissful high descending onto one of these colourful reefs, teeming with all sorts of marine creatures, while sun rays dance all around you. The rich and diverse marine life of False Bay makes it easy to understand why it was selected to be one of the six Hope Spots in South Africa. Whales, Orcas, various shark and ray species, Dolphins, Cape fur seals, Jackass penguins, an extensive list of reef fishes of which a fair number are endemic, octopi and a few jellyfish species all call False Bay home, or visit it seasonally.

Once you slow down, as I often love to do, and start to admire the macro life the critter list grows exponentially. Nudibranch have captured the fascination of many people, and False Bay has some beautiful nudibranch. Training the eye to spot one of these magnificent creatures, among the densely covered reefs, takes a while, but also means that one gets to see and learn about so many other small critters which you would have missed if you were to just swim along.

Not only are there these beautiful reefs to be found in False Bay, there are also kelp forests which hold a mysterious beauty of their own. Imagine being able to fly through a forest, which is exactly the freedom you feel when you dive in the kelp forests. Where you fancy, you can go, gliding along the forest canopy or diving down to the forest floor, where the play of light and shadow constantly changes your visual environment. A particular highlight local divers have been enjoying in the kelp forest over the years has been the ability to regularly dive with one of the oldest shark species alive today, namely the Seven gill cow sharks. These prehistoric looking sharks perfectly contribute to the majestic nature of the forests as they quietly appear out of nowhere, staring straight into your eyes as they glide past inches away from you, only to disappear as mysteriously as they arrived. 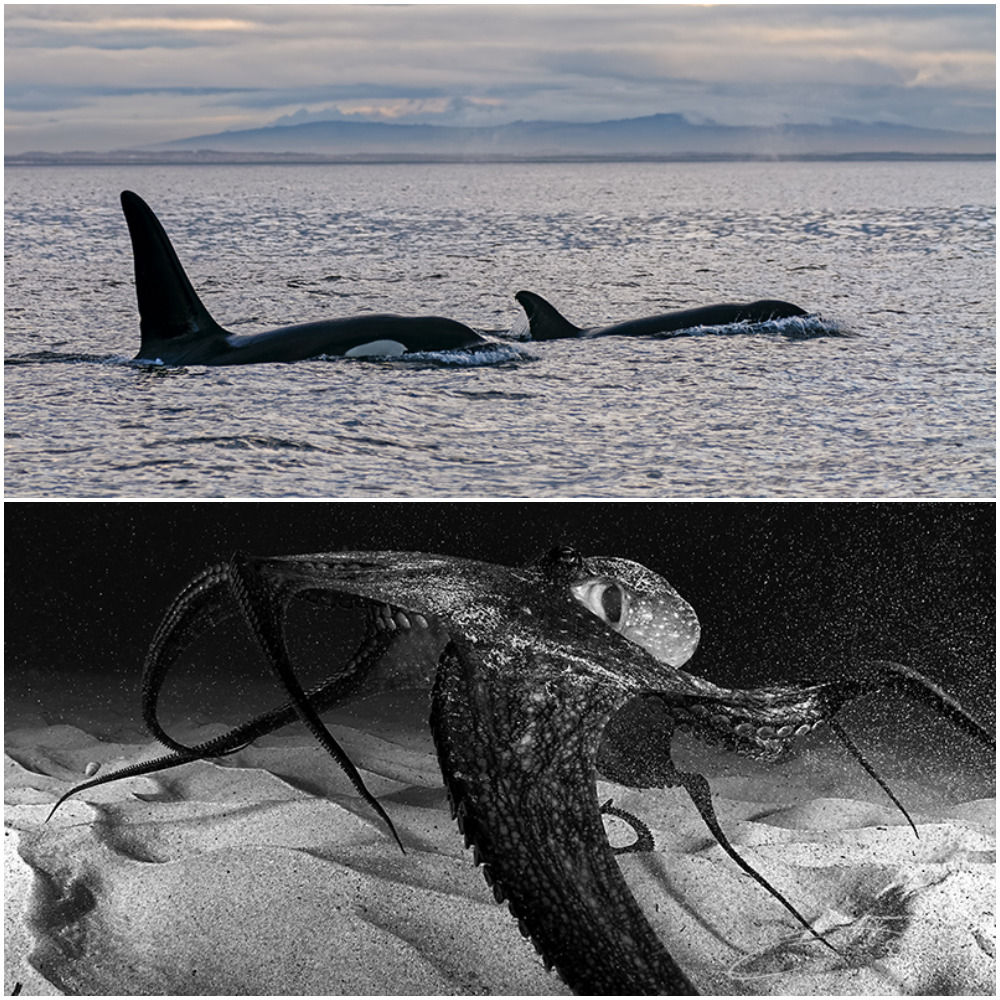 In a world where the ocean is generally considered an unlimited source of food, it should sadly come as no surprise that a bay with such diverse, and abundant, marine life would draw the attention of those seeking to take rather than appreciate. Yes, this beloved bay of mine is a Hope Spot and rightfully so, but it could do with more help to see it flourish. Certain areas in the bay are Marine Protected Areas (MPAs). Sadly, although these are no take zones both commercial and recreational fishing operators still fish within these areas. I would love to see that the MPAs not only be proactively patrolled but also that they would be increased in size. It’s heart breaking to see for example a company being given the right to fish octopi within an MPA area. Not only is it questionable that the sheer number of octopi traps granted are sustainable, but each year has seen an increase in the number of whales getting entangled in the ropes linking the traps and the buoys on the surface.

I would also like to see that the water quality in the bay be addressed in earnest. Although I know that the pumping of sewerage, and other pollutants into the ocean, is not unique to False Bay, it should, by no means, allow for the authorities to turn a blind eye. The body of evidence that shows how important a healthy ocean is to our existence and survival on Earth is extensive. It can’t be ignored, yet so often it is. It’s up to us, those who love the ocean and who already understand its importance to keep on spreading the message of hope. To grow the support base through our positive actions, caring for and sharing the wonders of the ocean. False Bay is not only my Hope Spot, it’s the place which gives me hope.