Papua New Guinea The island in the clouds 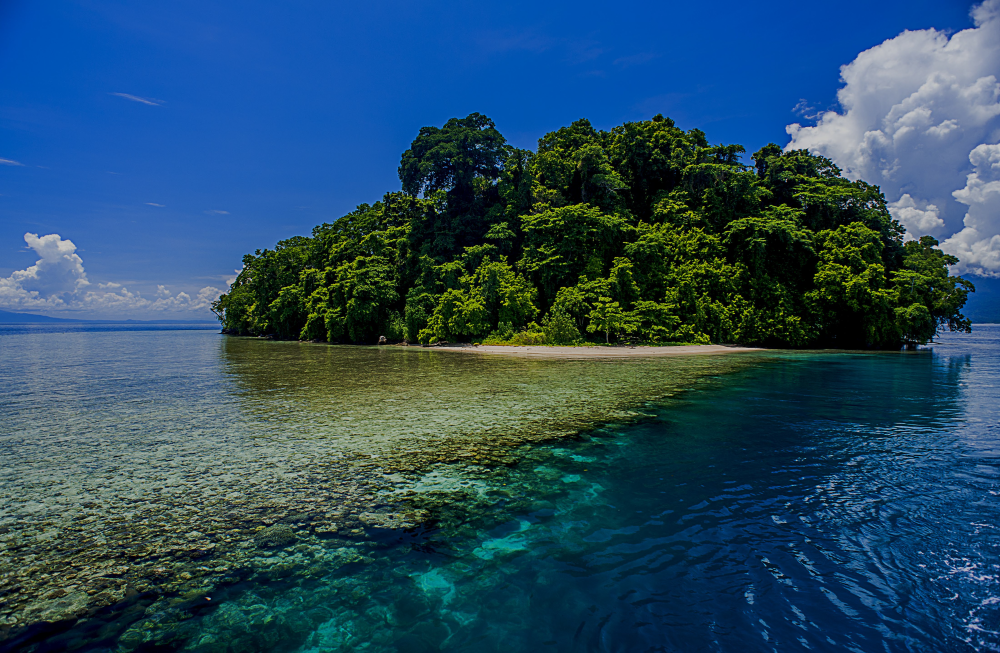 Papua New Guinea is located between Indonesia and Australia, on the equator. A land covered for three quarters by rainforest and mountains over 4,000 meters. They called it “the island in the clouds”, because at dawn and dusk, in the Highlands, between clouds and mists only sprout tops of mountains covered in jungle.

A jungle hiding a primitive world, a paradise of nature populated by countless species of birds, butterflies and flowers that make the environment of the big island unique, and where cannibalism is probably still practiced and the law of retaliation applied regularly.

Those traveling in Papua New Guinea plunges into a completely different reality from the everyday. Definitely, it will be paid off every uneasiness: what places in the world can offer together a wild and unspoiled nature, dream coral islands, a primitive village life, the colors and the sounds of the sing-sing and an incredible variety of handicrafts. Here are 769 different ethnic groups, speaking as many 769 dialects.

It is a country in the balance between prehistory and third millennium, with Aborigines dressed in grass skirts, noses pierced by animal bones, painted faces, and the inhabitants of the capital Port Moresby, the front door of modernity, now accustomed to using any electronic products.

Nevertheless, it is to diving enthusiasts that Papua New Guinea sets aside unforgettable surprises, thanks to the beauty and variety of its incomparably beautiful seabed. Into its waters we can make some of the most spectacular diving in the world on extremely different backdrops, which alternate offshore pinnacles to walls covered in soft corals and sea fans, air and naval wrecks of World War II to channels where the large pelagic fishes reign uncontested and finally, being located in the heart of the Indus Pacific Ocean, an incredible biodiversity that makes the joy of macro photography enthusiasts. To realize this reportage, we visited the major areas of underwater naturalistic interest: the Kimbe Bay and the Sea of Bismark, Kavieng, and finally the Milne Bay. 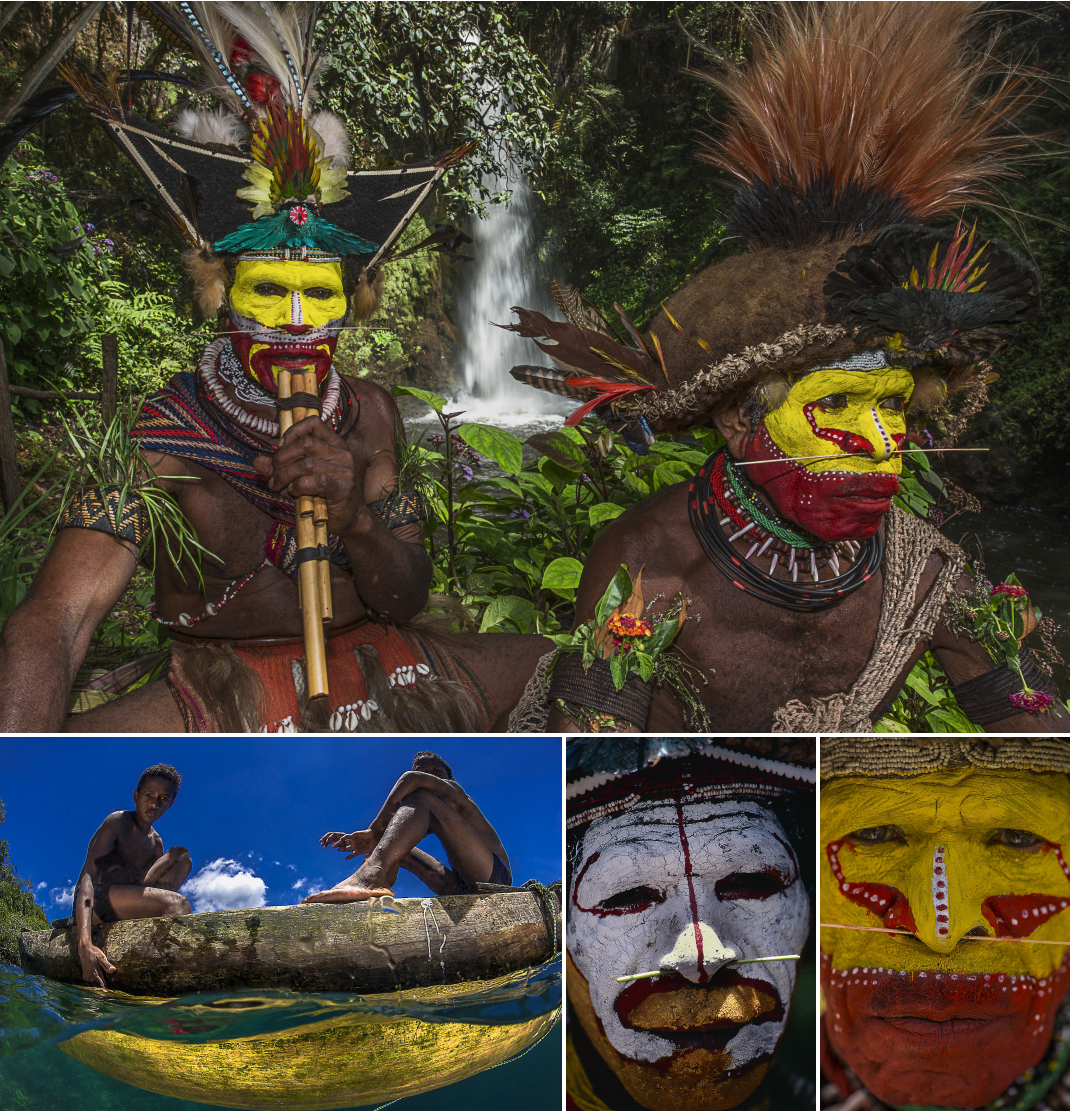 THE KIMBE BAY AND THE SEA OF BISMARK

The reefs around Walindi, in the Bismarck Sea, is extraordinarily rich. Over 400 species of coral and 900 species of fish have been classified in these waters.

Much more than half the world’s species. The meetings with trevally and barracuda, tuna and kingfish, eagle rays and turtles are routine. All framed by huge sea fans, giant sponges, soft corals of every color and crinoids, among which you can indulge in search of the inhabitants the most hidden: frogfish, leaf scorpion fish, and ghost pipefish. The water is generally clear and the current is never strong. Ideal conditions for underwater video and photography enthusiasts.

There are several dive sites particularly suited to the ambient photography:

South Emma, with its natural arches on which grow splendid sea fans covered with multi-colored crinoids and where, at a depth of about 38 meters, opens an impressive through-cave covered with colorful soft corals and sea fans.

And also Vanessa Reef, characterized by its huge elephant ear sponges. English Shoal, kingdom of pelagic such as jacks, barracuda and sharks circling the shoal.
Nevertheless, definitely there’s not a lack of places where lovers of macro photography can indulge themselves in search of the subjects most rare and difficult to capture. Along the reefs of Rest Orf Island, also ideal clown fish, shrimps, gobies sprouting from the sand with small crustaceans and rare ghost-fish. To the south of the island, there’s Donna’s Reef, also a place for macro photography enthusiasts and of biological interest.

Father’s Reefs, reachable only by cruise, represent a paradise for wide-angle photos. Is a group of more reefs in the open sea to the north – east of Kimbe, along the northern coast of New Britain. Being located far off from the coast, these reefs attract many species of pelagic fish such as sharks, tuna, barracuda and jack fish shoals.

The Arch is probably one of the most famous dives in the area. A natural arch, a little less than 30 meters deep, covered with soft coral and sea fans. Jayne’s Gully is instead a channel located between two reefs, where gray reef sharks and silver tips sharks make the show, whizzing among soft corals. 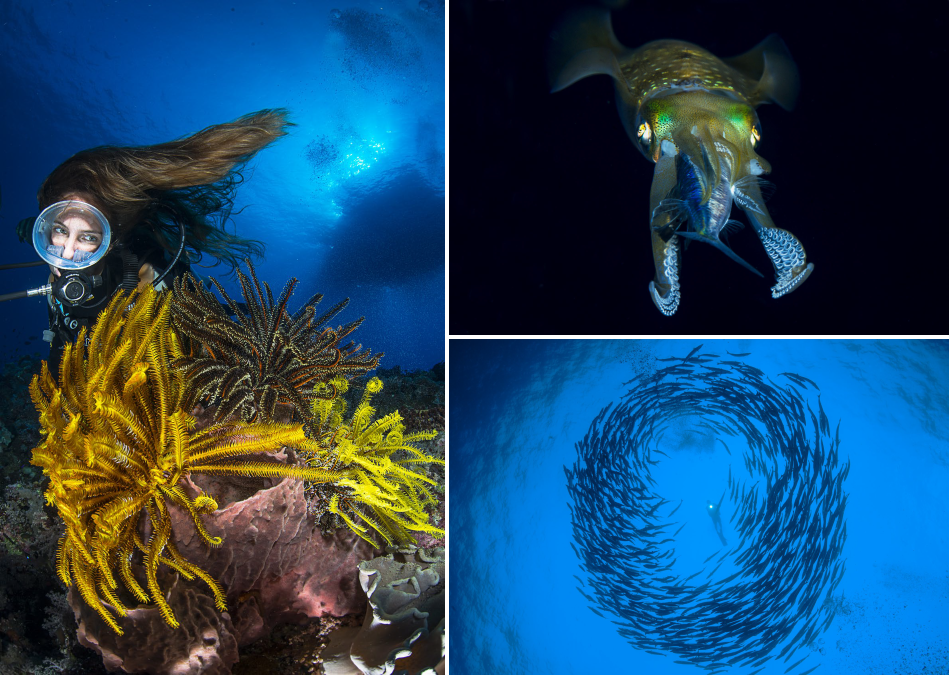 The dives in Kavieng, a locality in New Ireland, a narrow and mountainous island that closes to the northeast the Bismarck Sea, are slightly different and more challenging. Some dives are performed on offshore shoals, others into channels.
The current is often impetuous and consequently all the Kavieng area is the undisputed realm of large predators: jackfish, barracuda, gray and silver tip sharks, and groups of eagle rays that allow you to get closer and take pictures with relative ease. Moreover, in these waters you can also effect interesting wrecks dives, some of which date back to World War II. Among the most interesting ones, to siglying on the right side at 30 meters deep. Around the wreck, approximately 40 m long, often swim shoals of barracuda and batfish and the seabed, although mostly sandy, is rich in sea fans and coral formations. Another highlight is the wreckage of a Mitshubishi “Jake”. This Japanese aircraft of World War II is located on a sandy bottom at only 10 meters deep. The incredible beauty of Planet Channel seabed is truly unique: the western part of this channel is called Eagle Ray Passage, for the presence on schools of eagle rays during periods of strong currents. Black coral and sea fans cover the main channel, which is the habitat of jacks, barracuda and sharks. Albatros Channel, instead, is a narrow strait between two islands where you can find pelagic and reef fish and also, depending on the current, eagle rays, manta rays, tuna, barracuda and reef sharks. However, in this dive we will not find only large fish. Indeed, among large sea fans, black corals and sponges, are hiding small nudibranchs and pygmy seahorses.

The Milne Bay is located at the extreme southeastern tip of Papua, where the waters of three seas rich of life mix: the Bismarck Sea to the north, the Solomon Sea and the Coral Sea to the south. Consequently, around the many islands forming the Milne Bay, you can make beautiful dives between huge sea fans, soft corals, sponges and many fish species. The characteristic of dives in this area consists of the Muck Dives: literally, dives in the muck. Among these, the most spectacular is definitely that of Lauadi, an inlet on the coast where the forest comes down from the steep mountains and reaches the black beach. From the muddy bottom in front of the beach, only 10 meters deep, flows out an unbelievable multitude of nudibranchs, small crustaceans fish, including the Mandarin fish. Just a few minutes by dinghy from the beach, you can make another dive with completely different characteristics: large sea fans only 10 meters deep, where the sunlight filtering through the trees of the jungle in front create surreal effects. Not to be missed, and of major effect, is also the dive at Giants at Home, which is a permanent cleaning station of the giant manta rays arriving in groups of 4 or 5 specimen at a time and alternating for several minutes near a big submerged rock, a few meters deep on a sandy bottom.

Discovered in ’98, this dive site has quickly become a regular destination of the world’s most important television crews for making documentaries on the species. A real “Must” for manta rays’ lovers. One of the most unforgettable dives remains that of “Black Jack” wreck, a bomber of World War II that is definitely one of the most beautiful and well-preserved aircraft wrecks existing in the world. The plane was on a mission when, because of a failure during a storm, was forced to effect a sea landing in front of the village of Boga Boga. The two pilots and the rest of the crew survived, while the aircraft sank on a sandy bottom at about 50 meters. The dive is pretty easy: you go down along a rope fastened to the wall, to which are hung the Nitrox cylinders for decompression stops. The plane, a four-engine, remained completely intact. There is nearly everything: engines, the original equipment, the head and tail machine guns and the pilot’s seat with the joystick.

The beating heart of Papua New Guinea remains the land of the Huli, the Tari Valley, in the Highlands. An area rich with stunning waterfalls and breathtaking rainforest scenery. Here, immersed in the jungle, you will encounter the villages of the Huli. An indigenous population, discovered only in 1930, of about one million people who lives in a remote area, away from modern civilization, just as his ancestors lived, in round houses with thatched roofs. It’s friendly people with a strong culture, rich in tradition and with a rather “thin” civilization. They are small in stature, proportionate and very colorful.

They live in family groups divided between men and women. The male children live with their mothers until they’re seven years old, and then move with their fathers. Everybody paint their face with bright colors and decorate the body in a spectacular way.

They use bracelets of plant fibers decorated with bird feathers, and necklaces made of seeds, shells and animal bones. They have a piercing in the nose made with animal bones or bamboo, and wear skirts made of leaves. You can admire them while performing their traditional tribal dances within their villages. The name Wigmen, which means “men with wig”, comes from their custom of wearing very elaborate wigs, which also derive from ancestral traditions. These wigs are a source of great pride for the Huli. It is a nation of fierce warriors. All men have old scars from arrow wounds. They are charming; you have to see to believe. I highly recommend visiting them before the civilization change them out too far.

A trip to Papua New Guinea will result in probable discomfort, high cost of services, significant fatigue due to long hours of flight and large numbers of transfers, but definitely will leave an impression lasting for life.

How to get there

You can reach Papua New Guinea with the convenient flights operated by Singapore Airlines, plying regularly Rome and the main European airports with Singapore. Arrived in Singapore, the trip continues with Air Niugini to reach the capital Port Moresby, which then connects to Alotau or Hoskins airports, or to the live aboard ports of embarkation in Kimbe or Milne Bay.

No vaccinations required. Malaria prophylaxis is recommended only to those who plan to stay in the hinterland. Mosquito spray repellent and long dresses are appropriate precautions.

It is prohibited to export handicrafts previous to 1960 and the birds-of-paradise’s feathers. The use, sale or just possession of drugs is severely punished by law.

9 hours more than in Italy. Become 8 when Italy applies DST.

The climate is hot and humid and temperatures range from 23° to 32° C. The rainy season lasts from December to late March. From April to November it is the driest period, although the showers are quite likely. The best time is during the months of October and November.

WORDS and PICTURES By Sergio Riccardo 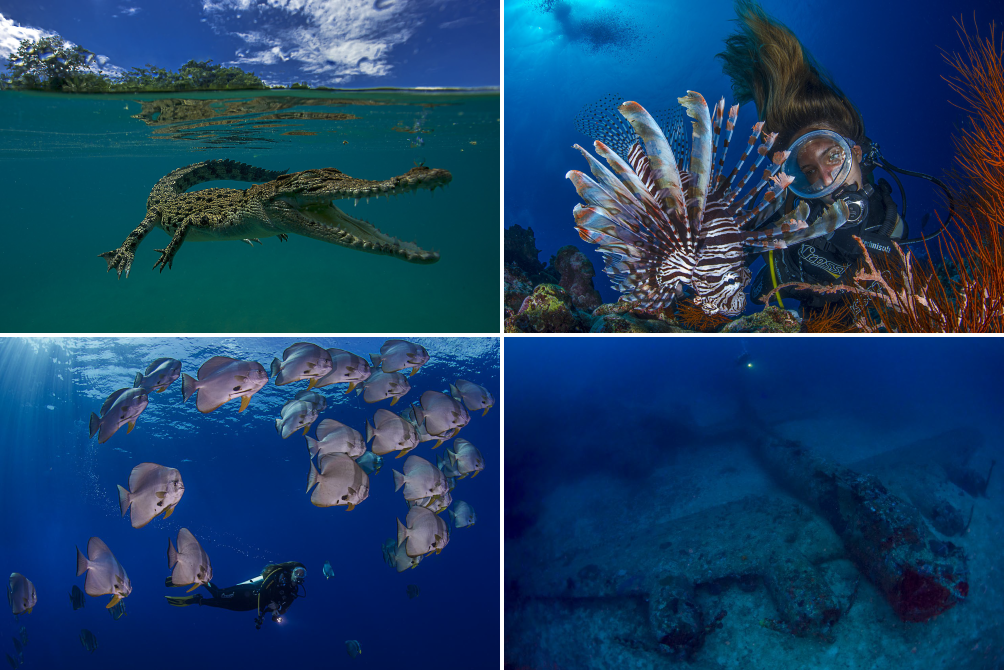