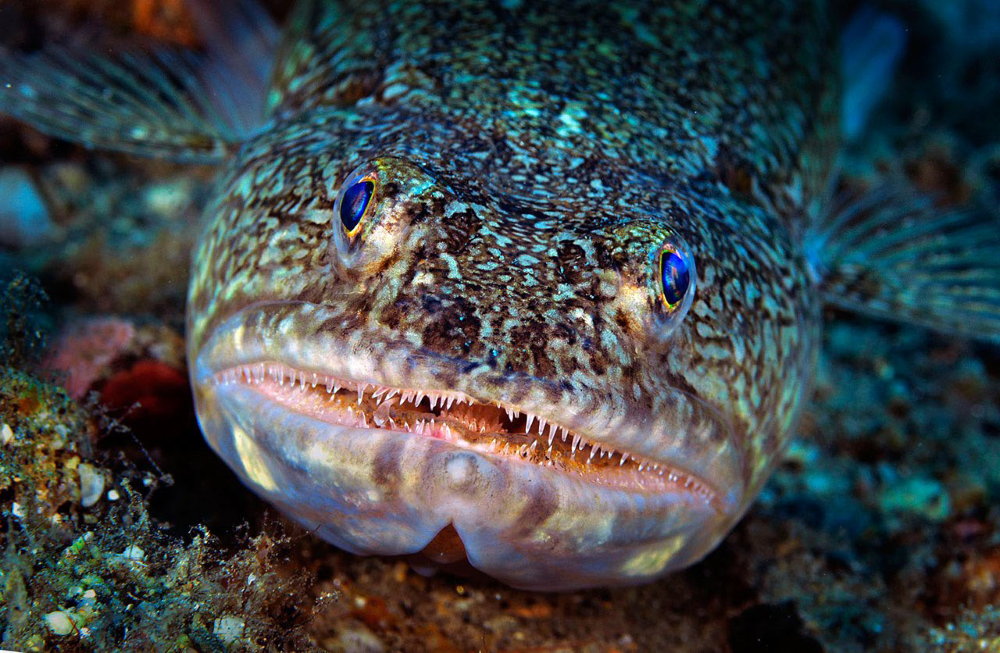 About 75 percent of the coasts of our planet is occupied by the sands.
Resulting from erosion or other volcanic or geological phenomena in general, the debris are transported to the sea by rivers and accumulate so and to varying degrees according to the locality.
In some areas, such as for shoals off the coast, the sediment is made up of fragments of animal origin, such as shells and skeletal remains of animals, which are then finely shredded by numerous agents such as turbulence of currents or waves. Our country is no exception to the rule and, if we consider our coasts from the French border to Trieste, to include all the islands, we can safely say that the predominantly rocky areas are in the minority and in any case, even where the cliff prevails, there is always a large area with movable floor.
It is therefore clear that the majority of areas accessible to the underwater sportsman frequenting the coasts of the Italian seas, and the Mediterranean in general, fall into this environment.
But what do we mean by “movable floor” and which features does the seabed in question present? This term usually refers to all those seabeds with incoherent sediment, composed by granules of different shape and size.
Depending on this, we may have

Such types of bottom include even the Posidonia meadows, plants that right here find the ideal place to grow and that, though declining, still occupy vast areas of our coastline, representing an environment of its own.
One of the main characteristics of the movable floors is given by the fact of being greatly affected, especially near shore, by the waves’ movement. Storm surges cause a total upheaval in the first meters of depth, resulting in continuous morphology changes, sometimes relevant, of vast seabed’s areas.
Another variable which helps to keep continuously moving these changeable environments are the currents. They are the major responsible for the debris accumulation and, depending on their intensity and the depth of the place, they may form piles of sediment perpendicular to the coast, with even several meters of gradient (couloirs and dunes).
The sand, mud and debris bottoms are inhabited mostly by animals that live within the sediment (infauna), but there are many species who spend their existence above (epifauna).
In any case, even the infauna is visible by the diver although over short periods of the day or night. Unlike hard substrates, where we have a high biodiversity, that is many species represented by few individuals, here we see the exact opposite: there are many individuals, belonging however to a few species.
Under such premises one would think of having to deal with a kind of desert, but it’s actually the exact opposite.
The soft bottoms are generally snubbed by the majority of divers just for their ostensible desolate appearance, but, with a little attention, and especially at night, we will find ourselves in the presence of extraordinary creatures. 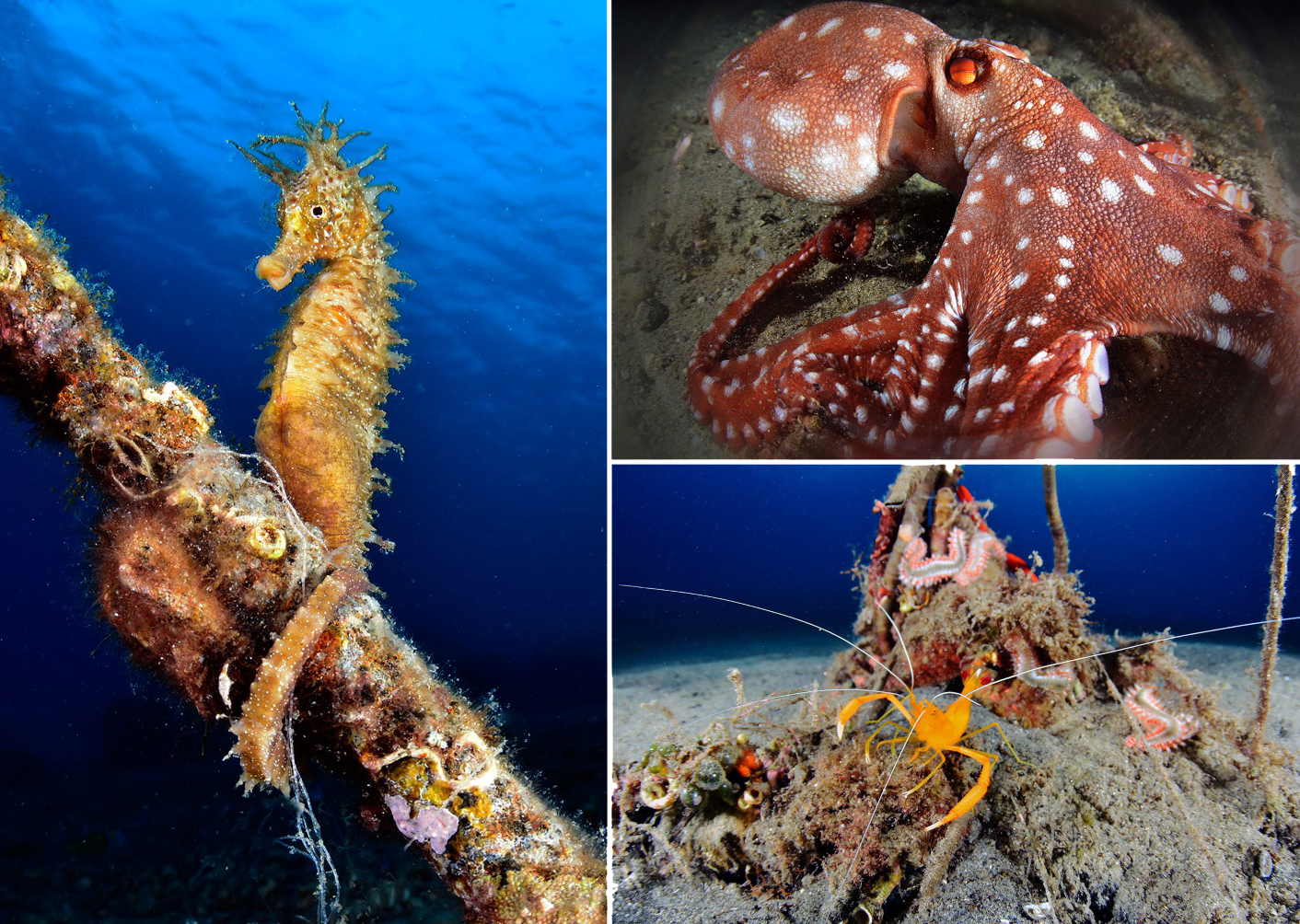 The sands are in fact inhabited by many organisms.
The most typical are some polychaete annelids, some wandering, more sedentary, the latter living inside their sunken tube into the sediment.
The lack of a hard support does not discourage some coelenterates, the group certainly better represented on rocky bottoms, but also here with many species: just remember the ceriantharias or Actiniaria, all anthozoans who are regularly and thoroughly present on the sandy expanses. Echinoderms are present with species belonging to all five classes in which the group is divided.
The bottom urchins practically live inside the sands, others live on them and gather here for reproduction.
Some starfish can be found exclusively on these seabed while sea cucumbers, feeding on the sediment, where else could be?
The same goes for the ophiuroids, better known as brittle stars, who shun the light by burying themselves under the sand, or the colored crinoids of nocturnal habits.
Among mollusks, bivalves find here an environment suitable to their needs, as many other living species in the sands, and are therefore difficult to detect; much easier to meet are some cephalopods, stable guests such as the musky octopus or the bobtail squid.
Octopuses also fits sediment, of whatever nature, even if they prefer the coarse debris. They build their den by digging a hole on the bottom, and adorn the entrance with stones and conch shells, which serve as “building blocks” for the walls of a secure building.
The cuttlefish, as a good swimmer, hunts regularly on soft bottoms where it, among other things, has the ability to camouflage itself very well.
Several are also the gastropods, large and small, that have adapted wonderfully to the sandy and muddy environments.
Sea slugs among the largest of the Mediterranean can only be seen in these places, especially in spring, when they climb from higher depths where habitually reside, to reproduce.
Crustaceans are also well represented and some have even a strong preference for the gravel or the sand, as in the case of some crabs that exploit the silting to disappear from view. Of course, given the small border between sand and coarse debris bottoms with isolated rocks or cliffs, it is not unusual to meeting here species that are typical of the neighboring environment.
It is the case of some eel-like species, like the moray eel, that is typical of the rocky crevices but very often, especially at night, can be found on soft bottoms constantly looking for some naive octopus for dinner!
Depending on the season, we will also observe species typical of sandy or muddy environments, but usually living at great depths: with the drop in temperatures, winter gives us the excitement of encounters with large monkfishes or beautiful St.Peter’s fishes, who take the chance to go back to more accessible depths for recreational diving.
The inhabitants of the sands have had to adapt to an environment with special characteristics, certainly more hostile than others, especially as regards the possibility of finding a shelter.
The adaptation led to the study of different strategies: some have settled in a very dismissive way, burying themselves up completely or partially to disappear from view; others, such as flatfishes, (e.g. Bothidae, Soleidae or Rajidae), hide in the sand leaving only their eyes and mouth uncovered; others show off a pattern virtually the same color of the background on where they rest, making it very difficult to identify them, betrayed only by eventual imperceptible movements.
The full confidence of these animals in their mimicry makes them virtually motionless in front of the divers and escape is the last option for almost all the inhabitants of the sedimentary expanses of any type: camouflage is the main rule to follow for survival.