Serpula Vermicularis The red flower of the sea

In the following article, in addition to describing the Serpula vermicularis, I would like to send a message to all those underwater photographers who, while admiring a subject, linger about its beauty and its details, leaving out the emotions it can instill up to making them love it and enhance it in all its aspects. 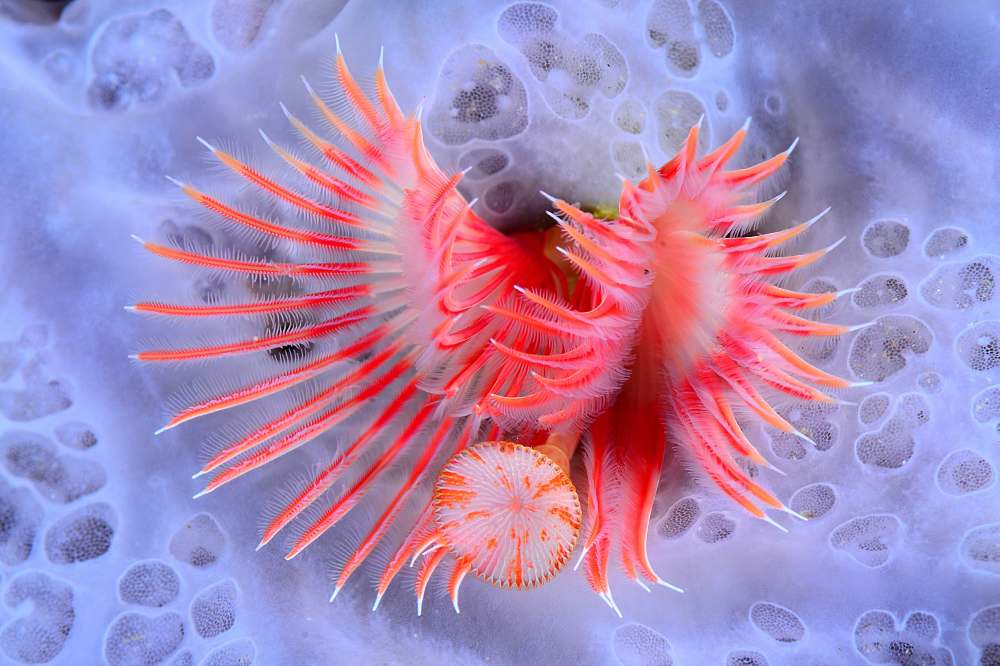 How could we call “worm” this flower of the Sea? It definitely seems a heresy…yet the annelids, the “group” which the Serpula vermicularis belongs, are worms that owe their name to the presence of many small rings all equal to each other along the body, the one attached to another in sequence, a bit as if they were springs! It is difficult to touch or to observe closely a Serpula because to the simple touch it withdraws into its limestone tube, disappearing suddenly. However, approaching a few centimeters away, you can easily observe the presence, in all the Annelida, of chitinous bristles on each segment designed to motion, except for the first and the last that possess tentacles, cirrus or papillae for the other vital functions.

Within this group, there are, subsequently, the Polychaetes (“the animals from the long hair”), often very picturesque organisms for their beaming colors and their fan-like or crowning glory shapes that some of them assume. They can live anywhere: under rocks, in crevices among corals, in abandoned shells, mud, sand, occupying the pipes or the shelters of other animals and so on. It is common, in fact, to observe dozens and dozens of these white encrusted tubes on the surface of any piece of wood collected from the sea. In short, they are the real pioneers of the seabed! 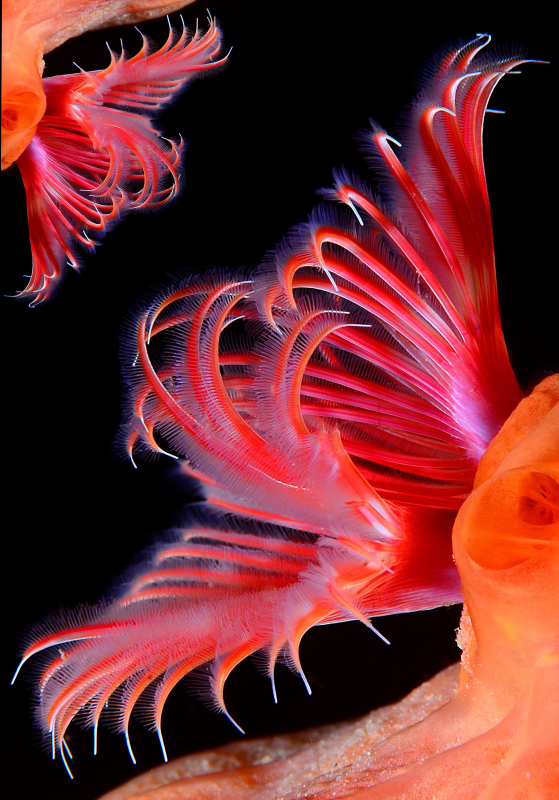 The sea worms are further divided into wandering, free organisms capable of moving on the seabed and sedentary polychaetes, the laziest! Within the latter, we find the Serpula vermicularis, the polychaete most loved and sought by divers for its beauty that recalls either that of a wildflower for its yellow-reddish colors or that of a radiant sun for his majesty. Just think that some Serpula reach a considerable dimensions, comparable to those of one of our hands, with a length of their tube of even 7 cm and a diameter of the branchial aperture of 5 cm.

It is distributed in the Mediterranean and Eastern Atlantic Ocean, up to the North Sea, from a few meters deep up to 1800 meters. The Serpula, however, being sedentary, needs a shelter where to retreat for defense, even when we divers accidentally touch it. Not surprisingly it is a very difficult animal to photograph, because very sensitive to touch. The “hole” in which it lives is a calcareous tube secreted by the body itself, from which the animal everts its crown of tentacles in order to feed. The colorful feathered arms (or radioles) attract the food thanks to the action of many small lashes. Once captured, the food is trapped by the mucus and transported to the mouth through grooves on the tentacles. Think how intelligent they can be: only the minutest particles are eaten, while the coarser are instead accumulated in a kind of bag and used for the enlargement of the limestone tube! At a time when the Serpula retires within its tube, a reddish streaked with white operculum, for purely defensive purposes, closes the opening to the outside! The Serpula is more than a subject to find and photograph. To me is a target, an end point that includes technical, skill and luck, a bit like all victories.

Very often, I dive with the sole purpose of finding and photographing it: I come back several times in the same place and do many attempts with the aim of improving the technique to get more and better pictures. During the various dives, I managed to improve my self-control, critical to achieving the correct state of tranquility; then the approach technique, the type of illumination and the framing. After each photography session, I think I made the “perfect” shot, and then change my mind every time about the “perfection” reached. Through my pictures, I mean not only to document, but I want them to be a tool to express the way I see, feel, and get touched. I want to show what I see, how I see it and how I want it to be. This little animal gives me extraordinary emotions. When the distance between my subject and me is minimal and I prepare to choose and compose the right shot in the camera’s viewfinder, my breath slows almost to a stop and tension mounts for the knowledge I could not afford a misstep, since this shot might be the only one possible. Then my heart, at that precise moment, increases its beat. Nevertheless, I cannot afford to lose that moment. I have to keep calm: I know I must not fail, I cannot fail! I stand still and concentrate, all around is silence. Time loses its dimension to expand in an eternal moment. Only my breath, slow and precise, punctuates its flow. I have to hurry; I cannot stay in front of it for too long, according to the countdown decided by my diving computer. 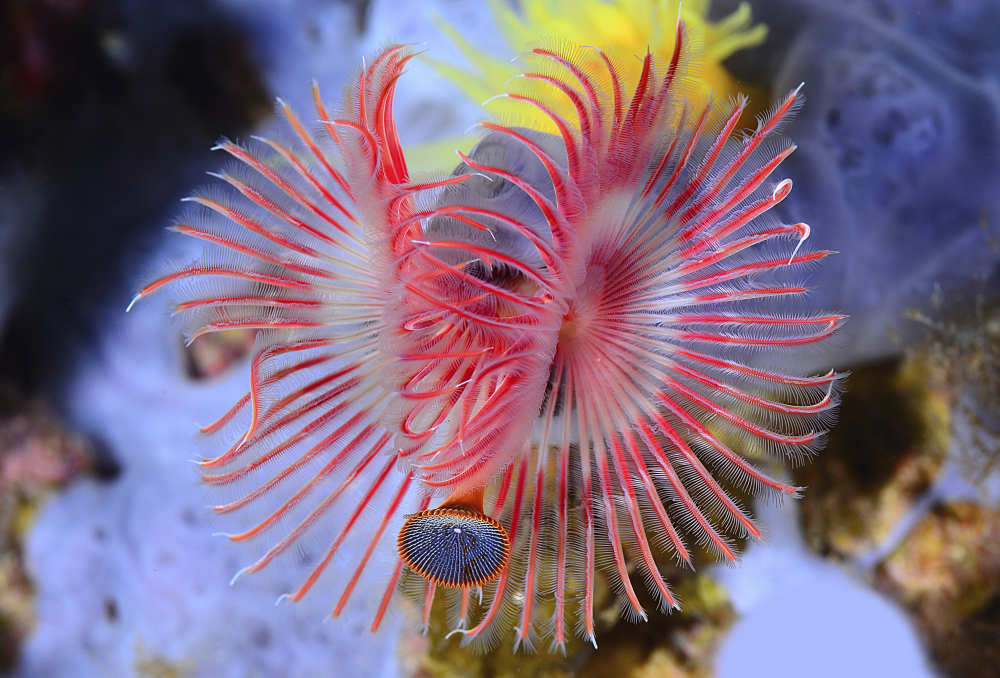 It is important to be very careful, because the Serpula is sensitive to any source of artificial light and to the movement of water masses, even the little ones, such as those caused by moving clumsily. It is also important not to stop any water current with the volume of our body and therefore it is essential to know how to move.

Lighting: to not creating shade situations, pictures that are “flat” and points with bad exposure, it is better to use two flashes. They are useful to cover even the most inaccessible places, especially if the subject is inside eclipsed areas and difficult to illuminate. We exalt the subject trying not to illuminating too much the surrounding environment or, in order to highlight it, we might use a snoot, a tool used to illuminate a particular spot and today almost indispensable for many underwater photographers. We have to find the right compromise between shutter speed and diaphragm aperture, then choose an adequate depth of field: otherwise the radioles, these little hairs that look like tiny lashes, would result missing. It is very useful to prepare, in my opinion before the photo session, a customized picture control: it is a system designed to offer the photographer a very high customization level of the photographs’ aesthetic, already at the time of shooting: to start, we have available a standard already prepared where we can adjust sharpness, contrast, brightness, saturation, hue, etc… color is an important element of personal expression, even if the picture taken should respect a naturalistic result as much as possible.

The naturalistic picture: it is practiced both by professional documentarists and by amateurs. Achieving good results requires great patience and practice: it is important to learn about the natural environment in which we work and the habits of the fish fauna that inhabits it. The precautions aimed to not affect the environment with our presence, the search or the wait for the events and the best moments for the shot, are the key features of this photographic genre. The naturalistic picture is a photographic genre that, by the nature of the subjects concerned and the personality of the nature photographer, expresses a certain professional ethics. Being connected to the disclosure of scientific pictures, it educates and sensitizes about environmental awareness and responsibility in preserving the marine ecosystem.