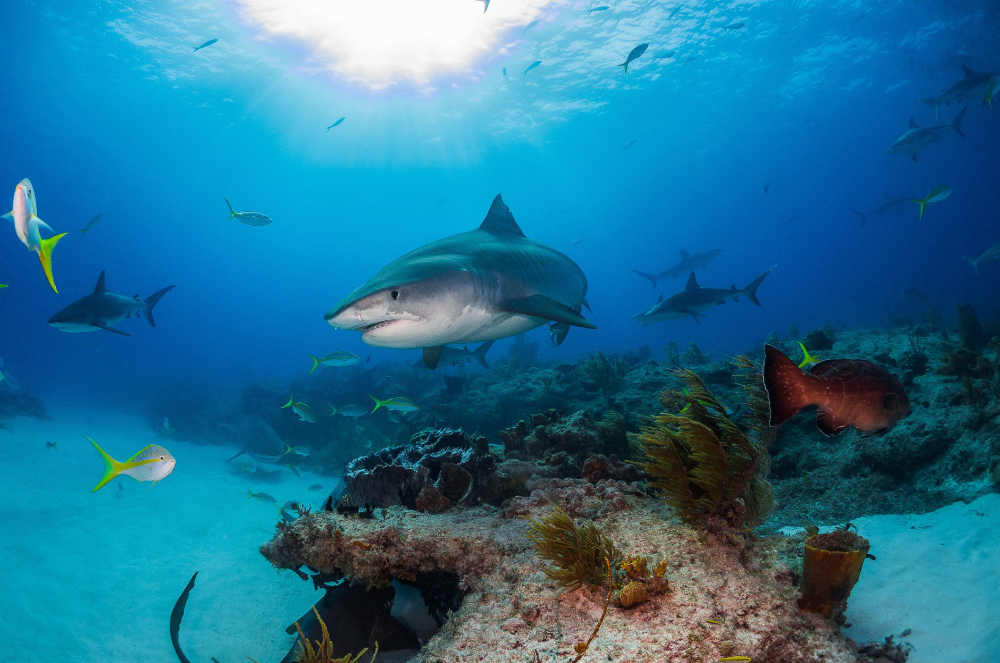 There are few places in the world favored by shark divers as much as the area off of Grand Bahama known as Tiger Beach. And it is easy to see why – close interactions with tiger sharks, lemon sharks, Caribbean reef sharks, and nurse sharks are practically guaranteed; shallow depths allow for hours of bottom time; and the warm, clear waters offer comfortable diving conditions. These are also the reasons that countless underwater photographers travel to Tiger Beach every year hoping to capture stunning images of these beautiful sharks. But with the abundance of Tiger Beach photos nowadays, what can you do to make your images stand out? Let’s take a look at some tips and techniques for creating unique, memorable photographs during your next trip to Tiger Beach.

What Haven’t I Seen Before?

Before my last trip to Tiger Beach, I asked myself, “Are there any types of images that I have not seen lately from this location?” The first thing that came to mind was more than one tiger shark in the frame. So my goal was to capture images of two or more tiger sharks in close proximity. Whenever I would see two tiger sharks starting to approach each other, I would start shooting. Typically one or both of the sharks tended to veer away before they got very close to each other, but every so often their paths intersected, resulting in an unconventional composition that grabs the attention of the viewer.

So before you even arrive at Grand Bahama, look at other images that have been taken at Tiger Beach, and ask yourself what you might do differently to set your images apart. It could be as simple as a different approach to lighting, or something a bit more complicated like targeting multiple sharks together in the same frame.

And while we’re on the subject of multiple sharks…

Don’t Ignore The Other Shark Species

Sure, the tigers are the stars of the show at Tiger Beach. But don’t focus solely on the tigers to the exclusion of the other incredible sharks you’re likely to see. At some point during your diving at Tiger Beach, there will likely be lulls in the tiger action. Use this as an opportunity to observe and photograph the other sharks. An image with multiple Caribbean reef sharks can be just as intriguing as an image with multiple tiger sharks.

You could even challenge yourself to see how many different shark species you can get in one shot. Although many underwater photographers see species other than tigers as somewhat of a nuisance, sometimes those lemon and reef sharks getting into the frame along with the tigers can be a blessing in disguise. After all, what better way to show the amazing variety Tiger Beach has to offer than an image with several species of sharks?

Include Other Divers and Photographers

As underwater photographers, we not only want to produce compelling images, but we want those who see our images to care about the animals we photograph. This is especially true with sharks, which are some of the most misunderstood members of the animal kingdom. Images that include meaningful interactions between other divers and sharks go a long way in countering the constant negative portrayals of sharks so often see in the media. Concentrate on images that show a connection between the diver and shark, such as a diver looking at the shark, or a photographer in the act of capturing their own image of the shark. Seeing peaceful coexistence between shark and diver in this interaction will produce a emotional response in the viewer than simply seeing some divers in the background, and perhaps even change some misconceptions about sharks in the process. 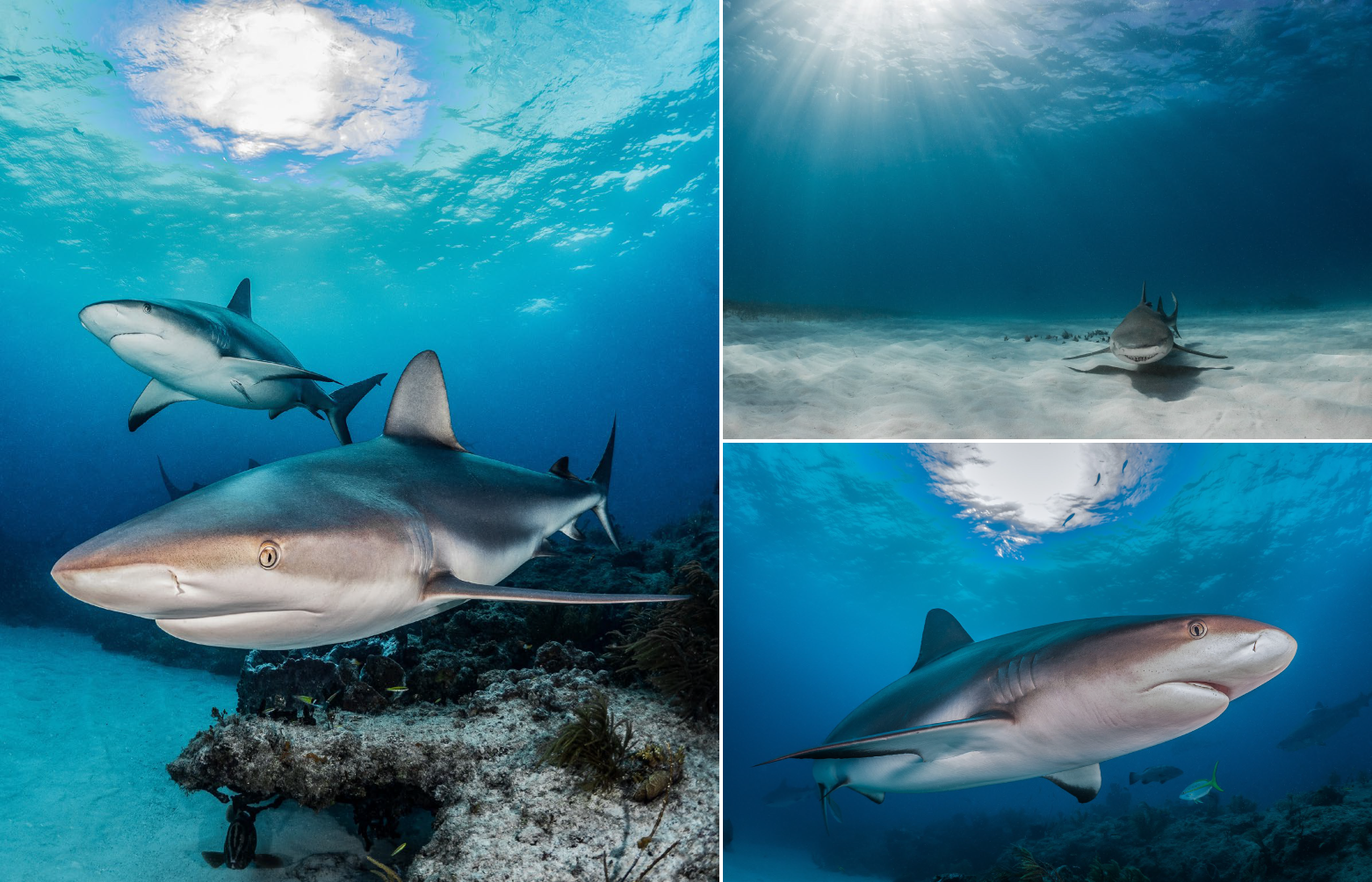 Since dives at Tiger Beach take place at depths averaging only 20-40 feet, there is an abundance of ambient light. Use this to your advantage, and experiment with different lighting techniques to diversify your images. One of the simplest techniques involves capturing sunrays piercing through the shallow water. Use a fast shutter speed (I typically shoot between 1/200-1/320 sec) to “freeze” the sunrays, and adjust the aperture as needed for the correct exposure. By taking advantage of sunrays, an otherwise bland image of a single lemon shark on the sand now becomes more dramatic due of the interplay of the sunrays, the shark, and the negative space in between.
Sunballs are another way to add drama to an image. Using a fisheye lens is preferable, and a fast shutter speed will work best; compensate on the exposure by using as low an ISO as possible plus a smaller aperture (f/13-f/22). Point your camera very slightly upward to frame the sunball and subject, and use strobes to illuminate your subject in the foreground. Play with different combinations of shutter speed and aperture to create a softer sunball (slower shutter speed) or a clearer, crisp sunball (higher shutter speed).

And don’t forget about your strobes! I’ve often seen photographers at Tiger Beach who extend their strobes far out to the side of the housing, and then not touch them again for the rest of the dive. Remember that you don’t necessarily have to try to illuminate everything in the frame. Sometimes a bit of directional lighting makes for a more interesting composition. For instance, try bringing your strobes in closer to only fill in part of a shark’s face while using ambient light to illuminate the rest of the shark. This creates a powerful contrast in light that immediately directs the viewer to the shark’s striking visage.

After my first trip to Tiger Beach, I assumed that the entire location was comprised of just a sparse, sandy bottom. That’s all that we had seen during our time there. But prior to my second trip, I started seeing images coming back from Tiger Beach showing colorful reefs. I spoke to the dive operator prior to my second trip asking if it would be possible to dive the locations with the reefs. The dive operator was happy to accommodate the request, and I was thrilled with the results. Not only does the reef provide an interesting backdrop, but it also allows us to depict to a greater extent the shark’s interaction with its environment. Use the reef to develop the composition of your images by experimenting with using it as a stage for the entire scene, or just use it to frame a portion of the image. If you have a specific shot in mind, talk to the dive operator about it. As long as the request doesn’t present any safety issues, the operators are usually happy to help. They want you to leave with the best images possible, which is great for both you and their business!

Ready For My Closeup!

Few images of sharks are as dramatic as the closeup; it provokes that visceral response of awe and fascination that people naturally have regarding sharks. The nearer you are to the baitbox and shark handlers, the better your chances of shooting extreme closeups. A good operator will ensure that everyone gets plenty of time near the baitbox. Remember, the closer your subject, the more you will want to bring your strobes in for even illumination. Since there are already so many closeups of sharks’ gaping mouths, try something a little different like a closeup of the eyes or a side profile instead.
Or, for another variation on the mouth closeup, don’t ignore that nurse shark that has parked itself in front of you for the last half hour. Sure, they can be a little annoying, but who doesn’t love a “smiling” nurse shark?

Lastly, don’t think that all of the activity takes place on the sea floor! There are some amazing opportunities at or just below the surface of the water. If the lemon and reef sharks are congregating at the surface as they tend to do, try to get some action shots by leaning your camera into the water from the boat (use a high shutter speed – these guys are fast!).

While you’re on the boat, keep looking around for interesting surface shots. You never know what you’ll find. On my last trip to Tiger Beach, I discovered that at the end of the rainbow there isn’t a pot of gold, but a group of sharks! (Even better than gold if you ask me).

Unique, intriguing photographs aren’t merely a matter of luck. As the Roman philosopher Seneca once said, “Luck is what happens when preparation meets opportunity”. Before your next trip to Tiger Beach, consider what kinds of shots you’d like to bring back. Communicate with the operator to ensure you’re getting the best possible environments to maximize your time in the water. Think about the techniques you’re using while photographing, and don’t be afraid to try something new. Combine your preparation with the outstanding opportunities Tiger Beach offers, and you’ll come home with images that stand out from the crowd. 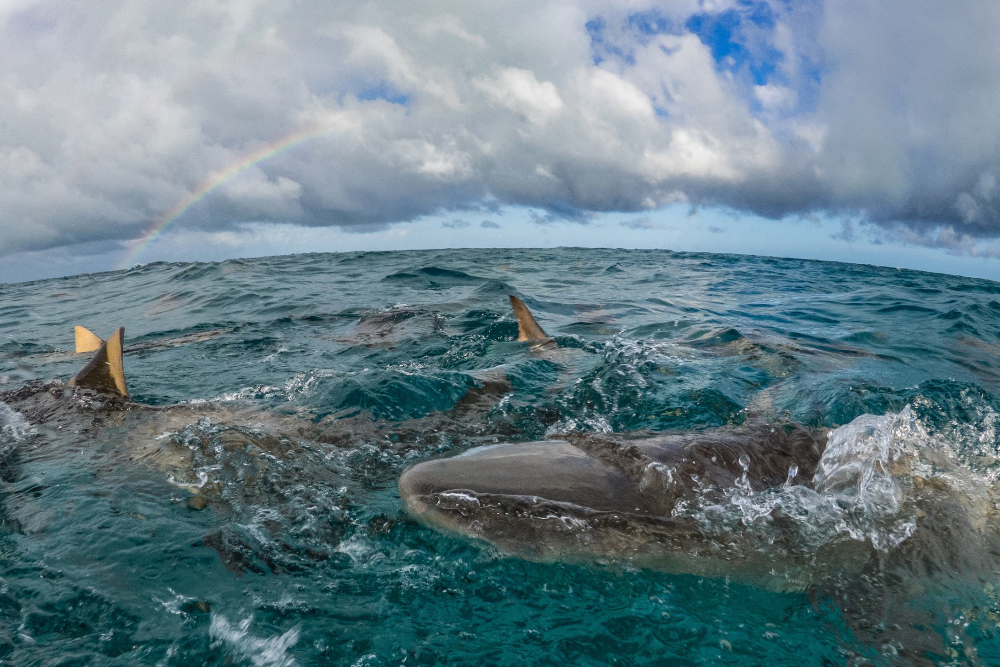