The island of Marettimo A mountain above the sea 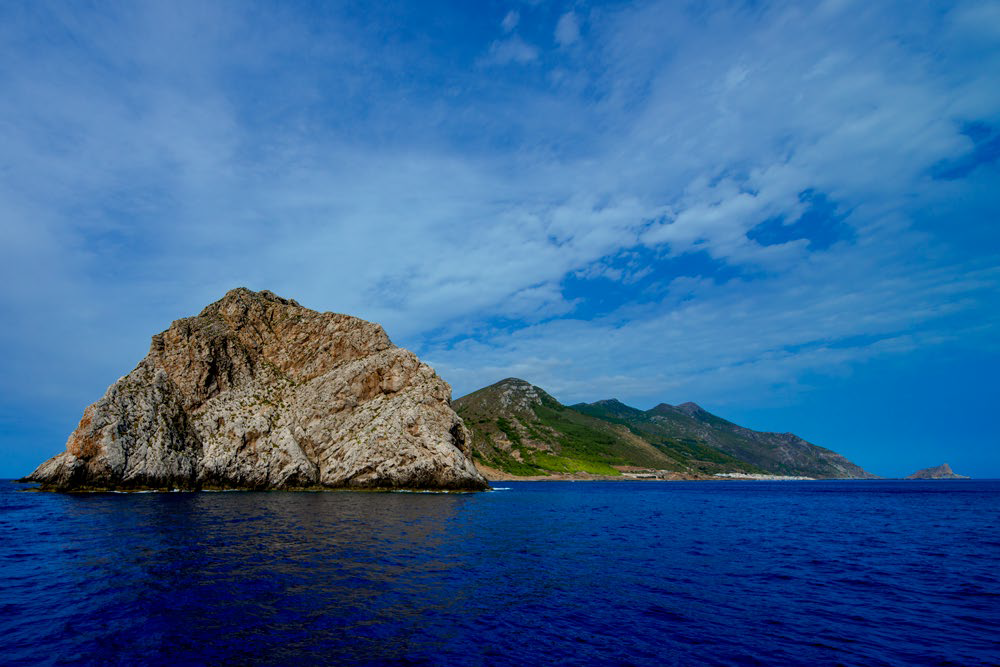 The island of Marettimo is part of the Egadi archipelago, located at the western end of Sicily, in front of Trapani. The archipelago consist also of Favignana (the largest and better known island), Levanzo and the smaller islands of Formica and Maraone. The whole territory is a protected marine area. We are talking of the largest protected marine area in the Mediterranean! Marettimo is the furthest from Sicily, the most westerly one, right in the middle of the Sicily’s channel, with more protected territory: the wildest! It is an island of the past times, where nature reigns unspoiled. Remained off the pace of modern life, it is isolated, remote and enchanted. There’s a small town on the East side and then end of the concrete. There are no roads outside the village nor cars, but only a mule track passable by the jeep of the Punta Libeccio lighthouse’s keeper, on the Southwest side of the island. Trails sometimes arduous traverse a good part of the island and allow us to explore the interior and the mountain…Yes, but on feet or by mule maybe! That’s the way it discloses: “A Mountain above the sea”. The top of Pizzo Falcone reaches 686 m.

There’s a lot of greenery, especially in the spring: it is the classic Mediterranean scrub, with all its perfumes. It is rich in water, which has carved the rugged coastline overlooking the sea. The waves did the rest. There’s also a luxuriant nature and a rich fauna, not only below sea level: wild sheep, wild boars, rabbits, etc…The Island is the nesting site of the second colony in the Mediterranean of the birds of the storms and the rare Bonelli’s eagle. There are also many resident birds: herring gulls, shearwaters, peregrine falcons, kestrels. During migration it is easy to meet cranes and storks. The island is appreciated not only for the wonderful diving, but also for its territory. We have the typical Mediterranean sea

bed, rich in colors and life as in few other places! The dive sites are many, for different levels of difficulty and suitable for different degrees of experience. There are dive spots along the coast but most are shoals of which the island is rich and all dives are made by boat.
Let’s see some.
We are 10 minutes away by boat, facing the village, a large area of shoals covered with sea grass (Posidonia oceanica) that fall to depths varying from 15 \ 20 m to 35 \ 43 \ 45 m. There are a number of dive spots in this area. 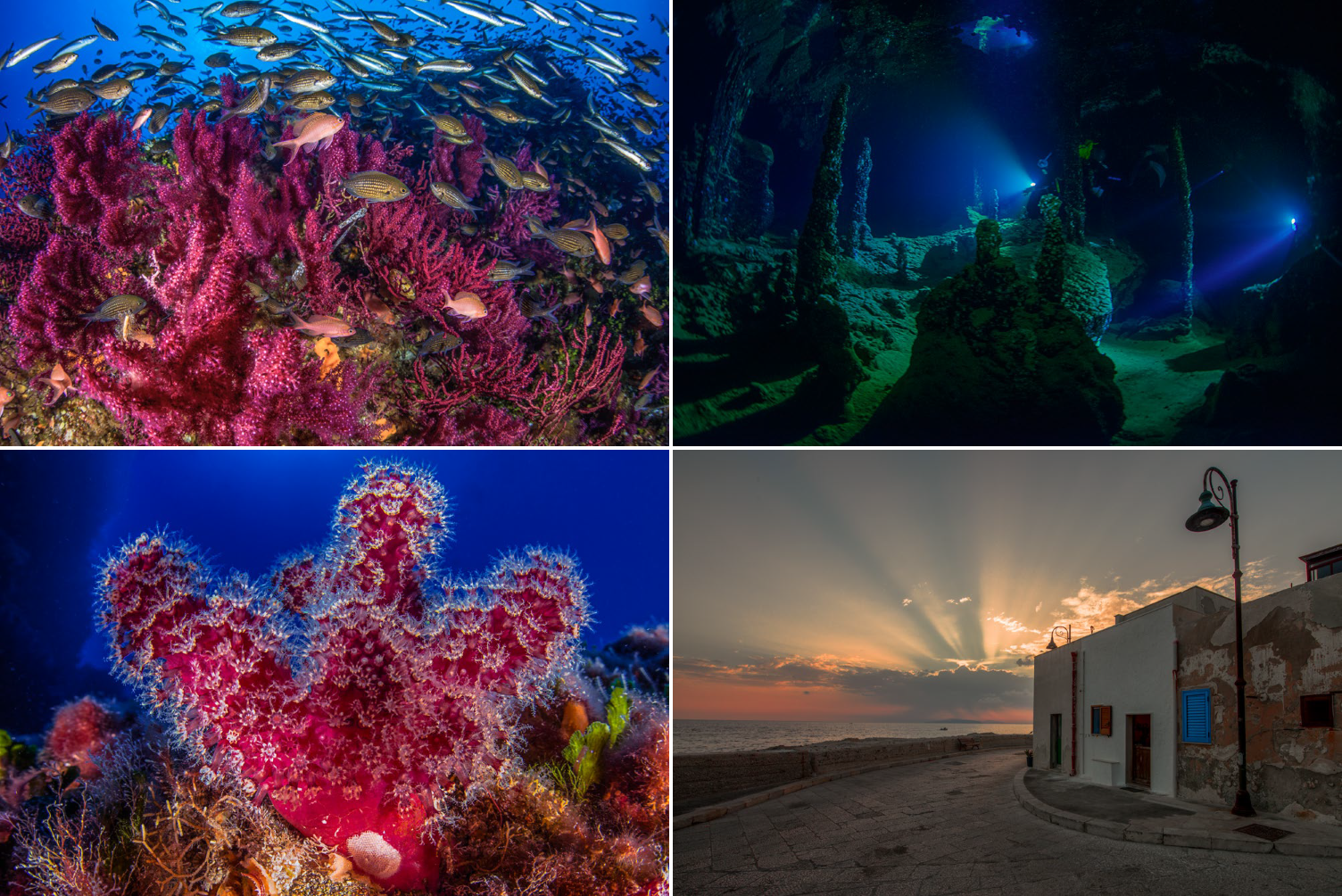 We are in a spot where we find a shoal of about 18 \ 20 m which drops steeply to 40 \ 42, and where the violescent sea-fans (Paramuricea clavata) are the masters. Flanked to the wall, we find a large boulder that reaches 17 m whose base seems to lie at 40. Such base is very close to the wall, while on top it creates a corridor of a few m in width, along about fifteen with gorgonians to the right and to the left. The rocky substratum is full of sessile life and sponges of every color. Crevices are inhabited by groupers, forkbeards and breams while, resting on the bottom, we may find red scorpion fishes. On high, into the blue, we can easily meet snappers and barracudas…We were talking about the big rock…in fact it is not resting on the bottom but on a couple of large stones. It creates a kind of cave with an easy access and two large windows that make fantastic lights games. The vault is inhabited by porter crabs, lobsters and slipper lobsters. We are 40 m deep…shame to have to go back!

Not far to the South we find a vast seagrass meadow at 15 / 20 m deep, falling with scattered boulders on a backdrop of 25 / 30…the crazy thing is that below is all drilled and hollow and in some places there is a large amount of passages, caves and tunnels. Light beams filter, passing from cave to cave, some dark and others where sunlight blades enter. Those caves are the domain of encrusting sponges, stony cup corals (Astroides calycularis), porters crabs, slipper lobsters and groupers.

In front of the small cemetery south of the village, at a depth of about 25 m, there is the Klizia wreck, a small freighter that sank in the sixties. It lies capsized but we can easily get into the small cargo holds and give a look at the engine room. For photographers, the propeller and the rudder that shoot up towards the surface grant some nice shot. Groupers, torpedoes and huge noble pen shells (Pinna nobilis) are easy to meet within the boatswain cove.

Sailing towards south we arrive at Punta Bassana: a source of diving spots!
The tip of the underwater promontory is beautiful. The wall falls straight from 9 to 35 m with large colonies of stony cup corals (Astroides calycularis) at the top and forests of violescent sea fans (Paramuricea clavata) up to the bottom that, incredibly, start from moderate depths such as 18 / 20 m. It is easy to meet snappers at the base of the promontory and white bream on top. Wherever moray eels, parrot fishes and clouds of anthias and damselfishes. Large schools of small fry where often small amberjacks and barracudas plunge. In front of the promontory three large rocks rise from the bottom, their basis between the 45 and the 38 / 40 m deep…to give you an idea, due to the depth you can spend a dive on each one of them. The closer to the headland is called the hollow rock because of a large cavity opened to the outside on the East side. The hollow rock and the promontory create a channel, covered in Paramuricea clavata from both sides. On the summit, at a depth of about 24 / 25 m, there are more. Easy to meet there big snappers, tunas and large shoals of breams. About 100 m to the North stands the rock of Tramontane, with similar characteristics to the first: about 40 m deep at the base and 26 / 25 at the top, the side facing the North wind rich in sea fans. Worthy of note is the outer rock, separated from the other two to the South, the bottom at 40/45 m. This rock arrives on his top to 29 m, but it is a pinnacle of a few meters. The wall exposed to north-east is spectacular, only a hundred meters wide but wonderful and very colorful: the joy for all the photographers and biology enthusiasts. It is a benthos highly rich in species such as stony cup corals (Astroides calycularis) and yellow cluster anemone (Parazoanthus axinellae). 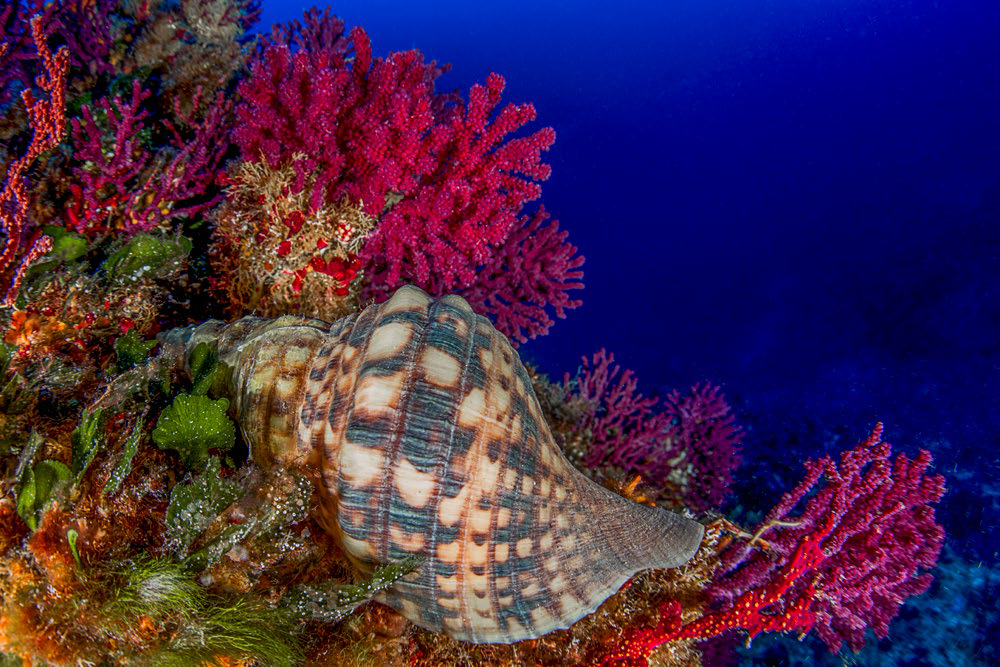 Near the bottom are often encountered St.Peter fishes, big clawed lobsters, newts, lobsters, large red scorpion fishes, moray eels and forkbeards inside the cracks. It is a place of exceptional encounters: I happened to see tunas, mola mola, large amberjacks, turtles.
The only sore point is the current.
Often the entire area and these rocks are crossed by impetuous currents, meaning that these dives must be led by an experienced guide and require a careful route planning. But on the other hand there is a reason why some places have something more: under water the current is life!
Continuing to circumnavigate the island, we come in the vicinity of the dive which is worth the trip to Marettimo…If you like caves…
The cathedral is so called because it was the first thing I said putting my head out of the water, after exploring it in ’91. I saw the entrance the previous day, by accident, while I was following the edge of Martina Point in search of diving spots. We are in zone “B”, about 30 m deep. The entrance is large, but the interior is very dark and the torchlight, however powerful, does not punch a hole. At about thirty meters from the entrance we find, in the middle of the great hall, a column! It comes out of the mud and seems to support the vault! Large forkbeards slip in the ravines. We feel like being in an alien environment and this feeling becomes stronger and stronger as we penetrate inside: other columns, large and truncated or fine and thin, stalactites, stalagmites …. Someone is lying, broken, at the bottom. Here and there on the bottom we may see some fossilized bones embedded in the rock and fossil shells: the time has stopped. Emotions aside, the dive is relatively easy: inside we climb up to 18 m to exit from where we entered. The only really important thing is a perfect buoyancy control, since the light silty fund raises for nothing! A unique dive in its kind!
Now let’s skip a part of the island and go to the limit of the zone “A” of the protected area on the north / north-west side. There is a big shoal, the Cala Bianca (white cove), which covers several hundred meters off the coast. Think of a large plateau about 10/12 meters deep which falls on both sides at different depths, either in the form of an extended landslide of boulders up to a bottom of pebbles at 30 / 40 / 50 m depth, or in the form of large steps in the outer part, with small walls rich in white, yellow and red gorgonians depending on the depth. There are various dive itineraries on this edge, depending on the depth and the shoal section that we will explore. At the deeper parts, there are beautiful branches of the gold coral (Savalia savaglia) amid sea fans (Paramuricea clavata), elephant ear sponges (Spongia agaricina), yellow tree sponges (Axinellae cannabina), large colonies of stony cup corals (Astroides calycularis) and yellow cluster anemone (Parazoanthus axinellae). In short, a lot of color! In the upper parts, on the summit of the shoal, let’s say between 10 and 25 m deep, we may encounter groupers, goldblotch groupers, breams, sometimes even the pharaoh bream, black sea-breams, amberjacks, parrotfishes and often large schools of barracudas. Sometimes also eagle rays!

How to get there and where to stay

Marettimo can be reached by hydrofoil or ferry from the port of Trapani. The nearest airports are the Marsala’s Birgi airport, at 18 km from the port, and the Palermo’s Falcone Borsellino airport, at about 85 km. There are private shuttle services from the airports or public buses. You can also get there by car, but remember that once on the island, you have to park your car which cannot be used anymore.
At Marettimo there are not many hotel facilities: a couple of apartment hotels and some B & B, but there is a good choice of private apartments that the islanders rent to tourists.
For info:
Marettimo Diving Center
Via Cuore di Gesù, 5 – 91023 Marettimo (TP)
Fabio Tedone mobile +39 333 1902720
www.marettimodivingcenter.it
info@marettimodivingcenter.it

WORDS by Fabio Tedone and PICTURES by Sergio Riccardo