In this virtual laboratory, we will analyze a single click by passing it through X-rays! We will study some behaviors from the biological / naturalistic point of view, to better understand how or when to find the best conditions to shoot certain subjects, and will tell a little of curiosity dedicated to Nature.

We will then make a careful analysis of the photographic technique applied to the shot; we will explain what choices, and the motivations that led the photographer to certain settings or reasoning, and we will see how the photographer puts into practice some techniques and tricks to achieve the desired result. Finally, we will conclude with examining the post-production used to finalize the image. 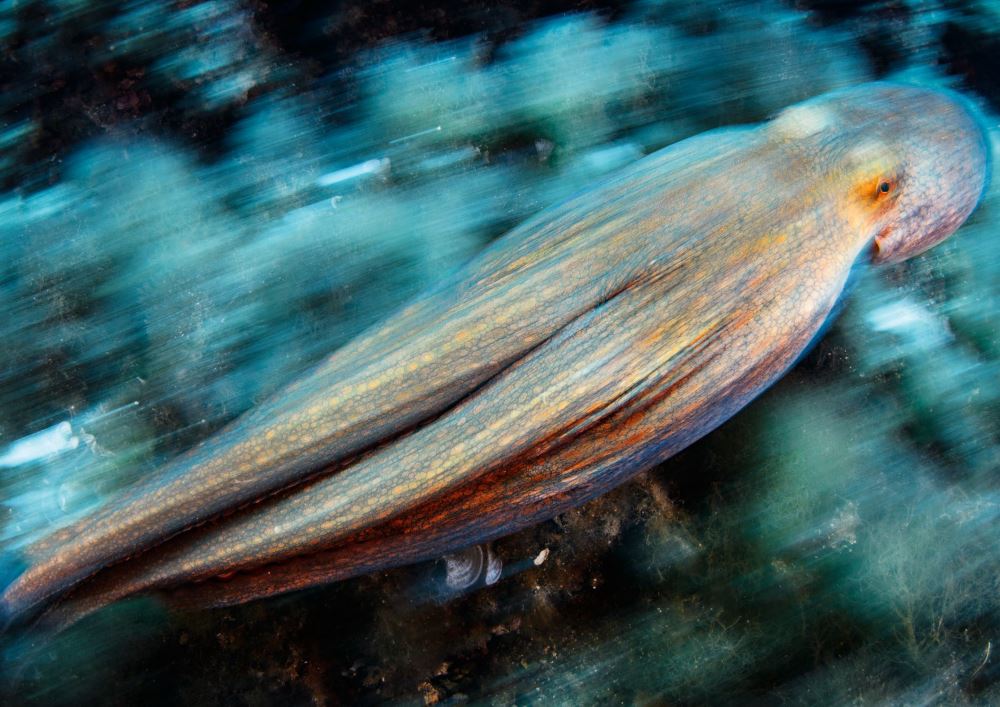 “Escape”, today’s picture, was shot in June in the Ligurian Sea in the Protected Marine Area of Bergeggi, where, a little like in the whole Mediterranean Sea, during the late spring is common the appearance of mucilage. It looks like a real cotton blanket that wraps around the substrate from -10 to -40 meters deep and creates many problems to the organisms that are covered (sea fans, brown algae, Neptune grass, etc. etc.).

THE BIOLOGIST’S POINT OF VIEW

The Mediterranean octopus (Octopus vulgaris), despite being in absolute one of the most photographed subjects, has so many behaviors and biological facets that make all the photos of this animal different from each other. In this wonderful photo, Marcello caught one of the many defensive behaviors of this eclectic cephalopod. Although being a mollusk that remains in contact with the bottom, in some cases, when its mimetic skills fail, escape is the only hope. Then the octopus changes strategy: while still moving away it slowly recalls inside its mantle’s cavity a lot of water, swelling.

Then the octopus pushes violently out the water loaded in the mantle through the funnel, which is a funnel-shaped organ made up of two overlapping muscular very mobile flaps, located in the ventral region, through which octopuses can eject water from the mantle’s gills cavity. The pressure thus generated by the ejected water quickly pushes the octopus away from danger: it is a water jet technique common to all cephalopods. To this, it must be added a further impulse given by the impetus transmitted by the simultaneous closure of the eight arms. At this point, the octopus doesn’t need mimicry any longer and it loses some of the coloration and rough appearance of the skin. This is the moment when, if the octopus deems it useful and if still it has some available, emits a curtain of ink, more a chemical deterrent than a visual. The octopus considers this type of escape as “estrema ratio” (last resort). In fact, since this swimming brings forward the mantle and the head first (from left to right in the picture), leads to keep uncovered the main functional organs that it cannot regenerate.

It is therefore a defensive or utilitarian attitude that octopuses use rarely and for a short time. As soon as it can, the octopus returns to the classic headway: it camouflages itself or takes refuge in a narrow crevice. From a naturalistic point of view, the panning shooting is perfect because it makes the idea of the rapid movement due to the hydro-jet, making the photograph dynamic and descriptive at the same time.

THE PHOTOGRAPHER’S POINT OF VIEW

As a photographer, one of my priorities before starting to shoot is to evaluate the environment in which the subject to be filmed is inserted, and especially if the relative background can be valid from a functional and aesthetic point of view. In the first instance, I always try to set as much as possible in their environment the subjects that I shoot underwater, so that I can tell with a single shot something more about where they live or how they interact with the environment. However, often it happens that the surrounding environment is not very photogenic or at least not too interesting for photographic purposes. Therefore, sometimes it occurs to try excluding the background with different techniques, thus emphasizing more the portrayed subject.
I found this friendly octopus on a rock a few meters deep, at the Isle of Bergeggi. It allowed me to approach and to take a series of photos in complete tranquility, without denoting any kind of disturbances or signs of distress. After a few minutes spent together, it started moving a few meters, but very slowly and without ever running away for good.

After a quick reasoning, and understanding that shortly thereafter it would have disappeared into the blue, I immediately decided to try the panning technique to achieve two objectives: the first to hide / blur the background that was not very colorful and interesting, mainly because of the presence of a lot of mucilage; the second to give dynamism to the shot and capture the movement of the octopus itself. Panning is a photographic technique consisting in capturing the image of a subject by following its movement in such a way as to make the background blurred (technically it would be more correct to say “moved”).

In photography is a very effective technique to give dynamism to our shots and consists in following with the camera the direction of the moving subject (i.e. from left to right, or vice versa), using an exposure time that allows to clearly photograph the moving subject, creating the effect of a blurred trail in the background. Applying this technique in underwater photography is certainly not easy, but after a little practice, you will surely get good results. It can be performed with all the lenses, even with the wide-angle we generally use for our wide shots. The first thing you need to do is to reduce the shutter speed so to obtain a time between 1/50 and 1/10, and then try to go along with the few moments of the subject’s movement.

Defining a suitable shutter speed is difficult because it depends on how quickly the subject moves: basically, the slower the moving subject and the shorter the shutter speed. The choice of exposure time is a key element in the success of the panning. It should not be too short, otherwise the background blur will be lost and therefore the technique becomes useless.
Also, it should not be too long because it is difficult maintaining a smooth camera movement, and because there are few shooting conditions in which the subject maintains for a long time a distance and an angle approximately constant with respect to the photographer who follows.

After a series of tests, I found the settings that I thought could work, closing the diaphragm in order to slow down the time and obtaining an exposure reading of F18 1/20 ISO 200. The camera used was a Canon 7Dmk2 with Canon lens 8-15mm fisheye, Nauticam housing and minidome. I also set the sync flash on the second curtain, in order to have the flash shot at the end of the exposure time.

As I said, it is not easy, especially the first times, to be able to get the important parts of the subject perfectly in focus and, depending on what we are photographing and its shape, some parts will still blur because they do not follow in a regular way the main movement trajectory.

In the development phase, I didn’t make many interventions on this photo. I limited myself to adjust brightness and overall contrast and eliminate the strong green dominant that formed during shooting, all using Adobe Lightroom in its basic and HSL panel, with the help of the radial filter. Moving on to Photoshop, I restored the octopus colors, reduced a little of noise and applied a slight sharpness.

WORDS and PICTURES by Marcello Di Francesco and Fabio Russo 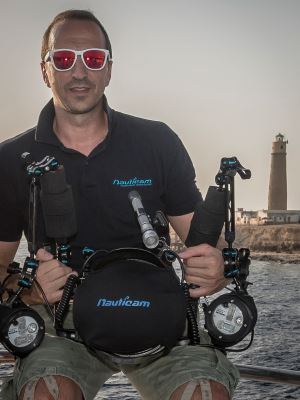 Marcello Di Francesco: Scuba Diver Instructor and Freelance professional photographer based in Italy, specialized in Underwater and Travel Photography. He regularly contributes with some Italian and International specialized magazines. He has also been invited to join National and International juries in several underwater photography contests. Personal website: www.marcellodifrancesco.com 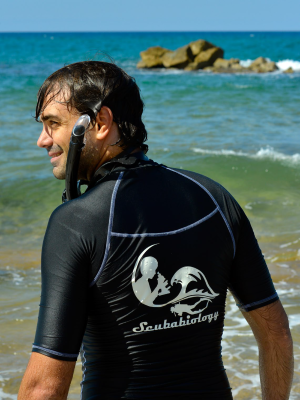 Fabio Russo: Graduated in natural sciences at the Federico II University of Naples, naturalist photographer, scuba diver and popularizer. He collaborated with several magazines, websites and associations through photos and articles on marine biology. On Facebook, he is the administrator of the Scubabiology page for naturalistic popularization: facebook/Scubabiology