The Sorrento Coast In the sea of the sirens

The Sorrento Coast, already discovered by Ulysses in his pilgrimage through the waters of the Mediterranean, is for its historical and natural aspects, one of the most beautiful coastlines of Italy, offering scenarios so fascinating that even Homer sang it in his Odyssey.
In fact, the legend tells that just a short distance from this coast, the sirens tempting voices tried to enchant Ulysses, who resisted their sweet call by tying himself to the mainmast of the ship.
Indeed, even without the singing of these creatures, the coastline of Sorrento can bewitch with its natural beauty everyone who comes.
The approximately 40 kilometers of beautiful coasts forming the Sorrento Peninsula, are a sweet succession of green promontories and welcoming inlets, whose the Ieranto Bay is one of the most famous.
This bay, that opens onto the southern coast of the Sorrento Peninsula, just across the Capri’s sea stacks, is a place of untouched beauty, donated to the FAI (Italian Environmental Fund) in 1986, to be kept and preserved in its total integrity. The calcareous nature of the area also favors the presence of numerous caves, crevices and cavities.
Moreover, in this beautiful scenery there are even the shoals rising offshore, where the constant presence of small bluefish favors the passage of pelagic species such as tuna and amberjacks.
A seabed therefore suitable for any underwater interest either photographic, naturalistic, or even caving.
These are just some of the aspects that the depths of the entire Sorrento Peninsula offer to divers in their rich itineraries of over 25 spots, perfect for diving. 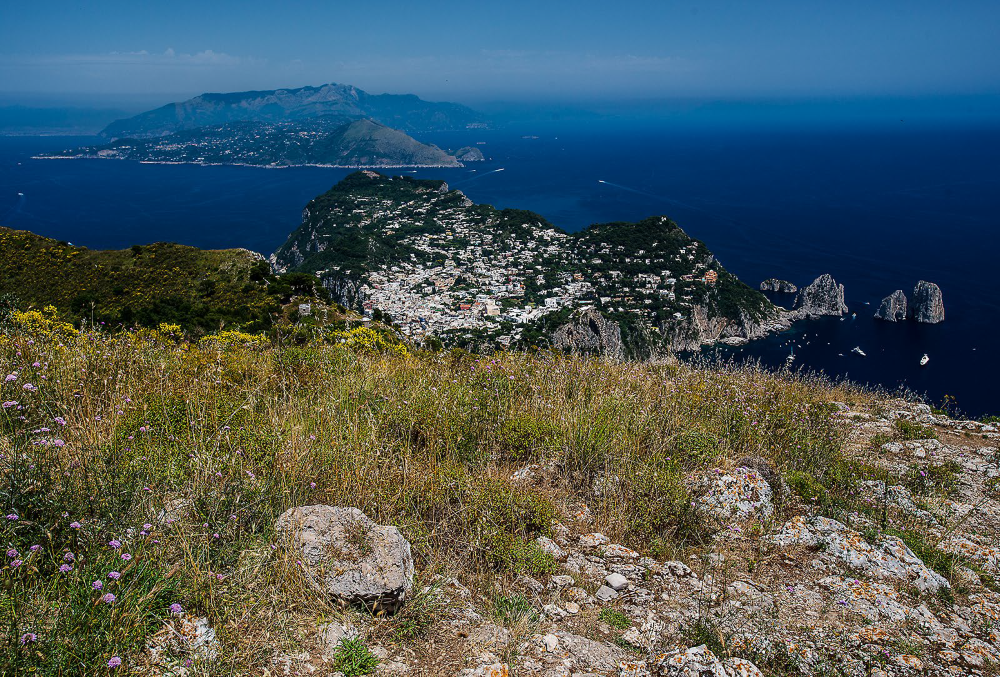 Let us briefly remember the most significant:
PUNTA CAMPANELLA
The bottom falls steeply on the side facing the Gulf of Naples, while slopes more gently towards the Gulf of Salerno.
Due to the currents that often hit the promontory, an amazing variety of wildlife develops here, filling with color every smallest space of the cliff.
Near the cape, a big rock off the coast provides, even at little depth, spectacular walls covered with colonies of Astroides, but if we go down to the bathymetry of 40 meters, we find the seabed entirely wrapped by big fans of Paramuricea.
SCOGLIO PENNA closes southward the Ieranto Bay.
Here we can explore steep walls opened by suggestive passages.
Once over the depth of 30 meters, ample walls wrapped in red Paramuricea appears, offering interesting angles for photographic images.
Many sedentary fishes frequent this seabed, which also represents an important area for the passage of schools of yellowtail and other species of pelagic fish.
Who is rather fond of caves should not miss the opportunity to dive the ISCA CAVE (Grotta dell’Isca), which opens with a vertical entrance only 8 meters from the bottom. The vault and the walls of the cavity immediately appear covered by Parazoanthus and sponges of all colors, while the sun’s rays that penetrate inside the cave create evocative lighting effects. 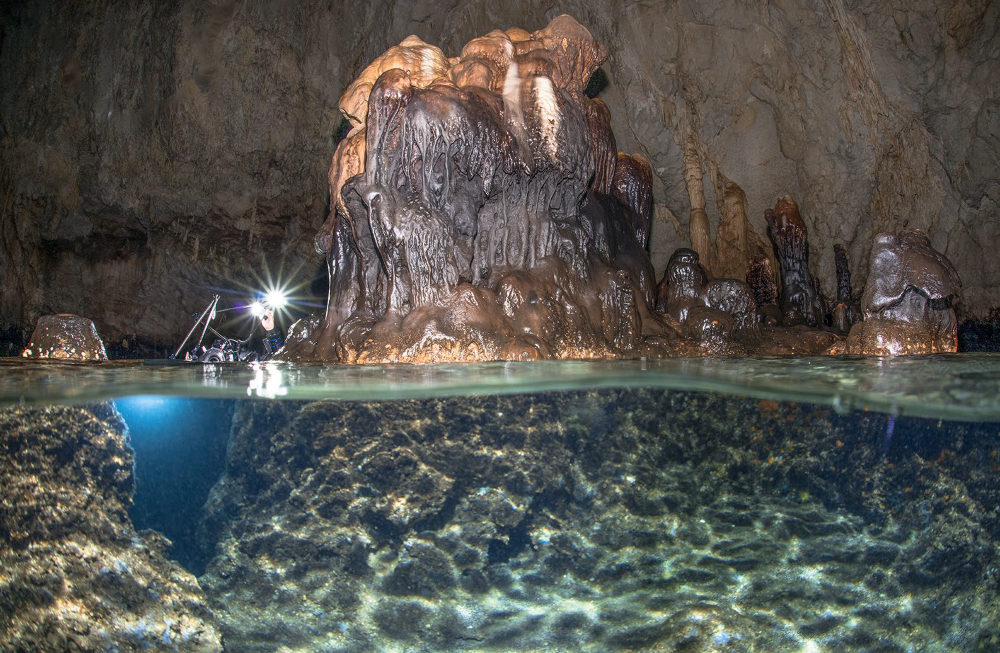 Another cave is the one of the Sapphire – GROTTA DELLO ZAFFIRO, which opens only 3 meters deep with a wide main entrance, and a second tighter opening at about 12 meters. Inside, you can reach a large air chamber surrounded by several limestone formations, which give additional beauty and mystery to the cave.
easily recognizable by the remains of an ancient, dominating Saracen tower. The cliffs plunging into the blue are rich in a very live coral substratum, where the different shades of sponges, anemones, spirographs and many other animals stand out.
Here the Paramuricea, encountered starting from thirty meters deep, acquire unique and spectacular colors, ranging from deep red to yellow.
Thanks to the clearness of the water and the brightness of the underwater surrounding, the wall, which drops until over 50 meters, it is very spectacular even at considerable depths.
At around 40 meters depth there is a large branch of Savalia savaglia, the false black coral.
In the middle between the islet of Vetara and that of the Gaul’s, we can dive on a shoal with the top only 6 meters deep, known by divers as the Shoal of the Gaul’s – SECCA DEI GALLI.
The seabed, with a series of rocky crags, drops deep down and shape a suitable environment for the development of beautiful sea fans, where often some big lobster antennas show up. 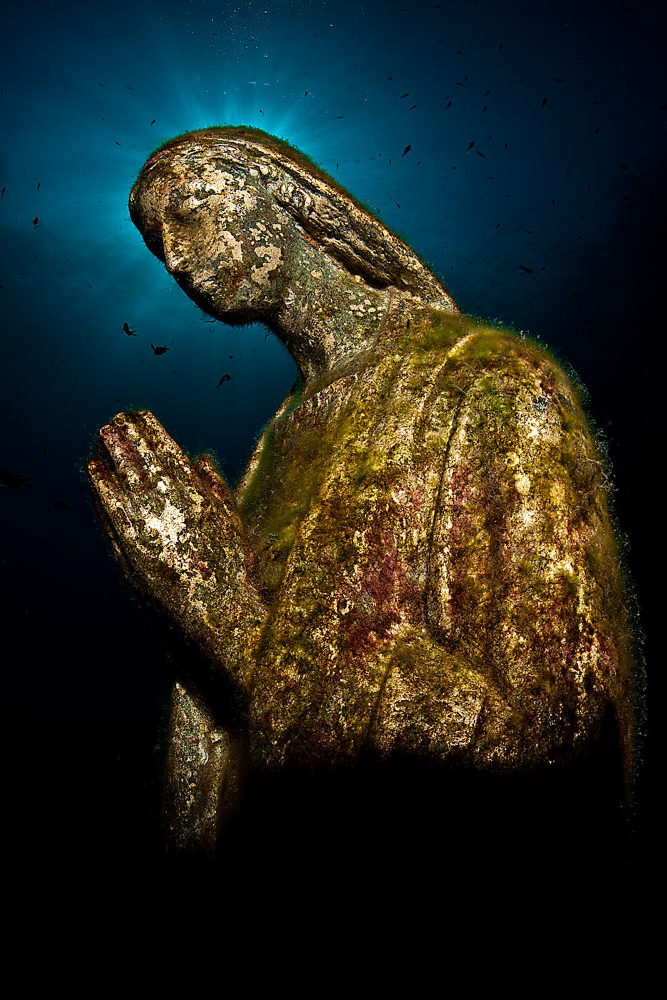 SCOGLIO DEL VERVECE (Vervece Rock)
The Vervece Rock is part of “A” Zone of the Marine Reserve.
At 12 meters depth, on a rocky plateau facing the marina and sloping gently down to the bottom, there is a statue of the Madonna of Vervece.
A bronze statue placed here in memory of persons missing at sea and, today, the subject of an important popular event that renews since almost 30 years. A wide vertical wall completely covered with the yellow Parazoanthus characterizes the outer side of the islet while the luxuriance of sea fans typify the two opposite sides. The red sea fans, on the eastern side, start from around 28 meters depth and continue up to 50, while the presence of yellow sea fans characterizes the diametrically opposite cape. Thanks to the rocky bottom morphology, the presence of the yellow sea fans forms a real underwater canyon, later baptized by divers the “Gorgonians Avenue”

PUNTA CARENA (Hull cape)
Probably the most beautiful and spectacular dive that can be done in the depths of the island but at the same time, due to the strong currents often present and the uninterrupted coming and going of local vessels used for the island tour, reserved exclusively for experienced divers. As the name suggests, the morphology of this dive remembers exactly the capsized hull of a ship.
It is in fact a rocky ridge jutting out for several hundred meters towards the open sea, immediately reaching prohibitive depths.
Thanks to the dominant currents, the wall of the southern slope explodes suddenly in all its colors and shapes. The sea fans, both yellow and red, reign supreme. Dense shoals of Anthias swim alongside the rock face forming real living walls.
The wall is becoming more beautiful and rich as we move away from the mainland along the ridge, until we come to the splits: two vertical cracks covered with sea fans on both sides and enormous sponges in the middle.
The meeting with pelagic fish is nearly always a certainty.
We are already far away from the cape and could be better to return on top of the ridge and go back toward the coast, to emerge inside the bay under the Lighthouse.
IL TRALICCIO (The Trellis)
Diving at the Trellis is exclusively reserved to technical divers.
In fact, the wall rich of corals and gorgonians falls abruptly towards great and challenging depths.
At the base of the wall, already over 50 meters depth, lying on the sand, a large trellis juts out into the open sea reaching the depth of 62 meters.
Covered with sponges, tunicates, red and bicolor sea fans, the Trellis is always surrounded by thousands of Anthias. Accomplice the water transparency, the show is truly breathtaking.
The return takes place strictly along the wall to perform the necessary decompression stops within a single small coastline inlet, where the floor degrades less vertiginously.
The BANCO DI SANTA CROCE (Holy Cross Shoal), for which it is advisable to base in Castellammare di Stabia, deserves a separate mention.
From a depth of about fifty meters, in fact, a series of spectacular pinnacles rise to the surface.
They seem to have the characteristic of being all-different from each other and accommodate various biocenosis, different for each wall portion.
The minimum depth of the pinnacles are in the range of 15 meters, making possible for everyone to enjoy these beautiful seabeds.
Beautiful the morphology of the pinnacles, that rise from the bottom and that together form a series of canyons, rifts and saddles where the fish gathers. Lovely the forms of life populating the rocks. Along one side, you can see a large amount of fluorescent cerianthus.
Along another, a few meters from the surface, a colony of Parazoanthus covers dozens of square meters of rock, but leaving the possibility for sea fans, sponges and bryozoans to grow and stand out from that soft, bright colored rug.
Deep down the red gorgonians rule, sometimes spaced out by the bright yellow of some branches of Savalia savaglia of remarkable size.
However, it is the amount and variety of fish, thanks to the ban on fishing, to make this dive extraordinary: sea breams, snappers, scorpion fishes, groupers welcome the divers since the early meters. In the summer, the sardines come and, with their synchronized movements, make this dive even more amazing.
Moreover, with a little luck, eagle rays twirl among these schools. 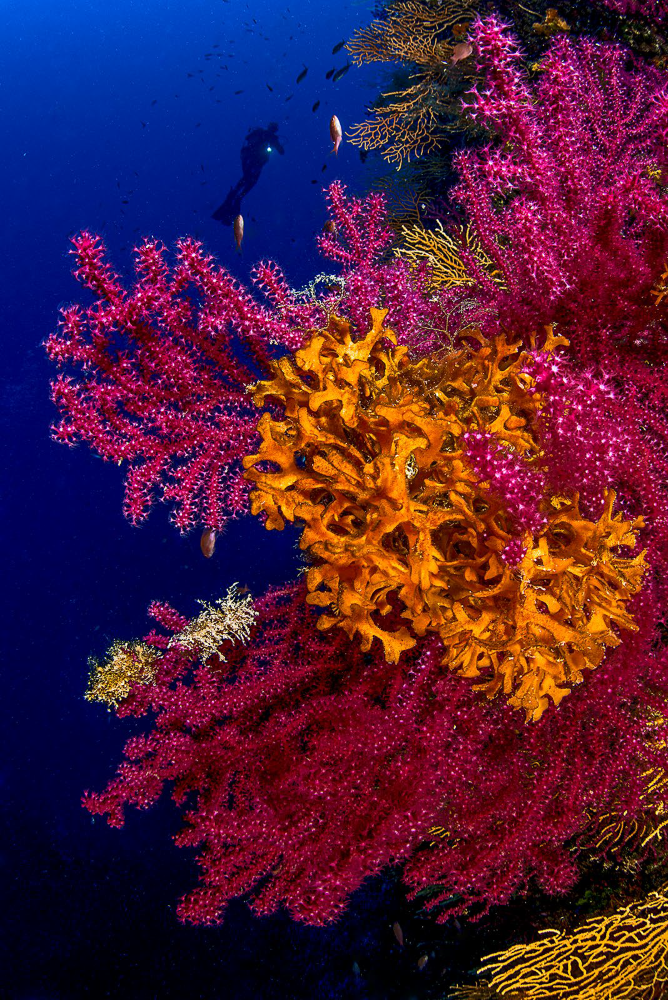 How to get there
Coming from Rome, follow the Roma-Napoli highway, then the slip road to Naples-Salerno.
Take the highway towards Salerno, exit at Castellammare di Stabia and then continue to Sorrento.
Once in Sorrento, go to Massa Lubrense and then towards Marina Del Cantone.
Where to stay
Villaggio Diving Nettuno at Massa Lubrense, Marina del Cantone
Hotel Montil at Castellammare di Stabia
Suggested Dive Centers
Diving Nettuno:
Tel. +39-081-8081051
info@villaggionettuno.it
Mr. Michele Mauro
Bikini Diving:
Tel. +39-338-9449567
info@bikinidiving.com
Mr. Pasquale Manzi

WORDS and PICTURES by Sergio Riccardo 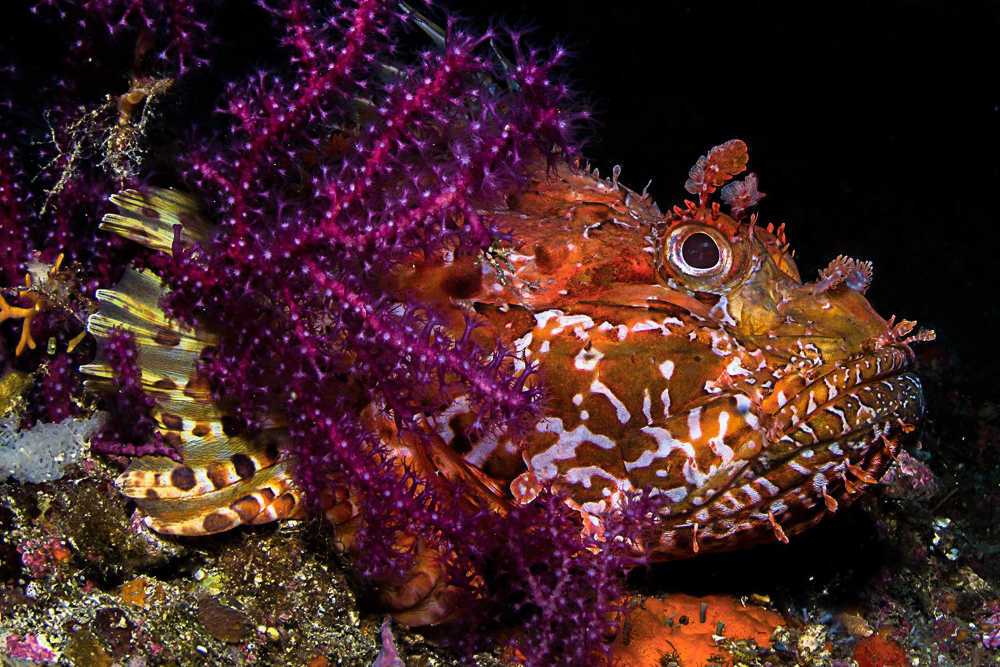