Winter in Norway The magic of Andenes 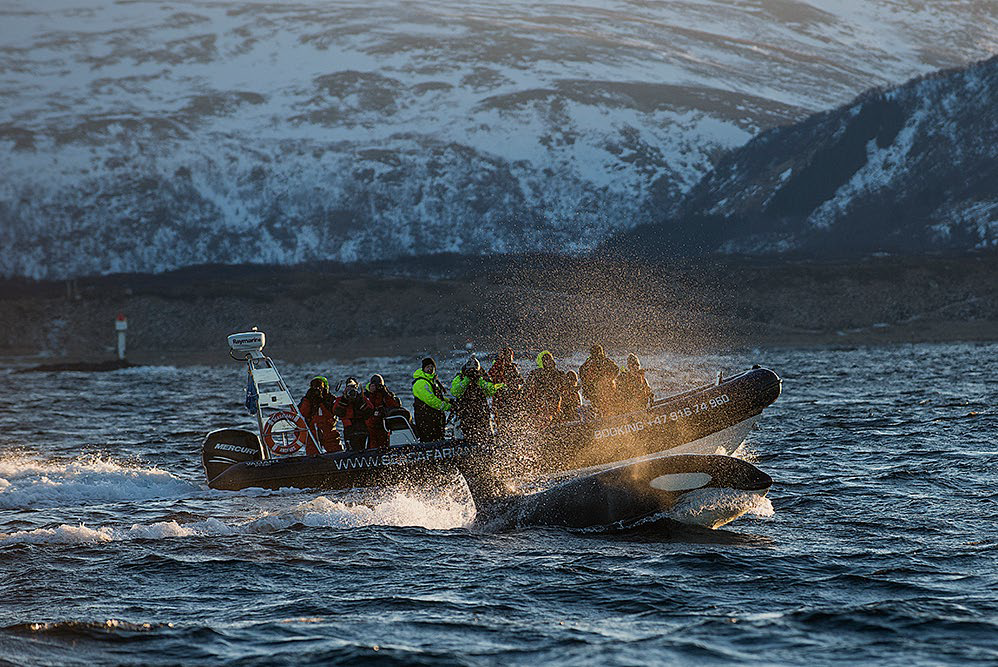 Usually the word we all love, diving, always gives us the idea of sea, sun, tropical temperatures and nobody would think to go in the middle of winter to Norway to enter the water with killer whales and humpback whales.
The journey is very difficult because, once you reach Oslo, it takes another two flights, with few frequencies, to get to Andenes, a small town on the tip of a fjord in the middle of the North Sea.
In January, the sunlight is very little, about 5 hours, and the sun rises just a few degrees above the horizon.
Nevertheless, I assure you that, except for the very cold and the dark that still creates a very special atmosphere, the emotions that you can experience in a trip of this kind are endless, both in the water and in the fantastic landscapes culminating with the opportunity of watching the amazing spectacle of the Northern Lights.
The trip needs to be very well organized and nothing should be left to chance.
The apartments where to stay are very few and hotels and practically non-existent. You land at an airport having a small room where collecting your luggage and just one employee.
From there, you calmly exit to the square serving also as a small parking lot.
I traveled with Divingtour, which deals with a bit out-of-the-ordinary travels and organized everything meticulously.
From the fishermen’s houses where to stay, called Rurb, to the tours on huge Zodiacs or, if you are lucky, on a good covered and heated boat, to go around the Cape of Andenes to witness the spectacle performed by hundreds of killer whales passing between mid-December and mid-February gorging on herring, waiting to migrate north during the warmer season.
What’s more, there are also humpback whales, a species slightly different from those we see in many other parts of the world.
This one has side fins completely white, while others have only the lower part of the side fins white. This allows you to pinpoint them from a distance, even with poor visibility.
For excursions, you can wear the classic Artic suit to assist from the surface to the show of these giants, or a dry suit for trying the meeting by snorkeling. Scuba diving is unfortunately prohibited.
After about 15 minutes, we go back in the boat and move to another school to dive again, and again for about 3 hours. On the way back, frost and especially fatigue bite, but as soon as we take off our clothes at the facility hosting us, they serve warm bread and soups to help us resume sensitivity in our hands.
In the afternoon – I remember you that night comes at about 3 PM – you can go for a walk or a drive around.
You can have a look to the typical wooden houses with Norwegian cod hanging off, the spectacular lighting effects created by the sun on the frozen lakes or to the snow-covered mountains, with their trees also covered in snow waiting for the night, when the light disappears and the expectation for the Northern Lights comes.
This event can give emotions beyond words: a completely starry sky colored with all shades of green and, in the luckiest cases, of red, creating a slow but steady motion.
We stayed there for eight days, which may seem like a lot, but the adverse weather conditions during the period require a certain number of days to get into the water at least 3 or 4 times.

I guarantee, however, that freediving gives high levels of adrenaline. Swimming around, you can watch the orcas closely enough because they are very curious animals and come close to see what kind of animals you are. Unfortunately, they never stop enough to let you take some nice shot.
However, the excitement I felt when the captain allowed me to dive, in the middle of the sea to an area 200 meters deep and crossed by a canyon of up to 600, was indescribable.
Herrings pass inside this channel and groups of killer whales dive up to those depths for driving them out and bringing to the surface, where the usual slaughter happens allowing both birds from above and killer and humpback whales from under to eat as much fish as possible.
When killer whales eat, it is quite easy to succeed seeing them because they are usually very fast, but slow down their march while feeding.
We stand still in the middle of the sea, with waves always quite high and a temperature of maximum 4 / 5 degrees Celsius.
As soon as something comes close to our lenses, we shoot pictures, hoping to bring home something acceptable. The extreme conditions and wearing a dry suit without weights do not help at all, but we have fun like children and maybe this frenzy makes us unaware of the temperature.
Entering into this water was what the most exciting I have ever tried in my long diving career.
You look around amongst at least 3 meters high waves, which make difficult to see the orcas, until a fin shows up in front of you.
Adrenaline grows: they look at us from just under the water, seem like smiling, and disappear all of a sudden. Then, with their image still in our eyes, we begin to look for other orcas.
Often, other groups come: some passing very close, maybe swimming on the surface of the water as dolphins usually do, other swimming a few meters below the surface. Nevertheless, they all are of infinite elegance, and mostly unexpected, we sense this puff, different from everyone else, much more powerful and with an acrid smell of rotting fish.
I turn and see two whales, not very large – around 10 meters – and coming straight towards me. Then they slightly correct direction and I see them passing close, no more than four meters away.
Even with cloudy water, I can see them very well. I have my heart in my throat: I can see the pure white fins standing out in the foggy blue-green water. It has been only a quick passage, but the show is one that you will remember all your life. During our three outings, we always saw lots of orcas and many whales, but we would never have hoped a meeting that close.
Here in Norway shops close between 4 PM and 6 PM.
Later, only two supermarkets let you shop up to 10 PM. Prices are quite high – compared to our standards – but still better than in restaurants.
There are two restaurants and a pizzeria, and the day specials are whale or reindeer fillet in mushroom sauce.
Therefore, my suggestion is grocery shopping and home cooking. Moreover, dinnertime is early.
After dinner, the evening program consists in waiting for the Northern Lights and then, almost frozen to death, to go to bed by 10 PM.
Bearing the images of the giants of the sea in your eyes. 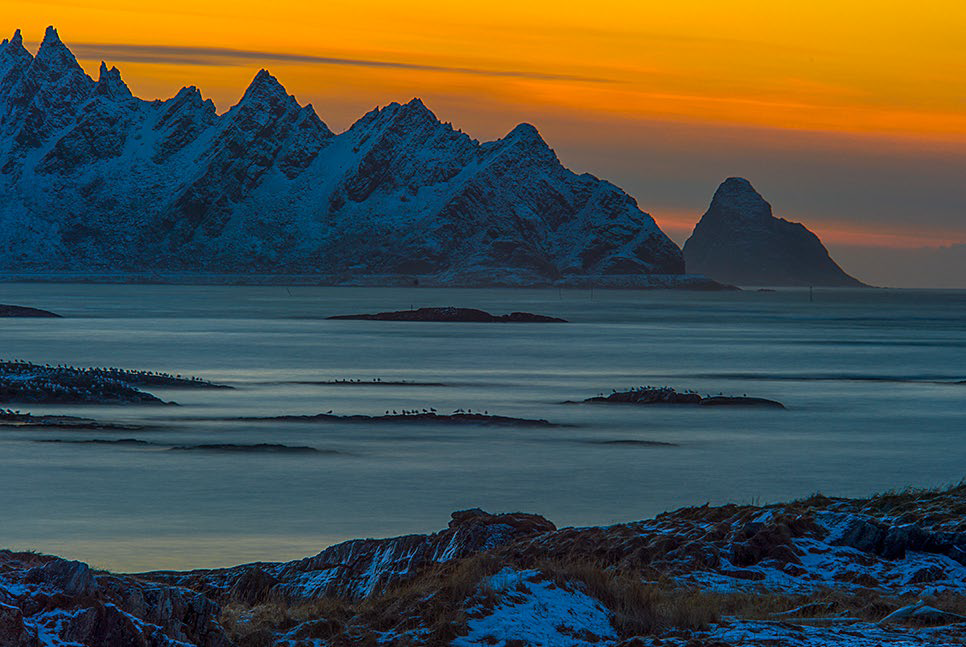