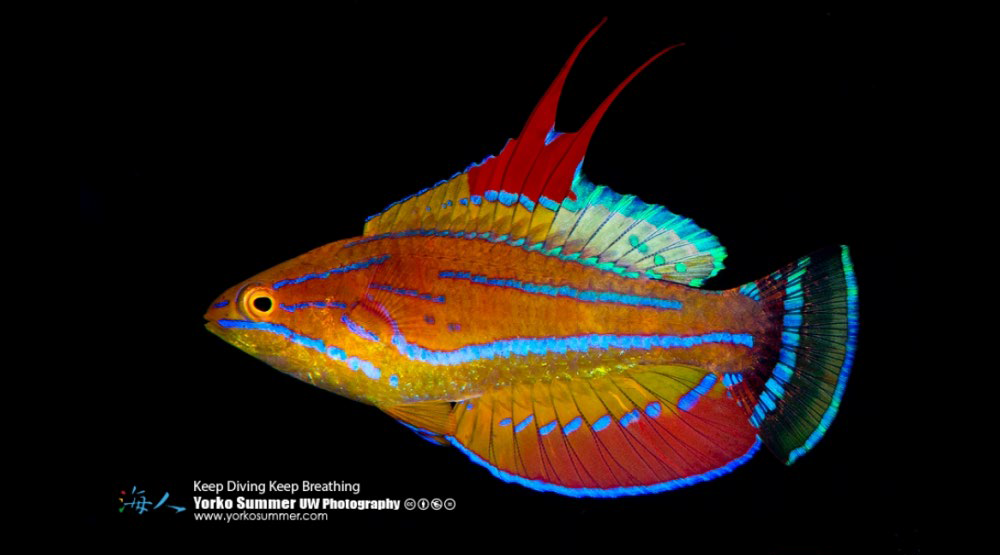 The Wrasse family is a large and diverse group of fishes with many incredibly interesting traits. From their nocturnal methods of protection to their ability to change sexes when needed, the wrasse is a fish worth checking out.
If you are reading this article, hopefully you have had a chance to see a beautiful white sand beach. Ever wonder where the sand comes from? Your friendly neighborhood Wrasse could actually be a sizeable contributor. The diets of many wrasses contains coral polyps. When a wrasse ingests these coral polyps, they also take in some of the coral’s skeleton. The skeleton passes through the wrasses digestive system and is turned into sand and then pooped out. How’s that for processed food?
There are over 600 species of Wrasse. Most of them can be found in a variety of bright colors. Many of them have distinct patterns that radically change during multiple life phases. The most distinct of these differences being between the juvenile and adult phases where the two can look like completely different fish. Most species are less than 20 cm with the largest of the species, the Humphead wrasse, measuring up to 2.5 m.
Wrasses live in both tropical and subtropical waters. They are found in the Atlantic, Indian and Pacific Oceans. It is not uncommon to find them in shallow waters darting in and out of reef and/or rock structures voraciously searching for food. Their diet consists of everything from coral polyps and small crustaceans to sea urchins.
Some species including the Bluestreak cleaner wrasse, Labroides dimidiatus, take advantage of the discomfort of other fish to fill their bellies. By colonizing various locations on the reef, they establish so called “cleaning stations”. Visitors to these stations, often predatory fish, allow the cleaners to access their body surface, gills and sometimes their mouth in order to have parasites and dead skin plucked off. Through this process, larger fish are cleaned and the cleaners are provided with an easy meal while giving photographers a chance at some interesting behavioral shots.
In addition to their unique feeding habits, some wrasse species have unusual bedside manners to protect themselves as they sleep as well. Some employ the standard method of seeking out of an unoccupied hole while others burry themselves in the sand. Many species actually secrete a mucus cocoon over their bodies at night in order to disguise their smell from predators.
One of the most interesting wrasse traits is their ability to change sexes based on the need to procreate. In some species of wrasse, a harem of female wrasses is generally managed by one large male. If the male is removed from the group, the largest female begins courting the other fish and becomes a male.
When you see a slender fish darting around along the reef with purpose, don’t hesitate to stop and watch. You might be lucky enough to see one of the most interesting fish in the sea, the wrasse.