Holidays have begun by now, and I’m here for the umpteenth consecutive year on Elena, the boat of the Sheikh Coast Diving Center in Sharm El Sheikh, in company of new and old friends, looking for a new adventure.

The whole group welcomes the guides’ proposal and the boat is heading towards Tiran, overtaking the atolls of Gordon, Thomas, Woodhouse and Jackson. After a few minutes of navigation, we start to glimpse the surface of the metallic parts belonging to the Million Hope wreck.
The Million Hope was a huge cargo ship with 5 large holds and 4 gantry cranes mounted between the tanks for load handling, built at Koyo Dockyard shipyards at Mihara-Hiroshima, Japan in 1972. Originally launched as Ryusei Maru, it began its activity as a cargo ship sailing the commercial routes connecting the Far East with the West, at the service of different companies.

It was sold and renamed six times over the years: Pacific Royal in 1975, Linngsbon in 1981, and Feng Shun in 1987, to acquire its latest name, Million Hope, in 1996 when it was sold to Aksonas Shipping Company of Limassol, Cyprus. 175 meters long and almost 25 meters wide, it could navigate at a speed of 17 knots thanks to a single shaft and the thrust of two 6-cylinder, 11,000 horsepower diesel engines.

Sailed from the Aqaba port in Jordan on June 19, 1996, the next morning ran aground on the reef near the Nabq coast, a few miles north of Sharm El Sheikh, carrying 26,000 tons of potassium and phosphates, more precisely 15,000 tons potassium and 11,000 phosphate. An aura of mystery wraps, still today, the causes of the accident. Versions indicate the main causes in smoke caused by a fire in the superstructure on board the ship, and the high speed under low visibility conditions. 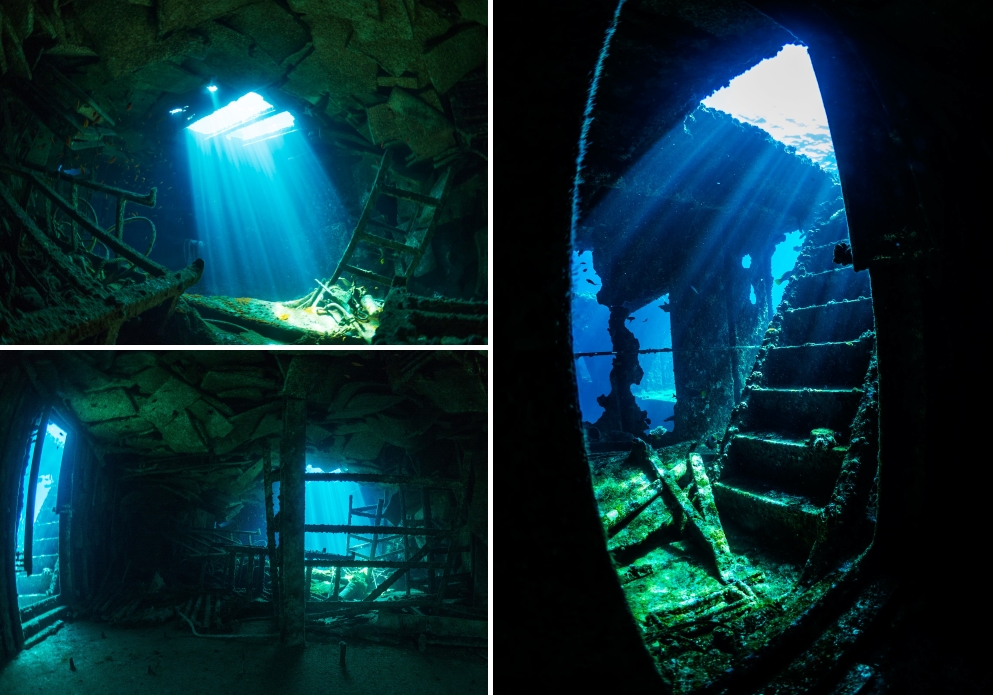 These conditions, or the combination of both, resulted in a drastic reduction in visibility, which led the Million Hope losing its course for a few degrees, causing it to aground on the reef. All the crew, mostly Filipino, clung to the stern of the ship and refused to abandon it, until the time of the tragic epilogue. Egyptian ships and other vessels, in a joint operation that lasted more than 20 hours, rescued all the 25 crewmembers.

The Egyptian authorities were also worried about the contamination and deterioration due to the oil and fuel spill from the ship.

Fortunately, a rescue operation removed the ship’s load before the sinking and therefore the leaks were minimal/not large.

The Million Hope, the second largest wreck in the Red Sea, lies in sailing trim at a depth of 24 meters, with the main deck at about 6 meters and the starboard side parallel to the reef.
The hull is broken into two in the central part and a large amount of the superstructures, like the four large cargo cranes that for many years protruded out of the water, were removed during the reclamation work, as well as the huge propeller and the helm blade. At the bottom, around the ship, there are steel objects, remains of the Hey Daroma, a ship that sank in the same place many years before the Million Hope.

Everything is ready: marine and weather conditions are excellent, this being a place beaten throughout the year by strong winds and waves.

Divers are subdivided into groups according to different needs and experiences: photographers and video operators, rec-divers with mono-cylinder, technical divers with bi-cylinder and scooter, and each guide carries out a briefing to his group. All the equipment and gears are ready and divers, including myself, are all eager to get into the water. We dive under the surface of this transparent water mirror, leaving behind us the still visible external images, distorted by the sea movements.

First, we head to the left of the wreck at a depth of 24 meters, at a huge crawler crane colonized by hard and soft corals, and hundreds of species of fish, especially Lionfish, that have turned this metal conglomeration in their natural habitat.

A mysterious environment that does not belong to the outside world, where I am the guest and to whom I must bear tremendous respect. 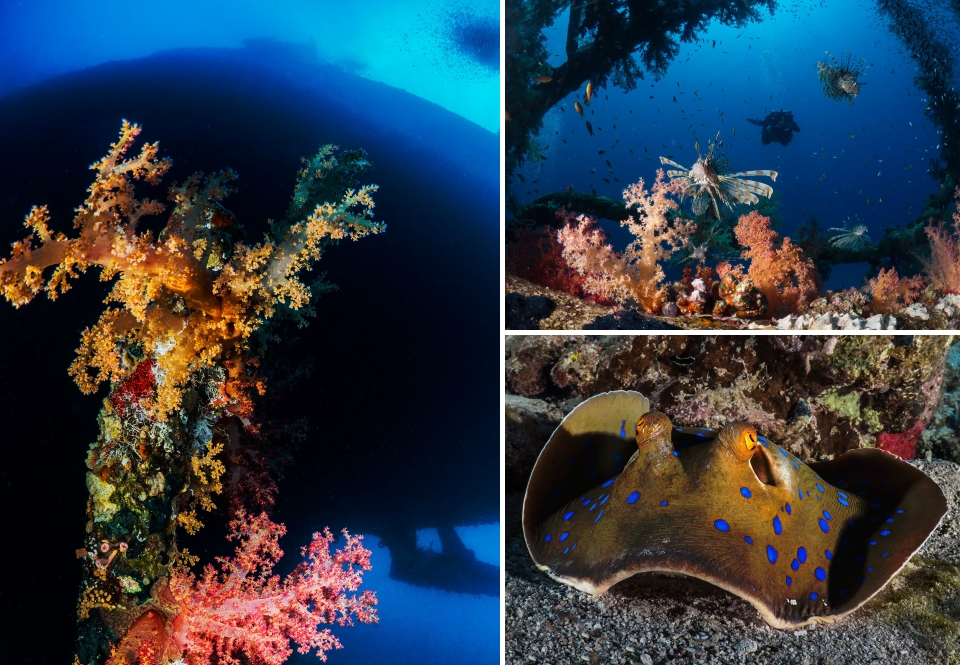 During the descent toward the depth, where images blend and the only reference remains the sunlight, we become witnesses to a tragedy of the past.

Time stops underwater, only silence and stillness surround us: there is only you, together with your buddies, astonished by the remains of this great witness of history. We start swimming along the left wall of the huge ship that we could hardly see in its entirety, and overcome the area slashed by the impact, penetrating the hull and the cargo holds.

Then, getting up for a few meters, and heading towards the stern deck near the bridge, the guide leads us to the housing and workshop areas, where we can still see, thanks to the light of our torches, old desks and phones, huge mechanical wrenches, milling and grinding machines: testimonies of human life inside the cargo ship.

The day is sunny and the abundant light filtering from the many portholes and slits makes the atmosphere inside the wreck somehow mysterious, magic and almost unreal at the same time – an ideal place for photography enthusiasts like me.

In the shadows of the passages between one room and the other there are many animal species that made this mass of iron their world.
Now it is a job for my photographic ability and my sensitivity to trying to immortalize this world and freeze the emotions through my shots, in order to share them with friends, loved ones or those who share my same passion.

The shots follow one after the other, until the shortage of air in the cylinder requires the controlled ascent procedure toward the surface.
This sport is able to give you extraordinary and special emotions. 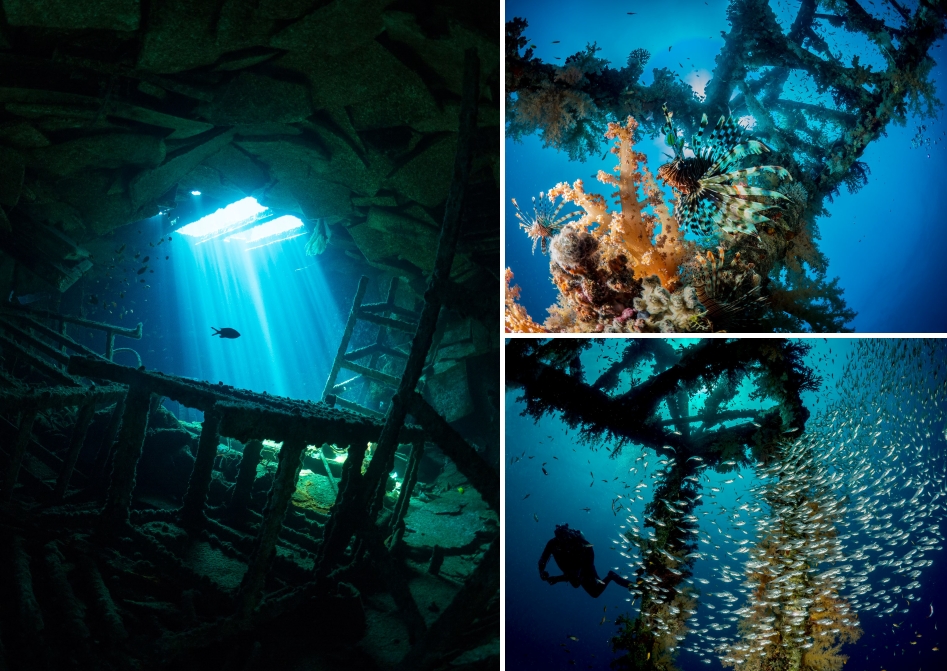 When practiced in the company of a group of incomparable friends, led by an excellent team of professionals to make it safer, scuba diving allows you remember these amazing adventures as unforgettable experiences of life.
Underwater there are no didactics, schools, languages, cultures, religions or places of origin: it is always and only a large group of people, old and new friends and acquaintances…
A unique group, a special sport where there is no competition but only a wonderful collaboration, where we have fun and joke with friends, creating wonderful memories!

A unique staff who, with a smile and a joke always ready, is attentive to fulfill your every need both as a diver and as a person, from recreational to disabled divers, from the technical to the video operator or the photographer, all without neglecting security.

Competent scuba diving instructors, fun and reliable guides, professionals and friends to refer to, to embark on a new adventure every day.

A special thanks to Paola Piccini for the impeccable organization of this holiday, to Pierpaolo Peluso, friend and excellent underwater photographer, always ready to devote me time for advices and new photographic challenges, and to rejoice for the daily progress of an amateur like me, shot after shot.

Last but not least, thanks to Rocco Aniello De Sosa, Massimiliano D’Accampo and Maurizio Ridolfo for their valuable advices on assembling gears, technical diving and scootering in company.