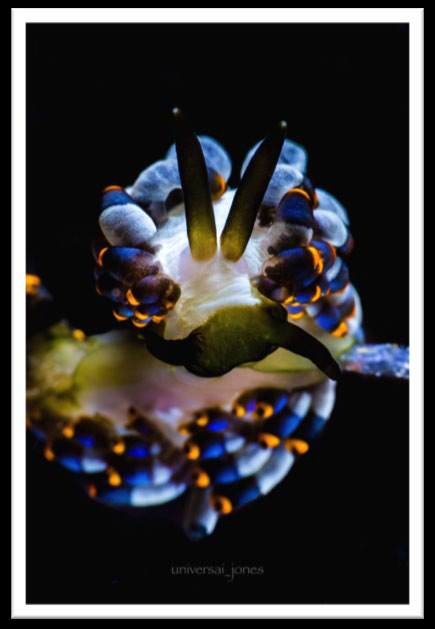 Thus still today I can photograph Cuthona sp.13 or be with others who do and the guides will still say, while looking at the back of the photographer’s camera “Ah! Yes, Cuthona yamasui, nice one…”. I guess ‘yamasui’ sounds much more exotic than sp.13 and the information available for the layman on say google reinforce this misconception.
Now while I hopefully have enlightened you on the ‘real’ yamasui (pictured above), my actual motivation is to share with you the Nudibranch of Anilao, Philippines on a monthly basis. I am living in Anilao and as part owner of a newly established UW photography school/resort, I am in a prime positon to bring the readers of Scubashooters a month to month feature of the marine gastropods, or more specifically, nudibranchia I have found within that month.

Cuthona sp 13. nssi is the species I am introducing this month and the reason I wished to clarify the misappropriated identification that is discussed above.
This reasonably sized Nudibranch of the Aeolidaceans sub genus of the nudibranchia family is widely distributed throughout the Indo-Pacific region. The Aeolidaceans are the group of Nudibranch that have finger-like gelatinous protrusions, called cerata, running down the back of the body. This is opposed to the other main group of nudibranch, Doridaceans which have the feathery gills extruding from the lower back section of the body. With Cuthona sp 13, these cerata are colored from a rich indigo blue along the sides, to an almost faded creamy bluish green down the very centre. Towards the tip of each ceras is a yellow/orange ring with a darker blue at the very tip.

Cuthona sp 13 feeds upon the hydroid Macrorhynchia philippina, commonly known as stinging or fire hydroid/coral. It has been shown that hydroid feeding Nudibranch of the Aeolidaceans group are able to pass the stinging cells of the hydroid through their digestive system undigested and deposit them into the tips of their cerata.

This stinging cell acts as a protection for Cuthona sp. 13 similarly, as it does for others in this group.
The main two groups of nudibranch, Doridaceans and Aeolidaceans are food source determined as Willan and Coleman explain that the food source plays a big part in the life cycle of nudibranch, “Those nudibranch that feed on slow-growing organisms that are common and ‘predictably present’ live for around one year” . But in contrast the Aeolidaceans, including ‘our’ Cuthona sp 13, that eat, as Willan and Coleman describe “transitory organisms (such as hydroids…that bloom briefly…) have a very rapid life cycle lasting 6 weeks or less” Now while this comes from a very good source I am not sure of the totality of this and it is surely far from exhaustive. I know first-hand of the seasonal nature of many nudibranch species around Anilao and also see a direct correlation with water temperatures which in turn may also directly affect the food sources. Though, while I am no scientist, I do see certain nudibranchs that are regularly found on the same hydroid in the same location for quite some time.
Also the size of some Cuthona sp. 13 are quite large up to 5cm or more, which would lead me to think they are living longer that prior thought. I will be discussing this in further articles pertaining to other nudibranch types in the months to come.
Köhler, E. (2016), published 18 January 2016, Trinchesia sp. 41 Genus: von Ihering, 1879 available from http://www.philippine-sea-slugs.com/Nudibranchia/Dexiarchia/Trinchesia_sp_41.htm
Willan, RC. and Coleman, N. 1984. Nudibranch of Australasia. In http://www.nudibranch.com.au/aboutnudibranchs.html

WORDS and PICTURES by Jones Wayne and Linda Ianniello