The Umbria Wreck Wreck-Dive in Sudan 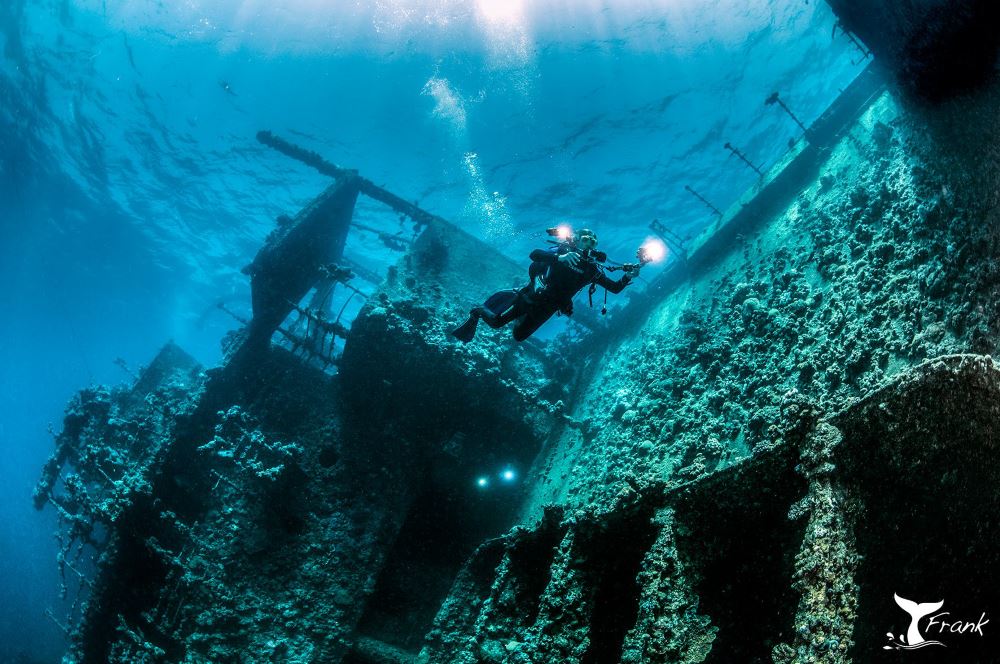 When one thinks of Sudan, he initially thinks of an arid and wild land, with immense deserts and great savannahs.
It is the largest African country but today, unfortunately, wars and famine torment it. Yet it is also rich in traditions, cultures and full of history, as evidenced by the archaeological ruins in the north of the country.

Moreover, Sudan boasts a beautiful sea, full of life and magnificent islands, hosting one of the most beautiful reefs in the world. In this context, where you can make unforgettable dives and encounter huge schools of hammerhead sharks or, if you are particularly lucky, even tiger or whale sharks, you can make a unique dive in its kind: the Umbria wreck.
The Umbria is certainly one of the most beautiful approachable wrecks for visiting, even more if you consider that it is possible, still today, penetrating inside and that the depth is accessible to every degree of diving expertise. 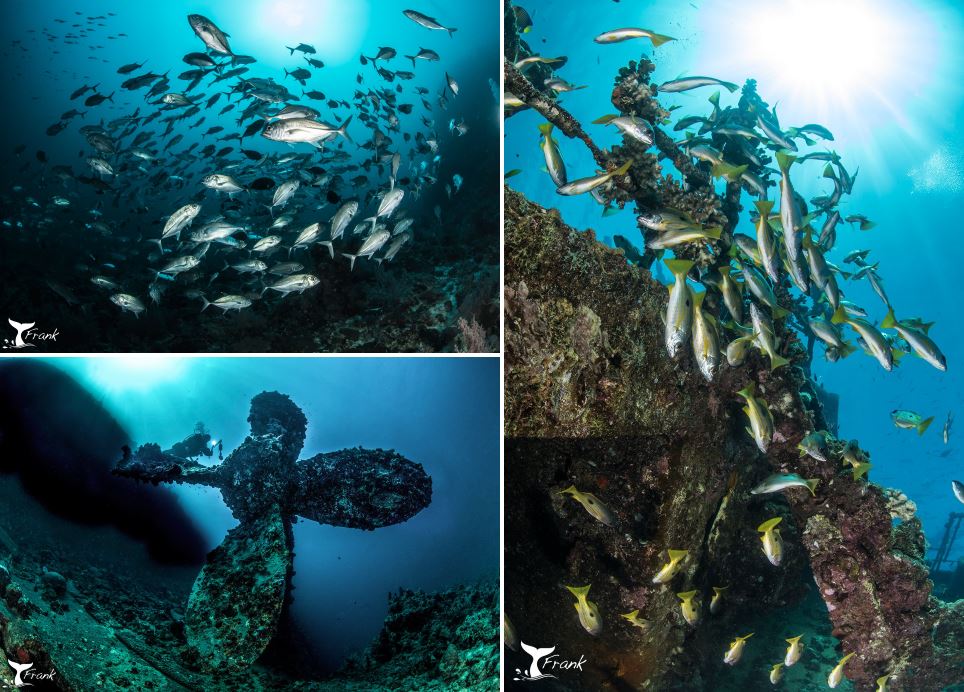 Furthermore, its sinking has a history that does not arouse a vein of sadness, as it happens for many other wrecks, especially of this significance, but represents one more reason to discover every corner of the ship.

Because this it is: a big merchant ship with a tonnage of 10,128 tons, a length of 155 meters and a width of 18 meters; with a triple expansion engine of 4300hp and 2 large 4-blade propellers.
Its history begins in 1911 in Hamburg: launched with the name of Bahia Blanca to operate in Argentina, in 1935 the Italian government bought it, changed its name to “Umbria” and allocated it to troop transport.

In 1940, the Umbria had the mission to carry a huge load of goods, including bombs, lot bullets, guns, various military equipment and even some cars, the legendary “Balilla” Fiat 1100, to Eritrea.
After passing the Suez Canal, some allies’ ships, the English “Grimsby” and the New Zealander “Leander”, began to follow the Italian ship under the guise of an anti-smuggling check boarded, and blocked the Umbria’s trip. 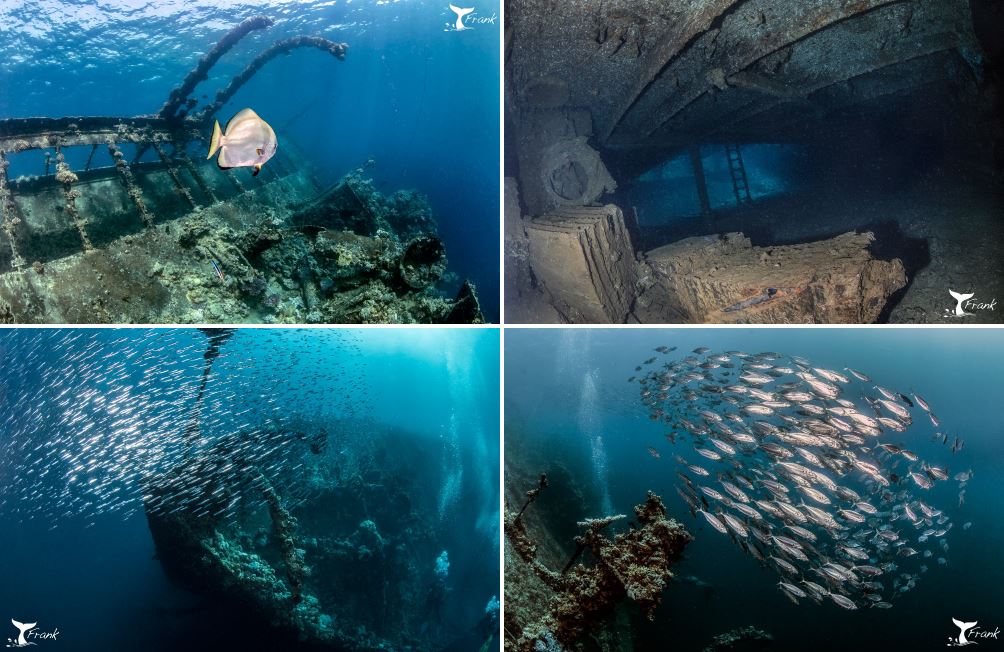 The next day, the fateful June 10, 1940, commander Lorenzo Muiesan at 5:00pm local time goes back in the cabin after a ship check, turns on the radio and hears a broadcast from Addis Ababa announcing, “Extraordinary broadcast for the troops of the Empire and the AOI workers. The war will be declared at 7:00pm. Hostilities will begin at 00:00 “.

At that point, he gives the order to burn all the compromising documents and informs Zarli, his first officer, about the need to sink the ship before the Allies can take possession of the cargo.

While the chief engineer, in spite of himself, provides for the sabotage, someone warned the English lieutenant that a normal rescue exercise would take place.
In the engine room, the two cast iron wolf-shaped main seacocks are broken, such as the auxiliary one and the watertight door of the shaft-tunnel, thus provoking an immediate tide of incoming water.

By now sure of the sinking, commander Muiesan gives the order to actually abandon the ship, warning the English lieutenant to do the same.
Some stories also tell of the mutual compliments exchanged between the two officers as they left the ship, and of the rescue of the cat, the crew’s mascot.
Thus, the rich load of Umbria sank within two hours, averting the risk of falling into enemy hands, but costing the crew five long years of captivity in a foreign land.

Today the wreck lies at a depth of around 30 meters at Wingate Reef, in Port Sudan waters. Its location, protected from waves and tides, made possible through decades the settlement on the wreck of sponges, corals and fishes, turning the Umbria into a paradise for divers and one of the most beautiful and evocative dives.
The hull is almost completely intact, with the right side wall just below the surface and the four cranes almost outcropping.

Going down aft, you are immediately in front of the rudder and one of the two gigantic four-bladed propellers, with the ship’s hull losing itself in the blue at the left.
Going on, you meet the holds containing the bombs and the projectiles still stored, while on the bottom there are the abandoned lifeboats. Following the side of the ship on the right, you reach the hold that contained the various building materials and the legendary Fiat “Balilla” 1100.

The passage is sufficiently wide and not difficult, even if the inclination of the ship makes the use of the camera more complicated and the suspension makes things worse.
Some of the three Fiat still have undamaged headlights and intact windows: they are a sight! In the next hold, there is an expanse of wine bottles and other plane bombs, while in the latter there are tires and large skeins of electric wire. 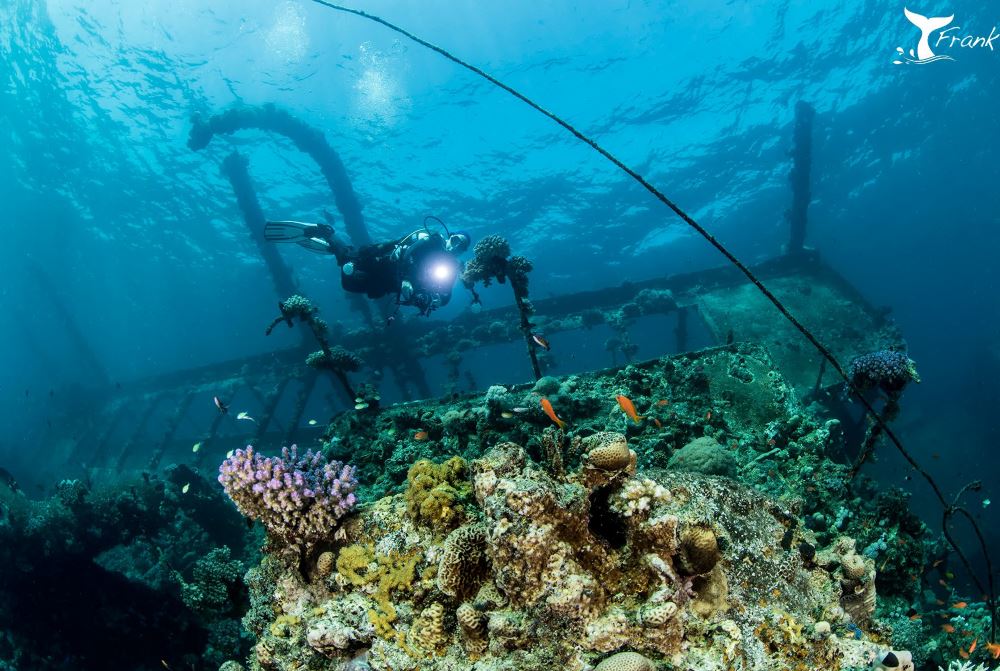 From here, you can go back along the main bridge to reach the first class walk and visit the various rooms, including the officers’ hall and the restaurant.
Every point on the ship is an emotion, and the thought that even recently several artifacts have been found, such as Ginori porcelains or teapots pertaining to the onboard restaurant service, makes everything even more fascinating.
Nevertheless, the beauty of this dive does not end with the penetration: every point of the hull is full of life: it looks like a huge metal reef, from the bow with its swirling schools of silversides and fusiliers, to the little clown fishes and their anemones clinging to the bulkheads.

From the batfish passages as curious scrutinizers of the wreck, to predators such as hunting jacks, in this evocative metal forest, from small groups of fish of various species, to the colored bulkheads, thanks to the corals colonization.

So much life that makes living and phantasmagoric a wreck of such magnitude and that, for better or for worse, is part of Italian and world history.

WORDS and PICTURES by Franco Tulli