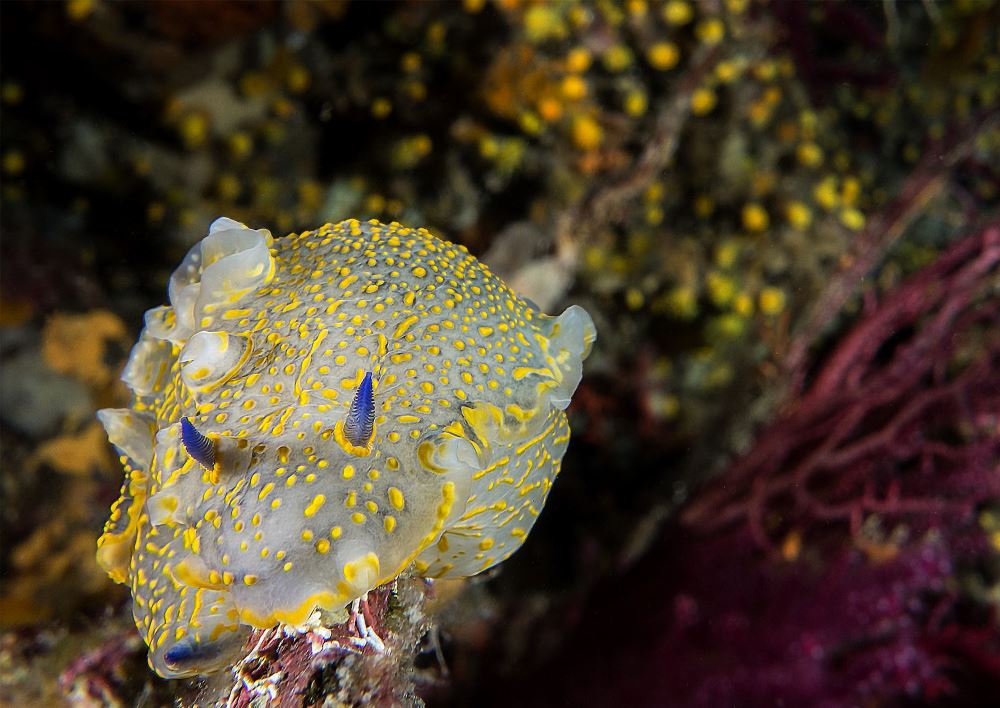 The painted Doris (Felimare picta) is a nudibranch belonging to the Chromodorididae family.

It is one of the families most numerous and common, consisting mainly of medium or large size specimen, characterized by elaborate and glittering colors. They feed on various types of sponges, so it is useful to know the specific diet to know where to look for given individuals.

Carnivorous, and very often monophagous, they have long and crawling movements although extremely graceful.
As you may know, all nudibranchs have rhinophore (cephalic appendages with sensory, tactile and chemo-receptive functions) located on their head, a buccal appendix, a scraping radula differentiated from species to species depending on the type of food they feed on.
Other characteristic features of the family to which our friend belongs, are the elongated ovoid shape and the presence of a pseudo-branchial tuft at the terminal end of the body, more or less noticeable and more or less retractable. Toxic, or anyway with an unpleasant taste for a possible aggressor.

They have few predators, which means that they do not need to camouflage with the surrounding environment but indeed they flaunt flashy colors in order to attract attention and signal their presence: the so called aposematic (or cautionary) colors.

After introducing the family, it is now the turn of our story’s protagonist: endemic to the Mediterranean Sea, the Felimare picta prefers habitats characterized by rocky or debris bottoms up to a maximum of 50/60 meters depth, where it moves at a fairly low speed, compared to some of its fastest kin such as Felimare villafranca.
Of considerable size (it can reach 15/20 cm in length), it is also easy to encounter in Posidonia oceanica meadows and tends to prefer sciaphilic environments. Recently I found it even in precarious equilibrium on a branch of a red sea fan (Paramuricea clavata) on a vertical wall.

Formerly known with a long series of names (the last, before the revision of the genus carried out on molecular studies basis in 2012 was Hypselodoris picta, still accepted as a synonym), it exhibits a strong chromatic variability from one individual to another. Pattern and colors paint it with spectacular shades of blue, whitish, green and purple, with stripes, spots and dots of bright yellow covering it for its entire length. The “head” has small buccal appendages in the lower part, and the rhinophores in the upper. 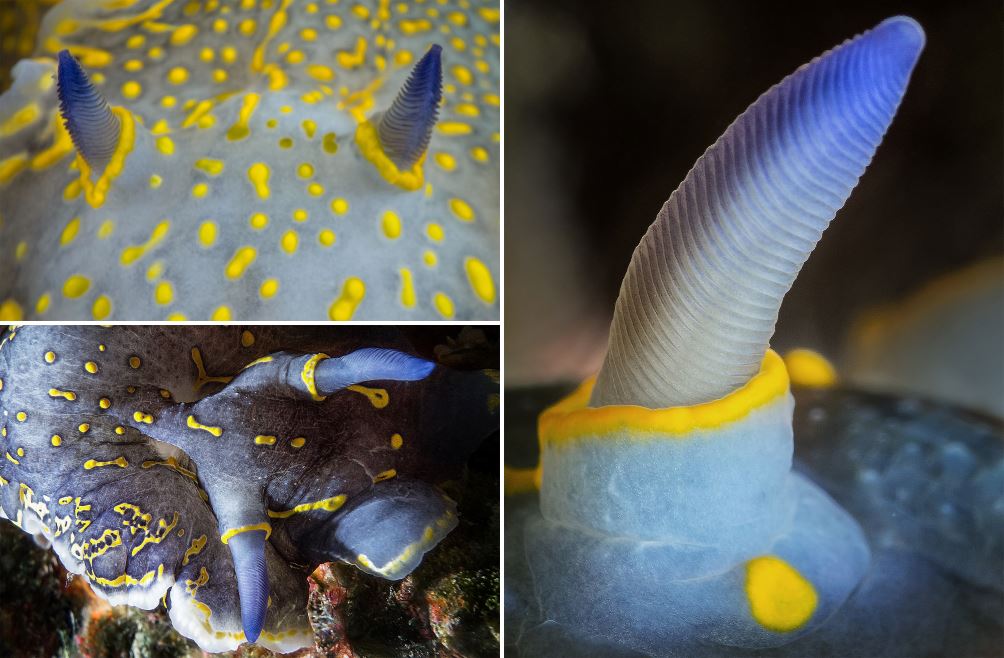 The latter, of blurred blue color (the darkest part is always located at the end), have twenty to thirty oblique lamellae and are delimited by a yellow ring, residue of the coloring typical of the juvenile form, at the base of the sheath that accommodates them when retracting. In the cephalic area, and in the caudal one, they also have subcutaneous vesicles capable of releasing a toxin, useful to scare away a possible aggressor. The mantle has sinuous reliefs and a yellow border sometimes even very marked, clearer towards the ends and the underside.
The mantle does not cover the foot, which is well defined and easily identifiable although characterized by the same pattern as the mantle itself. In case of danger, the foot contracts toward the front of the body giving the nudibranch a rounder appearance. The branchial tuft, located in the rear part of the body, consists of a dozen pseudo-gills, which they retract on any threat perception, either predation or a simple disturbance by the “human” element.

But don’t worry, since the picta tends to tolerate with a certain elasticity the curious and photographers, compared to its other cousins: just think of how fast Peltodoris atromaculata – the famous sea cow – retracts its gills and rhinophores, being extremely sensitive to light variations and displacements of the surrounding water mass.

You will have time and opportunity to observe and photograph it with no hurry. Each pseudo-gill, often of a slightly less marked color than the body, looks like a small feather and has a thin yellow stripe running along its entire length.

The radula is the fundamental tool for nutrition, located at the underside of the nudibranch, “behind” the buccal appendices, and effective in scraping the sponges’ surface In fact, the painted Doris feeds on sponges, particularly on Ircinia, Dysidea (mostly) and Crella genus, and on their symbionts (cyanobacteria photosynthesizing). In that way, it satisfies its energy needs succeeding at the same time to increase its defenses, enhancing the internal toxicity and making itself a particularly unpleasant bite for potential predators.
The presence of such a defensive mechanism makes the mimetic capacity, which other mollusks need, unnecessary for the picta: the coloring itself warns predators that, since this prey does not need to hide, they will not enjoy it. 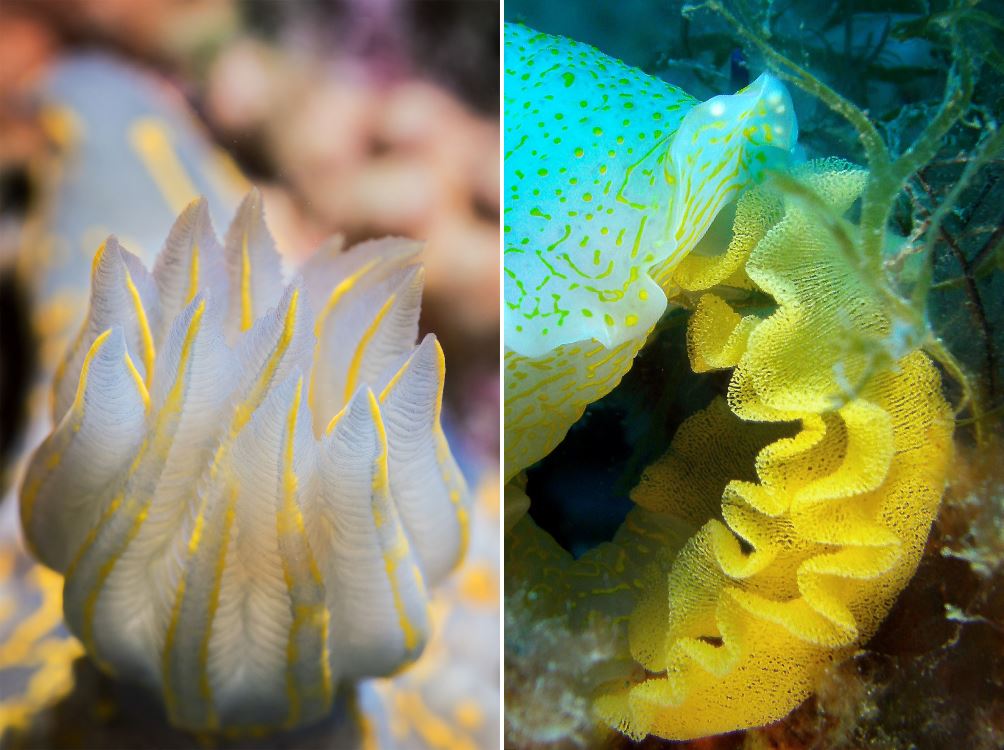 According to some biologists, differences in feeding would result in variations in the mantle’s color, and the particular shape of the radula would provide yet another species identification criterion in doubtful cases. Let’s now talk about some spicy detail: like other nudibranchs (in particular, all belonging to the genus Felimare), the F. picta are simultaneous hermaphrodites. This thus means they have active both male and female sexual organs. For reproductive purposes, a contact is necessary for there to be an exchange and fecundation of gametes.
Placement on the right side of the genital appendage causes the coupling to occur in a crossed manner. Often, during the reproductive period (May / August in the Mediterranean), you can even witness short chains of individuals waiting their turn to fecundate each other. Eggs are laid in a mucus band that holds them together and protects them, securing them to the substrate chosen with a spiral-shaped layout.

The coloring is characteristic, and it appears in various shades of yellow: once opened, they will release the veliger larvae that, after a short pelagic phase, will undergo a metamorphosis becoming adult individuals. The photos in this article were taken in the Ligurian Sea: some in the Marine Protected Area of Portofino (GE), others between the Santo Stefano shoal (IM) and the Bussana’s Lighthouse shoal (IM), places rich in biodiversity. The encounters have a fairly marked seasonality: from the immediate pre-reproductive period – in April – until late September, although not lacking in other periods of the year. A curiosity to notice: at the eastern slope, I always and only came across lonely individuals, while at the western my encounters were usually with multiple individuals during the same dive. 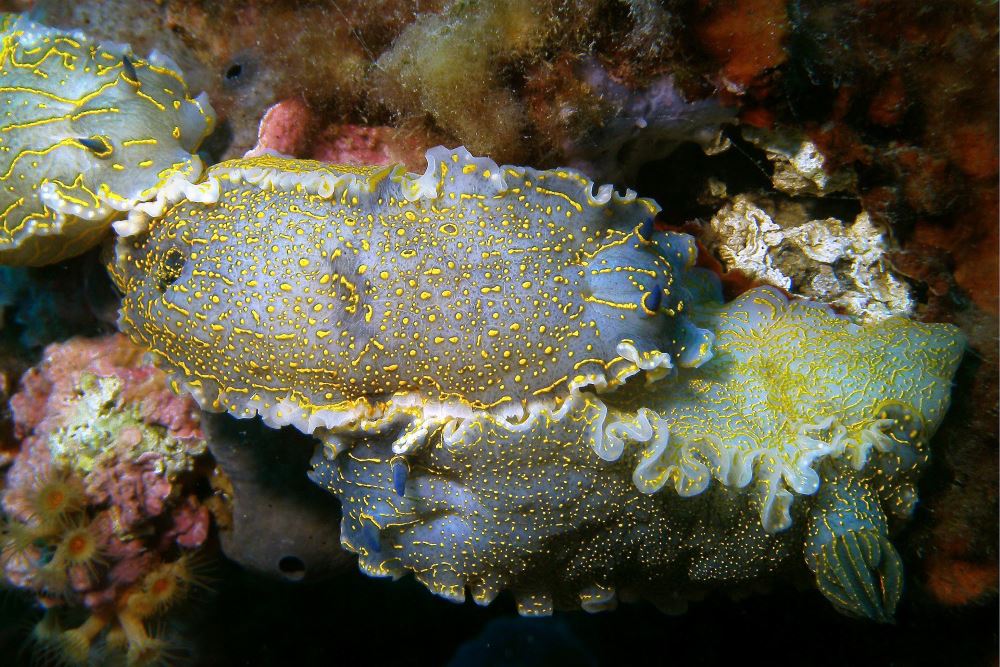 Easy to locate given the size quite noticeable, it can make us smile thanks to the sometimes undeniably pompous poses it can assume, and its brightening colors fun to portray. As a sea lover, I cherish the hope that by learning more in detail the characteristics, habits and peculiarities of its inhabitants, divers can enjoy in a more complete and conscious manner the encounters with these beautiful organisms, which contribute to giving gaudy colors to this so underestimated Mediterranean Sea, which instead is able to donate incredible colors and emotions to those wanting to deepen their knowledge. The virtuous circle of knowledge, respect, protection, and – ultimately – love for the underwater world, can return in part to the Oceans what they donate us emotionally. Love, learn, respect, protect.